He kinda hints to the fact that he has bad talked the game on stream which is what lead to it. Don’t think anyone can blame him though with the way the game is in it’s current state. 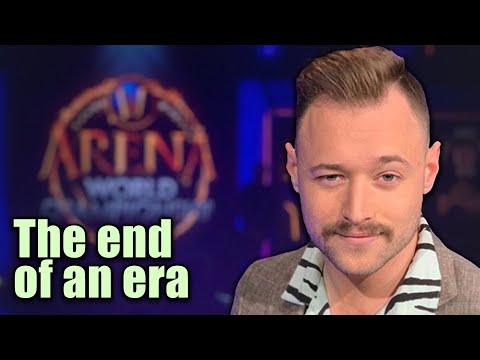 Well if they fire him then Im done watching the AWCs. That girl they replaced him with was BORING as watching paint dry. AWC RIP you will be missed. Big mistake from the woke blizzard.
The reason this company hasnt improved the game in years is because they created an echo chamber where decent is punished.

Personally not interested as much in the tournaments without him hosting. I also thought this would happen catching some recent Allcraft videos and hearing him criticize the game. He is obviously passionate about the game and it wasn’t done in a hateful way, but I suspected Blizzard would punish him.

And that girl was knowledgeable? Yeah OK… Rich is a huge fan favorite.

But all of those guys from time to time have commented on how terrible the state of WoW is. Seems very odd they would remove only Rich.

I think rich was the best commentator there; He went out of his way to include other casters and moderated really well giving everyone input. Definitely not as experienced or knowledgeable as the others, but much more enjoyable as a person.

However, if we see things like rich, ven, supa, healingstat, ziqo, and so much of the community speaking ill of pvp then MAYBE blizzard should make more than one change every year

But all of those guys from time to time have commented on how terrible the state of WoW is. Seems very odd they would remove only Rich.

No where near the level at which Rich does it. It’s not even remotely close.

That meltdown was really bad to be fair so I’m not surprised. Covid probably got to him pretty bad

Rich def spergs out pretty hard, says some weird furry stuff too. He is fun to watch in those scuffed events tho with asmon and esfand, but I can totally see why Blizz wouldn’t want him representing their brand

lmao damn… yeah i would fire him too after that one. bummer for him he did that on stream

Classic. This is how I feel after 5 minutes of arena too.

Yeah like there’s a huge difference between commenting how bad the state of the game is and that. It’s a shame because based on OP he really did seem to like it but I think he’s super stir crazed and needs the forced break.

Classic. This is how I feel after 5 minutes of arena too.

I mean this is perfectly normal while you’re fighting an MLX to be saying those things but in the heart chamber? Watch how you speak around mother.

Feels like watching a CNN clip. Need to see the full video for context. I might try to find it later as the date on the calendar is the 27th. Maybe it was just him being over the top for the show? See that stuff all the time.

I mean hes not wrong… lol

OH MY I JUST REALIZED Me AND RICH HAVE THE SAME HAIRLINE. I HAVE A BIT MORE HAIR THEM HIM BUT WOW.

I like them both bro, but you’re so stupid if you think game knowledge even matters in that role. It’s always been irrelevant. She’s worked her way through a lot of different roles and she’ll be a great host. She did tons of good interviews at the last Blizzcon and previous AWC.

Just because you love Rich doesn’t mean you have to hate Eiya lmao.

I swear half of you don’t even understand the difference between the host and any of the other casting roles. None of them talk in the games. They direct the broadcast. Anyone mentioning not knowing game knowledge when it was never something Rich displayed is likely just reaching for something.

This was for both of you guys talking about it, not just you btw. It’s just always such a cringe comment to see.

I mean, he was just a host. He asked the other casters questions and talked about the teams. He wasn’t like Ven or Supa where he had to cast mid game everything that was going on.