Elves and DK players, how do you feel about it?

They’re just disabled right now. They will return, hopefully looking better than they previously did before.

There’s going to be a change in the way eyeglow works (hopefully for the better), and the first step to make that happen was to remove the old eyeglow.

The next step will come in a future 8.3 build.

I hope it stays or is optional. I HATE being locked into blue glowing eyes for my DK.

We expect to update brightly-glowing eyes further in future builds of the Visions of N’Zoth PTR.

They are not final and they are not being “removed”. Its still early in the PTR cycle. They are updating and bringing the older glowing eye effects in line with the modern races and still do not have the “glow” effects in yet.

And, to be honest, its been really needed… 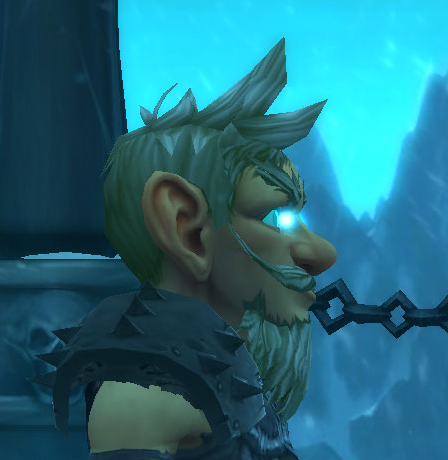 This does not look good at all, you can quite literally see the particle effect hovering in front of the eyes. Its about time it got some proper attention and were brought in line with modern eye glowing effects like the new Worgen Models (Less likely I would assume because some of the glow effect is painted directly on the textures around the face from my understanding) and Zandalari Models.

So to recap, glowing eyes are not being removed but are being re-worked and as Kaivax said its still a work in progress and not fully implemented yet.

I really hope we get to keep the option of dimmed eye glow. Or I hope eye glow is seriously toned down. I miss my original golden eyes on Belfs. And I really like how the glow is gone on other races during this change.

Will the literal fire in my eyes stop glowing? I mean im cool with it…i guess. The logic just confuses me.

Hopefully they are fixing and not removing them, because glowing eyes makes Elves more unique and flavorful compared to other races.

And i want some different eye glow colors for Void Elves, because we’ve seen Void manifest in so many colors in the game, but we’re stuck with this weird bluish white.

I just hope my male night elf can keep his headlights. They really do make him look fierce.

I didn’t even notice, it shows how often I actually look at my characters face.

The logic just confuses me.

Demon Hunters had their eyes ritualistically carved out and replaced with orbs of burning fel fire that replace their vision to see different types of magics in colors while the rest of the world is in greyscale.

I want my high-beams back I wanna cause mount accidents on the crossroads again.

This is just the first step to give Blood Elves blue eyes!

It isn’t that they are being removed. They were removed as the first step to accommodate new eye glows. If you look at a sideways picture of a DK face, the glow is just two particle orbs floating in front of the actual eyes and it looks okay from the front.

The new glows will be incorporated into the eye, like Worgen have.

Blood elf green eyes already don’t glow that much, so I doubt they’ll be affected as much.

What we’re seeing in the current PTR build is just the beginning, and we’ll likely see what they intend to do in a later build.

I, for one, hope they’ll make it so the eye glow isn’t just a ball that floats in front of the character’s eyes like it is now, and make it look like the eye is actually what’s glowing.

No i mean the logic of how my “eyes” would stop glowing. Because they are literal fire.