I mean your living rent-free in blizzards head, I mean thats all I care about people like you paying for my devepolment, cause unlike most people here who hate the game I like it, so all of you are just paying for something you dont like and supporting my addiction so thanks, you are even supporting my argument addiction

Why play the game if it’s gonna get retconned

Cuz it sparks joy for you personally as a person?

I think the argument being made is that because Warcraft is a long running and ever evolving franchise, there’s not one single work that’s always going to stand as “perfect uncontradicted canon” forever.

The franchise has always operated in such a way that every new game, expansion, novel, comic, etc, elements of the previous entries are contradicted/retconned. Warcraft 1 might as well take place in a different universe than Warcraft 3 or the Warcraft movie. Indeed, it largely does.

So if the idea that future retcons renders this book without any value, then the same can be argued of the Shadowlands expansion, as it’s inevitable that elements of that expansion are going to be contradicted/retconned in future material as well.

But we don’t just play an expansion because of how many/few retcons it has. Or how likely it is/isn’t to be retconned in the future. Similarly, many people buy these books because they enjoy the art, stories, the world building, or collecting of the book in and of itself.

Classic/Vanilla’s been retconned to heck and back, and people still go back to it. And many are looking forward to Burning Crusade, which I’m pretty sure features more retcons (and major ones) per capita than any WoW expansion before or since.

I am aware. And that’s perfectly ok because I don’t have to play retail. I’m more than willing to pay $15 / month just for Classic.

Keep being salty though. Can’t wait for you to post more about stuff that has nothing to do with the topic of this thread.

We all like the game for various reasons Kat. Or we wouldn’t be on this forum, arguining over fictional lore in a video game. And lets get back on topic…like seriously.

thats not true, some people are just here to play the victim, THere are nelf players still mad, even tho, they are getting so much in shadowlands, they are mad cause they didnt get everything they wanted, like as if 9.0 is the only patch we are getting lol

Here’s to hoping this book sheds some light on things we don’t/probably won’t immediately see in game. Glimpses into the other, lesser realms of the Shadowlands could be really neat. Or, hell, even information upon whichever plane of existence the Brokers or those ‘Eternal Travelers’ come from.

Why does everyone always derail my threads

#WarlockStables for Demons/Aberrations, you know you want to General Discussion

Copy pasting from my Shadowlands Compilation thread in the warlock forums lol Consider: Please give warlocks the ability to speak Demonic once more. A copy of the Hunter Tame/Stable system, where either within the Dreadscar Rift (Class Order Hall, would breathe life into past content) and/or next to the Warlock Trainer in every major city, there would be a “Grimoire” that functions like the Warlock stables. Enslave Subjugate Demon becomes like Tame Beast. Enslave Subjugate Demon simply is…

Here’s to hoping this book sheds some light on things we don’t/probably won’t immediately see in game. Glimpses into the other, lesser realms of the Shadowlands could be really neat. Or, hell, even information upon whichever plane of existence the Brokers or those ‘Eternal Travelers’ come from.

There is absolutely no reason to buy this book. They took our money with Chronicle and then promptly decided to ignore it, they’ll do the same here. Blizzard has not earned the trust for me to say otherwise.

Blizzard has not earned the trust for me to say otherwise.

There is absolutely no reason to buy this book. They took our money with Chronicle and then promptly decided to ignore it,

From What's the Point of Lore Compendiums? :

What's the Point of Lore Compendiums?

Only reference I could find mention Val’kyr doesn’t call them Spirit Healers. In fact Spirit healers are not even mentioned in the 3 volumes of Chronicle.

Not all Val’kyr continued to follow Helya after Odyn’s defeat. Some of these spectral beings disappeared into the Shadowlands. The few who still retained a glimmer of nobility in their souls dedicated themselves to watching over the physical world. From within the Shadowlands, these Val’kyr would at times guide the dead back to the land of the living.

Chronicle Volume 1 Page 57
Noble Souls dedicating themselves to watching over the living realms sounds like what the Kyrian of Bastion does. These Val’kyr when disappearing into the Shadowlands could have gone to bastion and joined up.

You claim they ignored the Lore about Valkyr yet the Lore of Valkyr never actually outright mentioned Spirit Healers! You have been treating Wowpedia as if it were Chronicle itself yet it isn’t!

Someone with a Wowpedia account should rectify the Wiki’s mistake concerning Spirit Healers as the Chronicle never actually mentions them!

You claim they ignored the Lore about Valkyr yet the Lore of Valkyr never actually outright mentioned Spirit Healers!

You know damn well what Blizzard was trying to imply with that line lol “watching over the physical world”, “would at times guide the dead back to the world of the living”

How dare you besmirch Yvenathilm’s name like this.
If there’s one thing he doesn’t do, it’s ‘know’ things. He’s a ‘wildly speculate’ man, and don’t you ever insinuate otherwise.

Nothing will stop Yvenathilm on his quest to create a unified theory of entertainment media.

The part I love about Yvenathilm the most? His theories and ideas are often a thousand times better than anything Blizzard often comes up with. We should him in charge of the lore. We would definatly get consistant lore for a change

Nothing will stop Yvenathilm on his quest to create a unified theory of entertainment media. 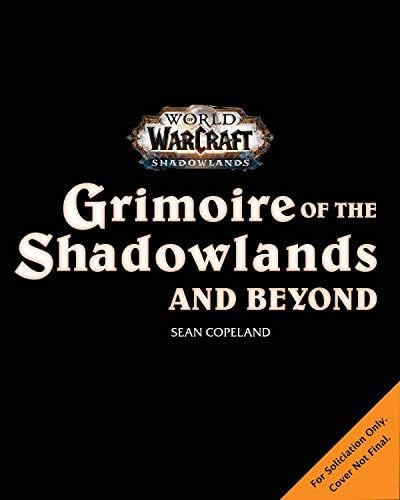 World of Warcraft: Grimoire of the Shadowlands and Beyond

Fairly large lore book. Must be the new “chronicle”

its from the perspective of the eternal ones, if i remember correctly.

I don’t really understand the point of this book outside of making some quick money. Everything that was ever written will be retconned sooner or later, because it disrupts the story the writers want to tell…and instead of trying to go around the problem with an alternative solution they use the sledgehammer.

thats their fault, because by retconning chronicle, they destroyed their own Credibility