[N-RP] The Argent Advance needs YOU for the Argent Crusade!

The Argent Crusade needs able-bodied heroes, great and small, now more than ever!
The Scourge once again rampages against the land and we must rise up in defense of our fellows and our homes!

☼ ---- What is your mission?
The unit’s primary mission is to establish a working relationship with the Horde to better facilitate and uphold the Argent Crusade’s mandate to fight swiftly and mercilessly against any element of evil that surfaces in Azeroth - which of course includes the resurgent Scourge forces, amongst others.

In light of that, it aims to be a refuge for those displaced by the Fourth War, especially those with martial skills who might not feel like they have a place with their respective faction any longer, or who never did in the first place - as such, the Advance’s secondary mission is to recruit from the Horde for the Argent Crusade.

Additionally, Argent Advance’s tertiary mission is to be an experimental joint unit of the Argent Crusade and the Ebon Blade with the purpose of attempting to mend burned bridges and damaged relations between the two organizations after the events during the Legion’s last invasion of Azeroth.

The unit is commanded by Argent Field Commander Mirchea Kul’Therin-Soltair, one of the few Death Knights under the Argent Crusade’s banner. His own personal mission is to provide a path to redemption for those who seek it, advocating for fellow Knights, other undead, and Illidari to take up non-traditional means of contributing to society and encourage personal healing and growth for those still capable of such. Any and all are welcome in our ranks, particularly those who might be traditionally shunned by society, so long as they can follow the code of conduct.

☼ ---- What Do You Do?
We support and provide a mixture of community involvement opportunities and guild-exclusive events. Some examples are:

☼ ---- How can I find out more?
You can reply here with any questions you have, or you can contact myself or any of my officers in-game or via Discord!

OOC officers handle issues, administrative tasks, and setting up community contacts for the guild as a whole. They also handle applications, interviews, and guild invites.

These officers are capable of accepting applications, conducting interviews, and inviting new people to the guild. They also head up different divisions in the guild!

…Or you can check out our website for all of our rules, an FAQ, and other goodies! 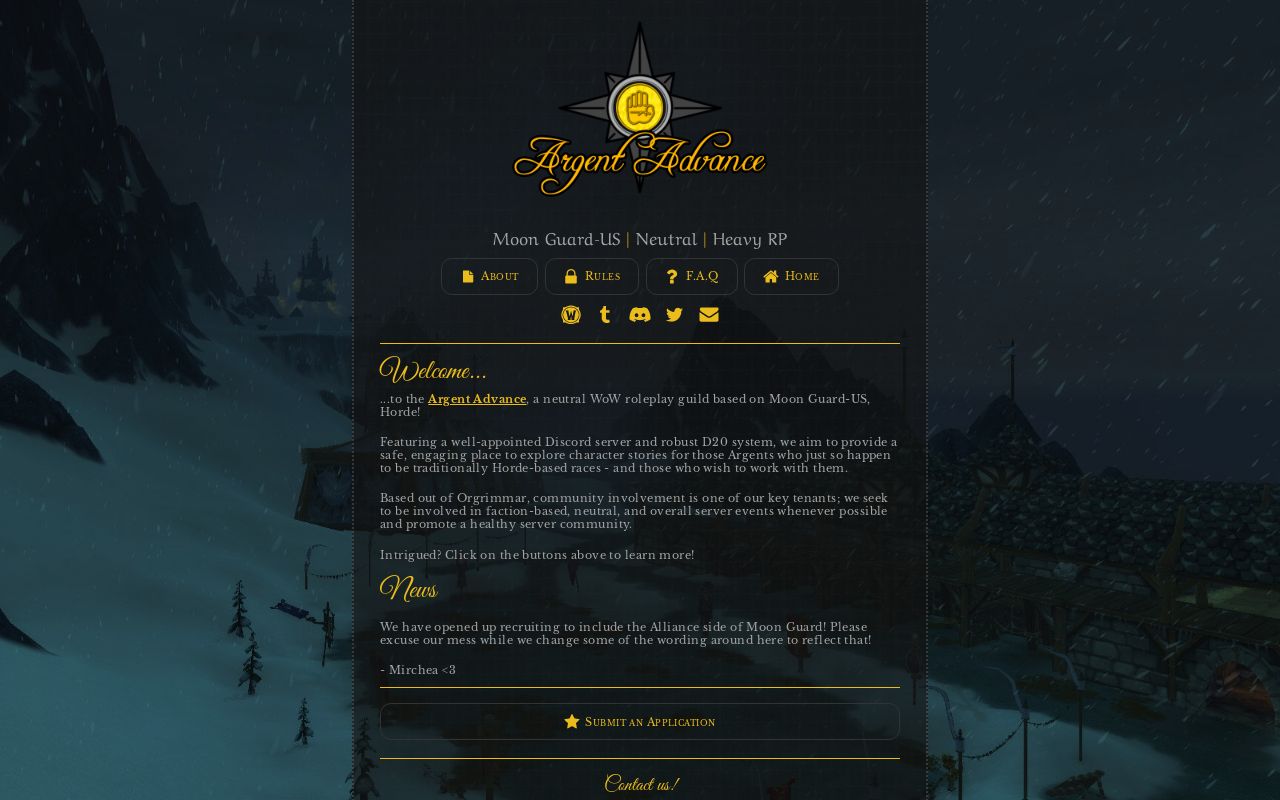 …Or hop into our Discord and submit an application!

Check out the Argent Advance community on Discord - hang out with 76 other members and enjoy free voice and text chat.

We are currently looking to expand into the Alliance side of the server as well!

☼ ---- Do I have to be an Argent?
Nope! Most of our events are open to friends of members, and sometimes the general public; we used to accept contractors into the guild, but no longer. If you’d like to ‘try us out’, we can have you join as an OOC/Alt, so you can determine if we’d be a good fit for you.

Of course, any characters attending our events are going to be expected to follow the guild’s IC Code of Conduct, found on our website linked above. There’s no better time than NOW to join the Crusade!

The skies above Icecrown Citadel have shattered and the Scourge are spilling across the globe in a coordinated effort to bring an end to the living!

The Argent Crusade has answered the call and is poised to combat this threat. It’s an exciting time to be an Argent and < The Argent Advance > is looking to bolster it’s ranks. Do you have what it takes?

In addition to quality role play, < The Argent Advance > also fosters a fun, welcoming environment for any and all. Come join us!

The CRUSADE wants YOU!

Ergot Part 2.5 - Defense of Orgrimmar will take place this Friday, November 13th, at 8:00PM ST. We will be meeting up in the Barracks Building, Valley of Honor, Orgrimmar and utilizing the Conquest D20 system - guidance will be provided on how it works once we are all gathered and the IC briefing has taken place, if you are unfamiliar.

This event is open to the public and you do not have to have attended the last two Ergot events to take part in this one (or any Ergot events that may follow).

This is a combat and rescue event. We hope to see you there!

Thank you! <3 Hopefully soon I’ll get the gumption to try and DM a neutral event and then we can have you come along!

Ergot Part 2.5 went off without a hitch thanks to my wonderful co-DMs Athelar and Krok’thar! It seems like everyone had a good time and all of us DMs learned something, I think, which is always a bonus!

The next installment will be posted here - but don’t miss us at the Orgrimmar Market and Guild Expo (this Sunday, 15 Nov, 7:30PM in the Valley of Honor), or Wanderer’s World Exchange (this Monday, 16 Nov, 8PM, Shattrath) this week! Come arm wrestle us and see if you can win some gold.

Orgrimmar Market went off without a hitch and we got a new recruit, to boot! We’ll be heading off to Shattrath’s Lower City today to recruit at the Wanderer’s World Market and ofc, offer up arm wrestling!

Instead of heading to the Wanderer’s World Market, Cdr. Mirchea found himself put partially in charge of Orgrimmar’s defense alongside several others, such as General Krok’Thar, Spymaster Dieselle, and Chieftain Algrubel, working in shifts to establish a safe staging area to evacuate civilians from the city. Additionally orders were received from Argent High Command - they’re to remain in place and assist the city and surrounding areas as able.

Kuepa Ridgemane suffered several injuries but thankfully was swiftly seen to by healers within the Barracks, where the defenders had established a refuge. During the defense it was noted that the ghouls seem to being directed, as they seemed to identify weaknesses in the defense, coordinate amongst themselves and then take advantage.

Ergot Part 3 - Cultist Comeuppance will take place this Sunday, November 22nd, at 8:00PM ST . We will be meeting up in Brackenwall Village, Dustwallow Marsh and utilizing the Conquest D20 system - guidance will be provided on how it works once we are all gathered and the IC briefing has taken place, if you are unfamiliar.

This event is open to the public and you do not have to have attended the last two Ergot events to take part in this one (or any Ergot events that may follow).

This is an investigative and combat event. Be there or be a stinky square!

Ergot is now concluded! Thank you Dieselle for helping me DM and for coming up with the tidbits of intel folks can use with their guilds and friends!

This campaign was actually the first time I ever DM’d by myself. Ergot Part 2 was the first time I’d ever DM’d combat, and 20 people showed up! We consistently had 10-12 people at least show up to these events, and for one of them we had almost 25 people. They weren’t all the same faces, either! We had folks who were new to me, people brought alts and developed them, and Captain Athelar learned that the Horde is a buncha murderhobos (nothing wrong with that, it can definitely be fun).

I tried to also use this as a chance to showcase other people in the community who wanted to take a shot at DMing! Krok’thar, Athelar and Dieselle, I think you all did really well (even though I sometimes dropped the ball, sorry ;_; ) and I really hope you guys decide to run events of your own in the future - hopefully public ones so I can hop on up in there!

Thank you all for coming to Ergot and we hope you all enjoy Shadowlands! We might have more things in the pipeline. >:D They’ll be posted here.

Are there any classes you do not take?

Friend requests sent. Need to talk to someone.

Both my officers and I haven’t received any friend requests on Discord! If you like, you can send me a request on B.net! My tag is: Mirchea#1510

The Argent Advance will be participating in [H-RP Event] For the Hungry! on the 22nd and we’ll be bringing arm-wrestling and delicious food!

We’ll be the dorks with the Argent banners. Can’t miss us.

For the Hungry was fun and a success! We also had a little holiday get-together for the guild and some friends the week prior, and next week we’ll be starting our first guild-only campaign, learning how to work together as a unit. We’ve had a good handful of new recruits joining us and I look forward to seeing what awesome contributions they can bring to our story.

We’re also looking into a simple D20 system that will make things fun and balanced but not leave new recruits in the dust of the more established folks over time. If anyone has any suggestions for that, we’re all ears!

Thanks for having me!

We’re happy to have you!

Goodness gracious it’s been a hot minute since we’ve updated this thread! The Advance have been busy bees, conducting training, participating in a siege, building an airship, generally being good ambassadors. How’s about a little update?

The Siege of Corin's Crossing

And currently we're working on our next campaign, Airship Assembly! Other Argents and friends of the guild are welcome to join us along this newest journey.
3 Likes
next page →