Please use this thread for feedback and bug reports regarding the changes to Torghast, Tower of the Damned.

TORGHAST, TOWER OF THE DAMNED

Thank you for helping test the changes!

The most recent changes are very, very good.

The Empowered Bar is now more like a “Special” meter than a “Streak” or “On Fire” bar and is filled by performing actions that earn score and no longer decays over time or with deaths.

This is a good move and removes some of the eSport factor from proposed Torghast changes. A timer would have doomed the feature for many, including myself.

The only problem I have with Torghast really, is the disparity of fun of different wings.

Upper reaches is cool, fast, very vast but allows to skip if you please, can be done in minutes or take long avoiding fair traps

Meanwhile others have the ghosts and revive, drop pools and move around all the time. Drain hp per attack and constantly spam AoE, unable to skip. Others with unfair traps without a consistent pattern (the fire vents that come in matrixes) or a lack of Mawrats that render many powers useless. Also, getting the "earn 25% phantasma 1 layer before the boss is the worst.

After that, it’s very fun. Upper reaches is my favorite, Coldheart can be annoying for the increased health pools but it’s okay. Really it’s about the fire traps and the disparity of fun in between wings

My Uncle is having issues with our guild perks on his alt they are not there in the general Tab in the spell book they are not there his Hearthstone still has a 30 min CD instead of the 15 min CD from guild perks We tried removing his character from guild and reinviting that didn’t work he logged off and back in still nothing. So I had him put in a ticket if anyone else has experienced this would like to know how to fix it for future reference. Thank you.
P.S. Hope all you GM Ladies and Gents are having a good day and the past year wasn’t total crap XD

The empowerment button has a 1s cast time that feels a bit off. I think it’d feel better if it had no cast time and was off the GCD. IMO with this being Torghast I want to see more focus on the fun! Just let us go ham when we pop CDs and empowerment and this week especially with unbridled darkness.
Also I suggest that with the loss of the 5th floor, the 4th floor of Torghast should always be one of the bigger or more dense floors. It feels awkward when I take a break on the 3rd floor, pick up some new powers etc., but only have one more floor to enjoy those powers before the boss (unless progressing into the Adamant Vaults). And when that floor is the trap hallway in the fracture chambers or the trap floor on upper reaches it’s a bit deflating.

Yeah, the cast time on activation was odd. It would be nice to be an instant cast, even if it animation locks your character for a second and does a neat spell effect.

The visual effects don’t make it clear if the buff is on (at least yet, not sure if more TK will help with that). So I’m tracking the buff icon more than anything…

A way to “disable” to conserve a percentage when it’s no longer needed would be nice. I understand timing now is a good skill layer, but the ability to tactically disable and save, say 35% of what would otherwise get burned may be a nice extra layer of interaction.

Partial soul ash is decent. It’s not incredible but it’s enough to actually sit and farm if you want to have a stockpile, or test out some other legendary powers. I really think that’s great.

The Box of Many Things needs some UI love, and some arranging. E.g. you get the boss damage reduction before the elite damage reduction, even though having boss power should be deeper in the tree (in my mind, it’s a greater reward). I still need more time to obtain and wrap my head around all the powers but they seem to be great this far. I loved Chrome Timewalking scenario and the perk table for Visions, and the Box feels very similar, so really enjoying that overall.

I don’t like the layer blocking by completion rating, and feel it should just be blocked based on prior layer being completed at all. I understand why that system exists, but it’s more frustrating for me to be barred from entry than to enter and fail until I can solve it. It seems to try to prevent complaints of “this is too hard” but may instead get met with “this is ridiculous that I can’t even try to get the full reward”. Maybe meeting somewhere in the middle with warnings of danger plastered on the layer, if the prior layer wasn’t cleared at a suitable rating.

Overall, I really like the changes so far. Since I don’t have the time to gear in PTR, that’s likely the extent of testing I’ll be able to complete on PTR. Any plans for future PTR to bring back character templates?

When i see the maw its like poo that needs to be flushed away.

As someone who found that the first version of empowerment gave a sense of time pressure, I like the change especially as making it an extra action button adds some extra skill of when it’s used. I agree with previous comments the cast time is weird and I also have it a bit awkward with having two extra action buttons with unbridled darkness up at the moment. I definitely want the extra action to stay as it gives the buff an extra dimension.

On a different note I find the unstable phantasma torment extremely annoying and would prefer to create a bunch of orbs to collect as opposed to the rng add you have to kill quickly which often comes at bad times.

On a philosophical note, one of benefits of a scoring system is that you can create competition with people wanting to get the best score. Unfortunately you can’t do that well with your scoring system as their is a cap to how much score you can get. I don’t have answers to what you could change outside of creating a new version of torghast but I think you should look into it.

Finally while the score system and the box of many things helps torghast it doesn’t help the underlying problems with live torghast which is that you don’t ever feel very powerful and you can’t make many interesting or different builds. The powerful part is really a scaling problem which happened in beta where the first few floor were harder than the rest but i think it worked better than each level feel as hard as the previous or harder than the previous so your anima power don’t feel as useful. As for the builds problem you need make more anima power like 50% more and I personally think make the first anima cell and the ones from the empowered door guardians on each level be all epic options.

Shameless plug for two new Rogue powers; one to be invisible through elites that normally see through stealth, and two to pickpocket phantasma and anima and do a full stealth playthrough.

Thank you. No more getting hit for 180k fireballs and leaving the run because the floor is doomed after your first death and losing all your temp buffs.

This change is nice especially with the new bar being able to carry over into the next floor. I don’t have much to say because the experience interacting with it was pretty positive but the “more points from all actions” part is kind of weird.

Since I’m assuming that more effort = higher score I didn’t bother to 100% a floor because I’m expecting anything more than I did to also be a passing score.

That part is great, the minimum required is a lot better than the previous iteration I played so I think on average a greater number of “how did I fail this?” runs are going to be passing now. I think the lowest I passed with was a 71% completion.

For my test: I just killed enough to get the empowered bar and if I didn’t think that killing more would give me another bar, I moved onto the next floor. I also only broke things for as long as I was empowered with the exception of the souls on the vendor floor. 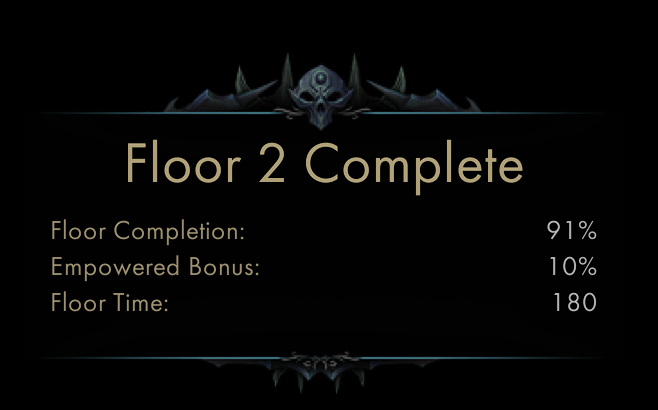 In a similar run where I would pull mobs + break urns at the same time and only use the empower buff to kill bosses I ended up with an identical empowered score despite not having broken urns or tried to free any souls while being empowered.

That run, floors looked closer to this 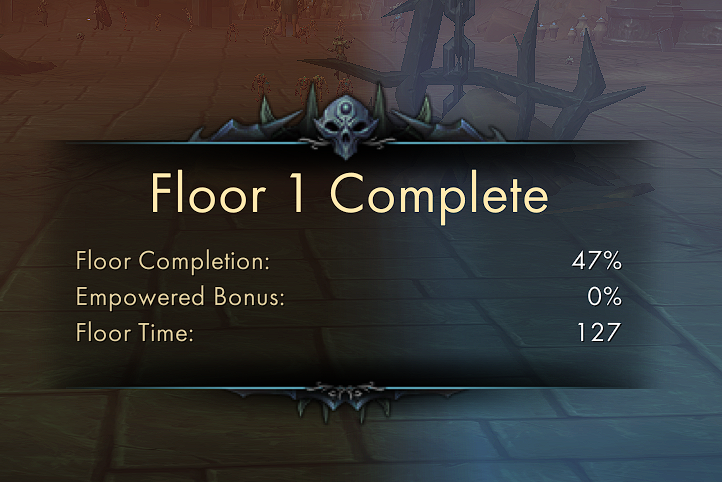 So I’m not quite sure what is going on with the 100% activity bonus. Are they bonuses added to overall completion instead of the empowered score?

The extra bonus scores at the end are also really cool. Was there a list of what all is available?

Not sure if there are any but it would be nice to see some class themed bonuses around builds or something like that. Like if you pick all of the blackout kick perks you get a +10 for some martial arts themed bonus or something.