The change for Outlaw that I would most like to see is to change Count the Odds to a 10/20% chance for 5/10 seconds and completely remove the added stealth bonus. This would give Audacity a good footing outside of Shadow Dance windows (or without taking Shadow Dance at all), and it would go a long ways towards not having Shadow Dance be too powerful (but still good!) and balancing the entire spec around one talent.

Improved Ambush is taking the position Deeper Stratagem was in. Nightstalker and Tight Spender are swapping positions and point costs as a result, with slightly adjusted values to accommodate.

This becomes a completely wasted talent point for me then as I do not use ambush EVER. Mutilate does more dmg (has a higher chance to crit) and gives more combo points when it crits than ambush does.

I appreciate that Cheat Death has been moved, but its placement as a choice node with Elusiveness creates the same issue we currently have with Row 4 in live: Cheat Death is the stronger, default choice in almost every scenario, which is why it is unanimously chosen by rogues over Elusiveness. If you want to delete Elusiveness from the talent tree, just do so, because putting it in competition with Cheat Death is essentially the same thing.

I have never had an issue where elusiveness in pve was the worse option over cheat death. I personally wouljd love to have both options especially in pvp.

As far as slice and dice goes, I would like to vote to have it just removed from the game. It feels bad to use and it’s a worthless maintenance buff. In lieu of cut to the chase for assassination, put in a talent point for Preparation Preparation

Or barring that, how about bringing back Deadly Brew?

Also, can we just make Thick as Thieves baseline with trix again? Can we also make smokebomb baseline as well as dismantle?

I literally just got into the beta. I primarily do casual PVP nowadays, but I have been playing the class since 2008. I also mostly play Assassination and Outlaw (every so often). So I’ll be commenting on these specifications. Updated 09/22/22

I have never had an issue where elusiveness in pve was the worse option over cheat death. I personally wouljd love to have both options especially in pvp.

My point here is Cheat Death is very, very powerful in high end PvE content. Elusiveness is also strong, but does not compare and requires more active, conscious use. In order to make Elusiveness more appealing of a choice, I think it needs to be stronger. (It’s baseline 40% AoE damage DR in live, maybe make the node an overall 40% DR?) Otherwise the same numbers may persist through DF. I want to have incentive to choose Elusiveness more often over Cheat, rather than just have a default talent row that I never swap out of, so I do hope to see it buffed a bit if it’s now in direct competition (again) with Cheat.

Not very surprising to be honest and it’s hard to argue with facts and statistics. But I think Elusiveness has a place in pvp, m+ and raiding, you just have to have the courage to run it over Cheat Death. And honestly, Cheat Death is useless on some fights, particularly “rot dmg” fights, where you constantly tick down and if you proc cheat, you’re likely dead anyway. A good example of this is Mythic Nzoth, where cheat was basically useless and lots of ppl played Leeching Poison (because assassination was meta).

This doesn’t happen often enough, the power difference between Cheat and Elusiveness is not 99%. But I do agree that the Elusiveness talent can probably go back to being 30% now that you can’t have both.

Last we spoke, we talked about some upcoming changes to the Rogue class tree, and one of the immediate and echoed points of feedback was comparison and concern regarding pathing and connectivity for the class tree as presented and also for current spec trees.

While the Rogue trees are not and will not be exactly like those of any one other class, we’d like to share how your feedback has helped continue to shape the Rogue trees up to current. We’ve added connections we believe help create more flexibility and creative opportunity within the trees, while avoiding undermining the intended costing of deeper tree sections. Please keep in mind that: 1) Changes happen iteratively, which means some of what you see will be present in this week’s PTR and Beta builds, while other changes will not be in a public build until next week, and 2) As always, anything and everything is subject to change - it is Beta, after all.

Okay, with that preamble out of the way, let’s take a look at the current structure of each Rogue tree: 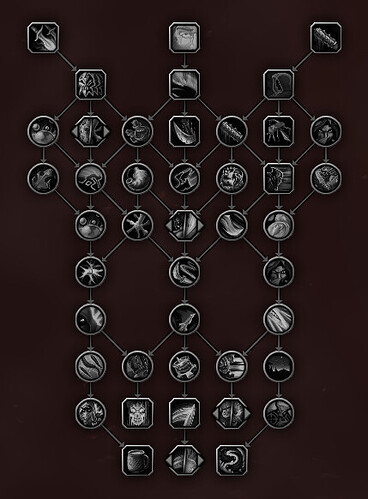 Beyond the pathing changes and connections seen above, there are a few details I’d like to note: 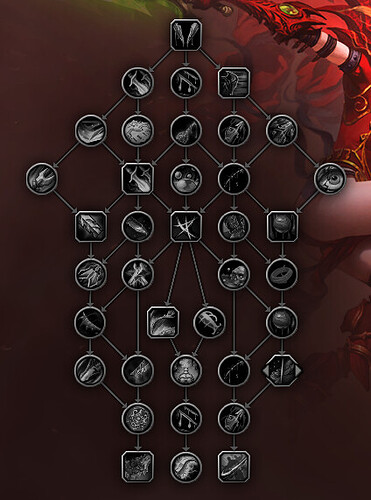 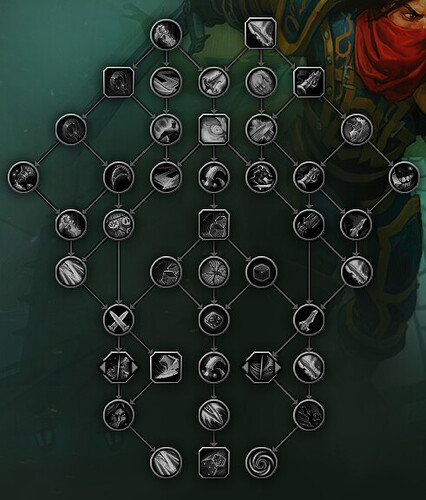 Outlaw has quite a few connections created in the top and side portions of the tree. As an individual talent change, Heavy Hitter (previously NYI) design has changed, now granting 10% increased damage to all abilities that generate combo points. 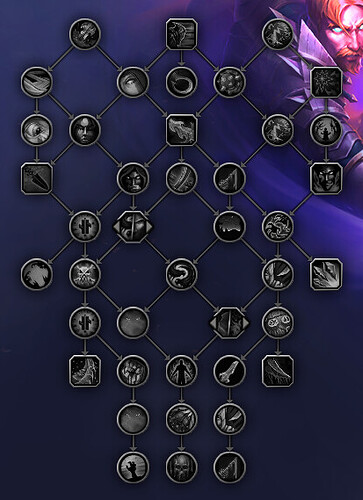 Subtlety has seen perhaps the most significant total change to its talent tree structure (as displayed) and its individual talents.

Alongside the previous post’s Danse Macabre, we hope the total changes to the Subtlety tree (and other Rogue trees) will provide more flexible talent options, meaningful choices, and fun gameplay opportunities.

Thank you for your continued feedback. We look forward to hearing about more of your experiences on the PTR and Beta, especially across the next two week’s builds as more and more Rogue talents get fully implemented. Cheers.

I hope when designing the talent tree button bloat is also considered to the decision making and feedback implementation and compromising in terms of design goals. But anyways keep up with the news and iteration and feedback and stuff like that and especially the hard work that goes into these things.

For the Heavy Hitter change, does that mean it will no longer do the super charged combo point?

If so, I think that is just an awful, awful change. Before, it was the coolest talent for the entire class. Now it’s just a very boring passive.

big agree. also a bit concerned about thistle tea and mastery seeing that mastery is so bad for outlaw relative to sub and sin. feel like itd be much better if it gave crit to match the crit theme of the left side

At first glance the new Subtlety tree looks really damn good I am really excited to play around with it in the talent calculator, really awesome pathing choices while still retaining the 3 main package choices.

As for the class tree, the extra pathing choices in the top half of the tree are welcome. I know that there will still be the angry people who wish to see their tree as a spider web but I myself do not share this sentiment. My first impressions of the Shadow Dance changes are good, now Subtlety truly has a better Shadow Dance.

Thank you again for the correspondence, can’t wait to get my hands on these new trees. Cheers.

Great changes, way more than expected. The subtlety tree looks so much better in pathing and choices you can make. Can’t wait to play around with it on beta. Will sleep on it and post something more indepth tomorrow.

Just to elaborate more on my thoughts for the Heavy Hitter change. All of this is from my perspective, so others may disagree.

Echoing Reprimand was the best Covenant ability out of all the classes in terms of how it fits with the game play of that class. The little mini-game of using the supercharged combo points is great. It added a fun gameplay mechanic and added a new way for us to use our builders and spenders. One of my biggest let downs during Shadowlands was that it was never the best one for the content I was playing.

My one wish for the Dragonflight trees after we saw that Covenant abilities could make it was that Echoing Reprimand would be in there somewhere and you fulfilled that wish.

Then I saw the Heavy Hitter talent and gameplay style it was going for and thought it was amazing! I really liked the direction that was being thought about - adding the superchaged combo point into the specs outside of the Covenant ability. Making that mini-game just a part of rogue and its gameplay style would be really cool from my perspective. And I really wanted to see that sort of interaction in the other specs.

But now that has been removed and I am lead to believe that you all are no longer exploring that possibility and that makes me a little sad. It was something that would have made rogues a bit more unique when compared to other combo point-esque specs.

If we could at least hear the reasoning behind removing this, that would be appreciated.

But now that has been removed and I am lead to believe that you all are no longer exploring that possibility and that makes me a little sad.

ER and Resounding Clarity is literally in the class tree if you want to play with it.

But Heavy Hitter is similar to ER + RC? You get a bunch of anima cps, am i missing something.

The change above mentions changing it to just grant 10% increase damage to all abilities that generate combo points.

Yea but what i meant is that you can get that combo point gameplay from the class tree, quite easily too.

Not sure if that’s what you meant, but sure. Echoing Reprimand is there. But what I am talking about is a bit more than that. With Heavy Hitter, they were exploring baking that supercharged mini-game into the specs themselves. With that change, they are removing that.