Please use this thread for feedback and bug reports regarding this encounter, or related issues. Noting the nature of your group (Mythic guild premade, PUG, etc.) is helpful, as are any logs. Thank you to everyone who has come out to help test!

[Threat Neutralization] on [Guardian of the First Ones] boss does nearly oneshot damage to ilvl 200 characters (which is everyone scaled to). This coupled with Sentry Fire AOE guarantees you are dead if you are targeted by it.

Fatescribe Roh-Kalo biggest issue is the RNG of the destination of the runes. If you are lucky and you have people who know exactly what to do with them, you still get a bad rune position in the final phase (less than 40%) on the outer ring. We had the boss almost dead after completing the two intermissions perfectly and then the outer ring put the destination on the opposite side of the rune which required the ring to rotate close to 270 degrees. Since there was no counter rotation, the 270 degree requirement was too far to get the ring and we wiped.

I think #2 would be best for LFR or #1 but if all else fails you can turn the boss into a spectator boss with #3.

We came in with 10 stacks of determination and left after another 10 wipes.

Fatescribe Roh-Kalo is harder in LFR than most bosses on Heroic. I’ve already managed 40+ attempts with half of them at 10 Stacks of Determination and the Runes cause 95% of wipes.

You removed the ability to rotate the rings counterclockwise which actually makes the fight harder. If 2 people stand in the rune, the ring just stops completely. Because you can only go clockwise, it makes it near impossible to rotate a ring >300 degrees in the intermission stages within the 40s allowed without 100% uptime and standing on it the instant it can be moved, which is hard because the boss knocks everyone out of his ring and the rune’s starting location can be on the opposite side of the arena.

Phase 3 is not possible if rune spawn RNG is not in your favor with only clockwise movement and only 30 seconds as seen by this mage with the purple marker: 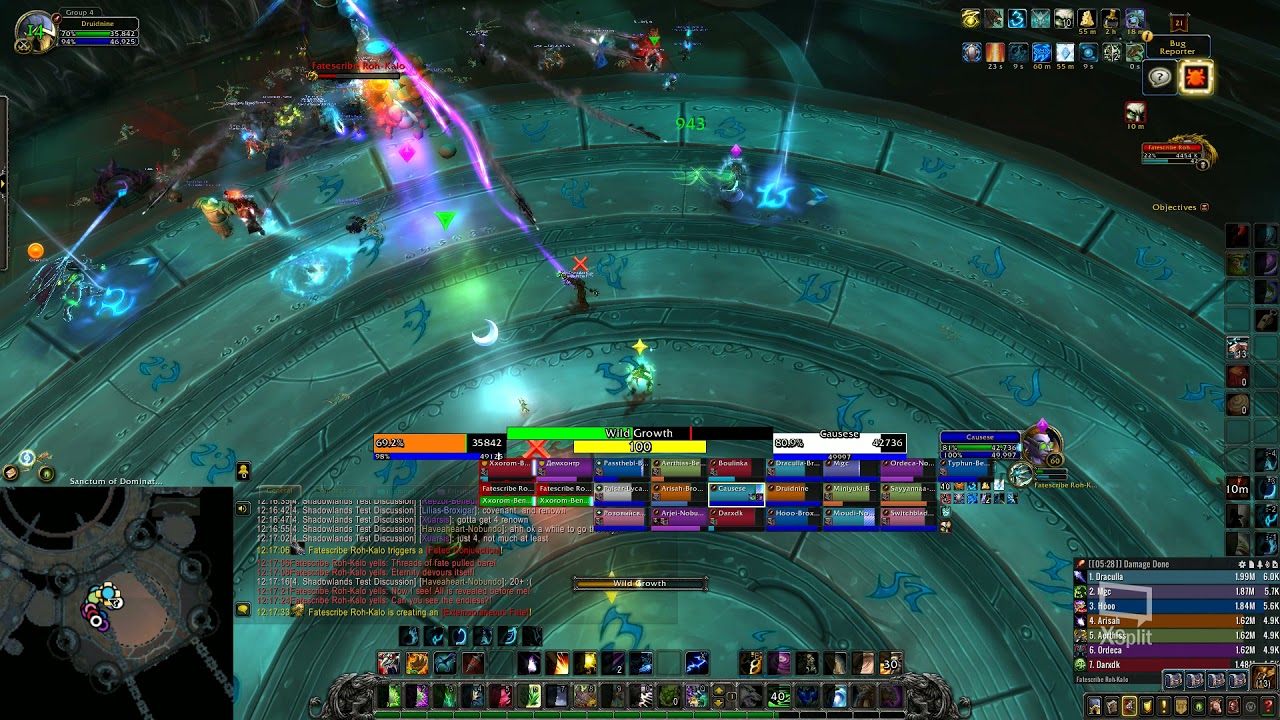 For LFR:
Make any amount of players in a rune rotate it clockwise (so 2 people in one doesn’t jam it to a halt)
Make each missed rune do 50% raid damage so 1 missed rune doesn’t cause the raid to wipe
Increase the time allowed in Phase 3 or control the starting position better.

Please hotfix Darkest Destiny damage for the rest of the weekend so it doesn’t instant wipe the raid every attempt and so we can move on to test Kel’Thuzad too. This boss is a worse LFR killer than Painsmith Raznal was last weekend.