i would love to be able to use intimidation and explosive trap at the same time, because the way it is now i have to choose between one of the two and that’s too bad, in pvp situations explosive trap is a lot of fun, it allows us to play enemies from cliffs, taking a melee away from us etc… the way it is now I would have to choose intimidation most of the time giving up the fun that explosive trap gives players, , another suggestion is to come back with aspect of the wild the way it was before, now it became an area skill being useful only for pve but we already have beast cleave, the way it was before I could use it in any content because it was a burst, it combo aspect of the wild with beast cleave and the damage was very good, now with aspect of the wild it is no longer a burst the general damage of beast mastery will decrease a lot and I say this as a casual player

I’ve been playing for 2 weeks and the Call Pet menu hasn’t worked the entire time. It’s a basic function.

If I’m in Camouflage and I summon my pet, my pet is not stealthed.

I do not like current aspect of the wild too. But in no way I want the old one back. Faster GCD, 10% crit and some focus is not what I call a burst or a CD

They should fix Call of the Wild to make all normal pet thing work with them and not just auto attack. THIS is what I call a burst CD (cause it’s basically old stampede from MoP and that was really good).

well, the aspect of the wild is not really a skill that will directly increase the damage of skills, for that we have bestial wrath, however, a 10% increase in critical damage impacts the overall damage increase of the spec, but really it’s not something that makes much difference, but as the aspect of the wild now also hits a nearby enemy I’m afraid of the double shot hitting a pack that I don’t want to agro or an enemy that is in an ice trap, but apart from that the skill It’s not all bad… now if they put Intimidetion and Explosive Trap separately it would be very good

When I think it’s bad for people who can not test anything right because the talents are always bug, I think for the devs is much worse because only has 2 and a half months to deliver an expansion without real tests ! Good luck you’re going to need it!

Survival Bugs - Latent Poison does not trigger from Mongoose Bite.
When not specced into Wildfire Infusion, Bomb is still using the "Shrapenel Bomb effect at times.

Also I must say, as Dillon said earlier. Survival feels like a spec that revolves around a 1 sec GCD. Would feel alot more fluid if it was just made baseline.

Edit - One more thing that I’m going to shamelessly and selfishly propose. Wildfire Infusion baseline, its one of the coolest talents for Survival and really upgrades gameplay, plus its my favorite!

If you don’t want to make Lone Wolf baseline, please just do this instead of the change that was made in the most recent build. 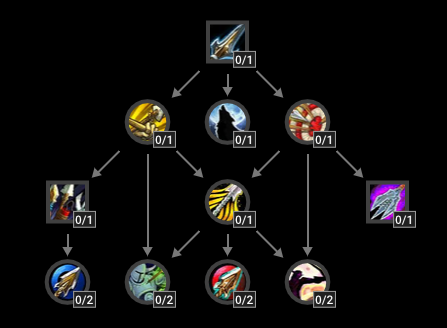 If the concern is that Improved Steady Shot needs to be earlier in the tree for leveling purposes, boy do I have a suggestion for you - make the Focus gain a part of the baseline ability! It would not break the other specs in any way.

Or just make the focus gain a lvl 10 passive for MM.

I’m super confused on why LW is still a node. Titan’s Grip went baseline, LW really needs to do the same.

We wanted to discuss some changes coming in a build next week.

Do you and your team see any further iteration coming to Survival’s tree or do you feel that is in its final state?

Additionally, do you and your team see the current Sentinel’s Wisdom (party leech and Magic DR) as the answer to the request for more group/raid buffs or is that conversation still happening!

New 1-point Talent: Entrapment. When your Tar Trap is activated, all enemies in the Tar Trap’s area are rooted for 4 sec. This root can break from taking damage, and is magic dispellable.

This is awesome, does it mean Steel Trap is going to be changed by chance?

Nesingwary’s Trapping Apparatus has been removed.

Thank you, hopefully Binding Shackles is next.

Certainly an improvement over the previous implementation. Really hope there’s still some consideration for raid-wide utility that hunters are severely lacking. Sentinel’s Wisdom & Sentinel’s Perception will be fantastic in dungeons and PvP, but hunters still need a form of raid utility like nearly every other class has (the exceptions being shamans and death knights, but that depends on how you view Death Grip & Gorefiend’s as raid utility).

Took a few years but this is wonderful news.

And now Hunters come along to take something that should be (Shadow) Priest’s. And next we hear “There are too many leech buffs in the game, so we aren’t going to be giving one to Shadow or Priests”.

Gonna be great when I see Hunters healing more than Shadow.

Sentinel Owl and the choice node below it have moved up 1 row.

Thanks for the new changes! NTA being removed is great. I just want to point out that while the changes to Sentinel Owl are a small step in the right direction, it doesn’t move hunters any closer to having that powerful raid buff/utility that will get us in raids over other classes.

We need something in addition to Sentinel. Could you let us know if your team considers sentinel to be the only raid utility we’ll be getting or should the community be holding our breath for something else that has more oomph?

I’d like to see Aspect of the Fox buffed to last longer, but nerfed with a sated-like debuff so it can’t be stacked.

Alright, I’m sorry, but this is ridiculous. Shadow Priests have been begging for some sort of group leech effect as an entirely thematic way to differentiate from healing Priest utility. Seeing this change after the latest Priest blue post just comes across at best as a poorly timed joke.

Ma’am this is a hunter thread.

Yeah mate, couldn’t agree with you more. When I think of what priests need, it’s more group utility! The following list is definitely too short:

Do you want me to get into the spec specific spells too?

I’m glad hunters got cool stuff, every class should get cool stuff. But this comes 2 days after priests get a post saying we can’t have a spell that we have had for several expansions that they then give to other classes.

People are understandably upset but shouldn’t try and point the finger at hunters. This is a Dev issue and should be directed at them and priests shouldn’t be giving their feedback here.

Why do people always seem to like comparing classes when they should be treated as stand alone things?

Any plans to change how Leech works for BM hunters? Just a small % of our pet’s leech counting as ours would go a long way,