Worked for me. Make a completely new character for both a 70 and start the leveling process again with a fresh new character.

I’ve made multiple so far with dragon riding skills now.

If possible I would like to maintain momentum when manually dismounting from Dragonriding mounts. This is how it works with normal flying mounts and it is super jarring to be going at super fast speed with a dismount and suddenly be falling straight down instead of toward the the direction I was going.

The “forced dismount” that happens in some areas, like the end of the dragonriding dungeon, is super janky and unclear. No idea where the boundaries are, and the momentum bounce is extremely jank and awkward. I would expect more naturalistic wind physics and effects that prevent your dragon from proceeding organically if barriers are needed.

Adding onto my post from before, I think there could be a “Slow” ability of some kind to maybe cut the acceleration down by forcing wing flap animations. It can sometimes be very difficult to land in some spots with precision. I saw in the game files there’s an icon for an ability called “prepare for landing”. I don’t recall seeing this ability in the dragonriding talents so I’m not sure if this is just something not implemented yet or otherwise a hidden passive spell icon for the action the dragon does when reaching < ~10% speed.

Also, I might consider placing the dragonriding spellbook abilities somewhere maybe better organized outside of the general tab of the spellbook. I can imagine later on it may start to get cluttered and at a certain point I think there’s going to be more abilities labelled dragonriding than not.

but it feels too expensive

why not have it at x2 vigor?

surge forward still feels like it should give a bit more speed than it does.

i absolutely love this feature and am flummoxed by it as well sometimes.

sometimes i double space and my dragon launches SO HIGH into the sky. other times i do so and barely make it 20 yards off the ground. when the latter happens, i’m often stuck trying to gain power so that i can launch again and actually get somewhere.

i love the vertical nature of the zones but i can see how players who aren’t as good getting supremely frustrated with getting stuck somewhere in the zone with no path to where they need to be because a lot of the expansion revolves around this feature.

Hello Dragonriders! With today’s update to the alpha, we’ve made a few changes that deserve their own callouts.

We discovered early in Alpha that we’d need a solution for players who rely on /follow or similar features to engage with World of Warcraft, as following wasn’t immediately compatible with Dragonriding. To address this, we’ve added “Ride Along”. Dragonriders can speak with Lithragosa (the Dragonriding Trainer) to opt into this new functionality. With Ride Along on, a player in your party may interact with your Dragon Isle Drake to transform into a whelp that will follow alongside your drake. If you are someone who has relied on /follow or have other players help guide you around Azeroth (or find Ride Along to be an interesting accessibility option for other reasons), please try this feature out and share your feedback with us!

Thank you all for your continued feedback and discussion.

This is an awesome change. I tend to afk a lot, so I’ll already miss being able to auto-fly somewhere for 30seconds or so, en route to a destination a ways away, so I’m thankful that I can still afk when needed while playing with friends. I hope this helps a lot of people who really rely on it to play the game with visual impairments, as well as others who just like to use it.

After doing some flyarounds across the isles, I have to say I’m rather mixed on this change. I get the intent, in theory it does make it less sluggish and more enjoyable to maneuver, but in practice, it feels much more like a regular mount with fake gravity and no real weight to it.

I think a middle ground between last week’s version and this week’s iteration would probably be ideal, since I do think making it more maneuverable is nice, but how it is right now just feels unnatural and unlike the intended fantasy of a big winged dragon mount.

Here’s some examples of the rather jerky and unnatural feeling animations (twitter is my best video upload place lol): https://twitter.com/Portergauge/status/1562636739654471681

Tested out the new dismount from whirling surge. It doesnt dismount but it does force them to the ground.

However at 3 vigor I think whirling surge is still too impractical to actually use. I think it needs to be at 2 vigor.

. To address this, we’ve added “Ride Along”. Dragonriders can speak with Lithragosa (the Dragonriding Trainer) to opt into this new functionality. With Ride Along on, a player in your party may interact with your Dragon Isle Drake to transform into a whelp that will follow alongside your drake.

This is awesome, thank you! Will it also work in The Nokhud Offensive dungeon where you need to use Dragonriding to get around?

This is awesome, thank you! Will it also work in The Nokhud Offensive dungeon where you need to use Dragonriding to get around?

Thank you for asking! We currently plan for Ride Along to function in The Nokhud Offensive.

Can we have clearer explanation for Whirldwind surge dodging wingshredders ?
Maybe just reset stacks/give immunity from stacks for the next 5 seconds when used ?

However at 3 vigor I think whirling surge is still too impractical to actually use. I think it needs to be at 2 vigor.

I feel like at max speed it just doesn’t really give enough “umpfh” for the price, but at max glyphs 3 vigor is pretty much free.
Maybe make whirlwind surge grant like 2000% movespeed for the 2-3 seconds it is applied ?

(This only occured with Reduced Camera Motion disabled.)

I have this same feeling with surge forward as well. I kinda laugh sometimes when I use it since it seems like it gives almost no speed increase

I think max speed from gliding could be reduced slightly, with diving, surge forward, and whirling surge giving speeds higher than what could be achieved with gliding alone.

Alternatively they make diving and whirling surge give a speed bonus beyond what the max speed currently is. Diving straight down should feel like the fastest thing you could possibly do but it doesn’t right now.

Hello, after using dragon riding for some time I have some feedback regarding the spell effect of reaching max speed. I tend to get eye strain while using the computer for a long time and I have found that dragon riding can become a bit irritating on my eyes. I think while in the beginning it wasn’t too noticeable since it was novel, in the long run I think this will be an issue.

I would really prefer it if the spell effect stayed below this red line on this screenshot I took. While it isn’t totally clear, there is a large portion of the spell effect above this red line that is pretty taxing on my eyes. With the glow and wind effects on the dragon and under the wings, itll be clear when you are at max speed. I don’t need an entire screen effect to tell me that.

Is there any way we can get a toggle for reducing the max speed spell effect? I kinda want an area of my screen to be clear from any effects.

You should be able to reduce the spell effects in the options menu under (someone correct me if I’m wrong) accessibility and motion sickness settings.

nothing in there that I could find to eliminate the full screen wind spam. I know dragon riding is inspired by the guild wars 2 system but it doesnt mean we need to take the griffon spell effect and crank it x10 to the point where its obnoxious. I think any spell effect should be kinda limited to the dragons body, wings, and maybe a slight wind trail. 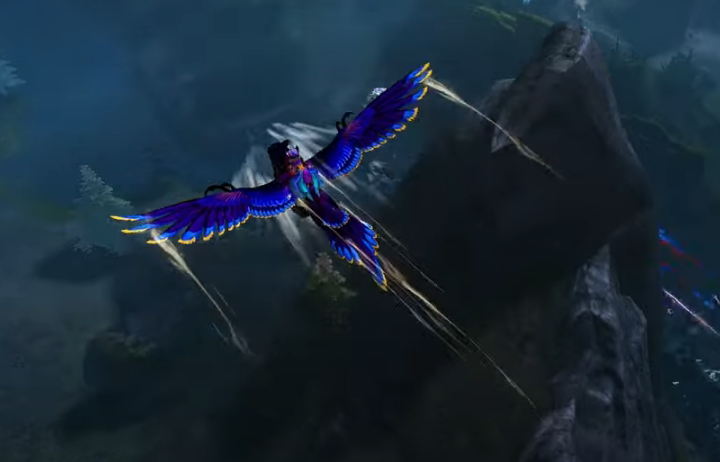 The issue I think comes with too much of the spell effect being in your peripheral vision. It needs to be toned down.