Emblems of Heroism from Sons of Hodir dailies is somehow okay?

That’s not the issue. A big anti-LFDer argument is that they would have to be “forced” to use LFD to keep up with the other people due to the ability to farm extra badges etc. This change forces people to do dailies to keep up with the gearing meta since these badges would otherwise be left on the table.

This was my idea. I told Blizzard they should added Badges of Justice to dailies because the gear grind in TBC is poop. Glad Blizzard is listening to some fans.

I don’t like this change, or removing RDF. #stupidchanges

Here is a video on it. 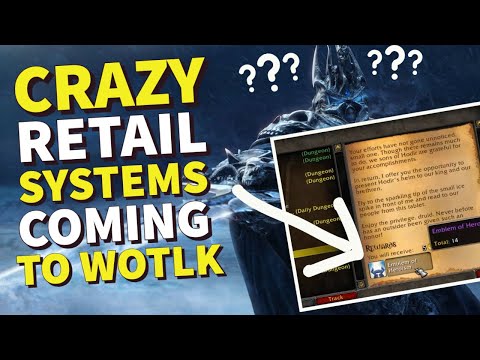 Gonna chime in here and give my two cents on the removing LFG system from Wrath. It’s going to be absolute bollox on my server. We boast a population of maybe, MAYBE 70 people and 4k horde. Thus we become a medium pop server without the medium pop. With the removal of this system it’s going to be useless to even try to do anything in regards to Wrath. I already had to scratch, claw and fight my way to the gear I currently have through PvP and PvP only. There are no Heroics on my server, you can barely get normals running and it takes severe coordination to get those off the ground.

If this daily system goes in, it will help, slightly. We’re still holding out hope that the server merges will fix a lot of our issues but in truth it’s just going to fix our Hordes numbers even more while pissing on us. I mean, with the change on PvP servers and being able to have Alliance AND Horde on the same account why stick around for a dead community when you can just roll Horde and not even have to spend for another sub?

I wanted to chime in and talk a bit about the intent of Emblems coming from certain quests in Wrath of the Lich King Classic. I’ll be the first to admit that we definitely should have been a bit more clear about why this change was made and what the full intent was (and what part of it wasn’t intended). It definitely deserved more than a single line in the build notes and I apologize for that.

Regarding the change itself, it might help to talk a bit about an interesting piece of technology introduced in Wrath of the Lich King called “Phasing”. Phasing is awesome storytelling tech that we added in 2008 as a way to allow the world to change around players during key storyline moments and is a great way to make the world feel more alive by allowing your actions as a player to have impact on your surroundings. One unfortunate by-product of phasing however is that it often times places players in situations where two friends grouping together are placed in different phases due to being on different steps of key quest chains.

As a relatively low-risk method to incentivize players to complete key storylines within each zone and get into the same end-stage phases with each other, we decided to add Emblems of Heroism and other bonus rewards to quests that put players into different phases. The idea being that if you had a reason to finish off zone storylines rather than moving on to the next zone with quests unfinished, you are more likely to end up in the same phase as any of your friends who ideally also went ahead and finished all of the key quest chains in each zone. We didn’t want to force players into the same phase in a jarring way, and this seemed like a very simple and low-impact way to both incentivize completion of zones, and give players slight headstart on endgame but putting a few extra Emblems in their pocket as they are leveling up.

This was not, however, meant to be a permanent, farmable supplement or replacement for Heroic dungeons or similar content. This change was applied globally to certain types of quests (mostly elite quests or other quests that place players into new phases), and as a result we likely caught a few quests such as repeatable or daily quests that we did not intend to be impacted by this change. We are going to review the affected quests and more adjustments are very likely coming in future beta builds.

This is a beta, and sometimes some unfinished ideas or incorrect implementation sneaks out. We definitely apologize if this caused confusion, and thank you to those that pointed issues with this implementation out to us.

Hopefully this post helps provide some context for this particular adjustment, and what we are trying to accomplish. Ultimately, the spirit of this change points directly back to our pillar of “Nurture and Protect Social Experiences”. There’s not much that feels more damaging to the social aspect of WoW than trying to group with a friend, and effectively being unable to interact with each other because you are in different phases due to different story progress.

As always, please let us know what you think as time goes by and adjustments continue to be made here.

ange, as this REMOVES PEOPLE FROM DUNGEON GROUPS AND THE COMMUNITY. Why run dungeons / raids when I can just SOLO DAILIES for badges???

Why raid when you’re just going to swipe your card and join a GDKP? That’s what this game has devolved into for half the “player base”.

Solid explanation, and a great way to incentivize quest completion.

Any headway on removing gold from the game so we can get rid of bots/gold sellers/GDKPs and return the game to actual players?

Just put RDF back in and stop ruining the game. You guys are literally ruining wrath. Just go in with no changes. Its like you all are doing it on purpose to ruin your game

You still have to raid to get raid gear lmfao.

Add race changes why wont you take my money

Now you see where i’m coming from

I feel this change really hurts inscriptionists. We will now have to grind a faction that we gain nothing from to get these badges.

Emblems of Heroism are used to purchase ilvl 200 epics, the same ilvl as 10 man naxx and heroic 5-man gear. That being said it’s not on repeatable quests so this should have almost no impact on heroic grinding in phase 1. I’m guessing at most it could get you 1 extra piece of gear.

Sons of Hodir give the wrath version of shoulder enchants. Inscription has a better self only version that gives them a similar but inferior amount of stats to professions like JC or blacksmithing. Being able to skip this rep grind was the one bonus to going inscription.