Is this true? Seen Soul’s YouTube video on the changes in DF Beta to ilvl crafted gear to be well below raid and m+ gear. I thought crafted gear in DF would match or be very close to gear ilvl drops from raids and dungeons?

I was so excited and pumped for months up until now, geez I’ve even leveled alts to jump into DF professions and the gear isn’t for me and I could care less about the gold, I’m in it to provide support to the 3 pillars of end game as I have no plans to dedicate my time to raiding or m+, my jam and my end game will be solely professions. I want to be competitive among my fellow crafters, to do work orders and be part of the community. What’s the point now? Blizz is going back to irrelevant crafted gear within weeks of the xpac release? 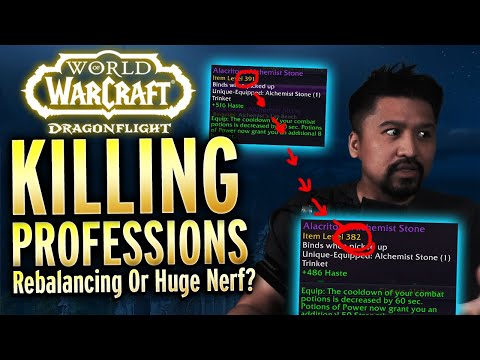 This is why I say, and I will keep saying, DO NOT PRE-ORDER THE EXPANSION.

Everything can and will be changed/nerfed etc. Any fun detected, will be removed before launch.

I agree things will change especially in Beta. If this true and perhaps further context is needed – if crafted gear is well below boss drops then why all the massive changes to professions, dev interviews and hype?

I sure hope there’s way more to this we’re not yet aware of because this will be a big downer, at least for me and other players I know doing the same thing as me, professions as the 4th pillar of end game.

So if I understood the video correctly we are talking about a difference of crafted gear maxing out 418 and the mythic raid ranging from 424 thru 434 (for the final boss). So that sounds like it would put crafted gear some where in the heroic raid tier level. Unless they are forcing you into raids to build these “upgrade” items, that seems pretty good to me.

According to the video yes but we crafters in general and I’m not speaking for everyone, were given the impression from Devs we could craft mythic quality gear and I hope we still can in later Beta builds or whatnot.

If it turns out we can only craft up to herioc ilvl gear when the game is live, it would be a shame of investing hours of our time to be competitive and have our crafting name out there when our hard work is tossed aside.

Crafted gear that gets tossed aside within weeks into an xpac and new seasons doesn’t feel good and has been a thorn in my side for a long time. The thought of crafters investing their time to support others is my jam. Why should full time high end raiders, pvpers and m+ers have to stress about DF crafting professions if they don’t have too and leave it to us world content professional crafting pros who dedicate their time to this function ingame.

The thought of high ilvl crafted gear tickles me because I want to help support players in all areas of game play, including normal and heroic gearing of course but don’t stop there, I want access to craft higher ilvl too.

Three Ranks of Infusions? Can we get another crafting blog? Dragonflight Beta Test

Community is starting to get worried Blizzard is doing a rug-pull. The Mythic Infusion items just got nerfed to below the highest heroic ilvl even though the tooltip still describes the gear as “Mythically Powerful”. My hope, or cope, is that Blizzard is simply shifting things around and next beta build we will see the actual Mythic Infusion added that will end up with a cap of Mythic Ilvl +4… not true BIS, but close enough that we can all mostly get over it. Otherwise, I don’t even understand…

still a cheap move to bait and switch like this.

maybe theres something were missing. idk.

maybe theres something were missing. idk.

There is something you’re missing. It’s in the thread I linked. There’s literally a wowhead article about it now.

According to the video yes but we crafters in general and I’m not speaking for everyone, were given the impression from Devs we could craft mythic quality gear and I hope we still can in later Beta builds or whatnot.

I understand where you’re coming from. Devs then shouldn’t have said in multiple interviews crafters can craft mythic quality gear. I don’t want to get ahead of myself and continue to speculate since it’s still Beta.

Can’t tell if this is a joke about Blizzard trying to do a rug-pull or what, but Blizzard literally just confirmed we’ll be able to craft Mythic ilvl gear. And you’ll be able to wear literally full Mythic ilvl gear from crafted gear, although only two pieces of embellished gear (uber-cracked Gavel-type stuff). One of the embellished pieces literally resets all of your CDs when you kill a dungeon boss, so, y’know, that’s PRETTY good for M+. And its mythic ilvl.

And its mythic ilvl.

Mythic what? Because there is a difference between mythic dungeons and mythic raids

They said that the gear crafted with a Concentrated Primal Focus, when it is crafted with with the highest quality materials, will be the same ilvl as loot that drops from the 2nd, 3rd, and 4th bosses of Mythic Vault of the Incarnate. If you don’t use the best mats but skimp out a bit, the item will instead be the same ilvl as the ilvl from the first boss of the raid on Mythic difficulty.

It’s in that thread my dude.

Why is Mythic raid loot in the first raid 424 anyway ?

DO NOT PRE-ORDER THE EXPANSION.

But then you miss out on Drakks.

Any fun detected, will be removed before launch.

I can’t remember when they made the decision but at some point it seemed like they felt that people couldn’t “feel” their upgrades enough, and then there’s the million difficulties thing so now we have these giant leaps in power between tiers to keep people on the treadmill if they don’t want to be weak.

It’s in that thread my dude.

I haven’t had time to read it yet. Just got home from work and grilling out dinner.

They’re reducing the ilvl of the Mythic Raid loot (as well as al ilvls from the sound of it)… which is what spawned this whole debacle in fact.

Dude, we had 124 ilvls between Ny’alotha Mythic and Nathria Mythic.

It was waaaaaaaaaayyyyyy too much. Like you can easily cut 30-40 ilvls out there.

You dinged at like ilvl 140 too, it’s not like it was to give Mythic raiders leveling upgrades.

They could simply make you ding at 290, give people who played S4 a little leg up on loot in pre-season. Mythic dungeons at like 320 and then never even reach 400 for Mythic Raid loot in S1. Like WoD did basically. I didn’t upgrade a single piece of gear leveling up in WoD from all my SoO Heroic 4/4 upgraded gear.

Yeah, smooth out the curve a bit. It’s just such massive leaps now and eventually requires squishes to avoid numbers getting too insane.

Legion started this whole craze. End of HFC Mythic was ilvl 740 IIRC, and then end of Mythic EN was a whooping 885 and you got ilvl 800s during leveling.

Like I wouldn’t even feel bad if my Mythic raid gear carried over right into M0s for slight upgrades.