A lot of players won’t consider it a battle pass, however Blizzard implemented a system that works like that during Legion/BFA.

It’s not a request to implement a new monetization system.

In the video game industry, a battle pass is a type of monetization approach that provides additional content for a game usually through a tiered system, rewarding the player with in-game items for playing the game and completing specific challenges. 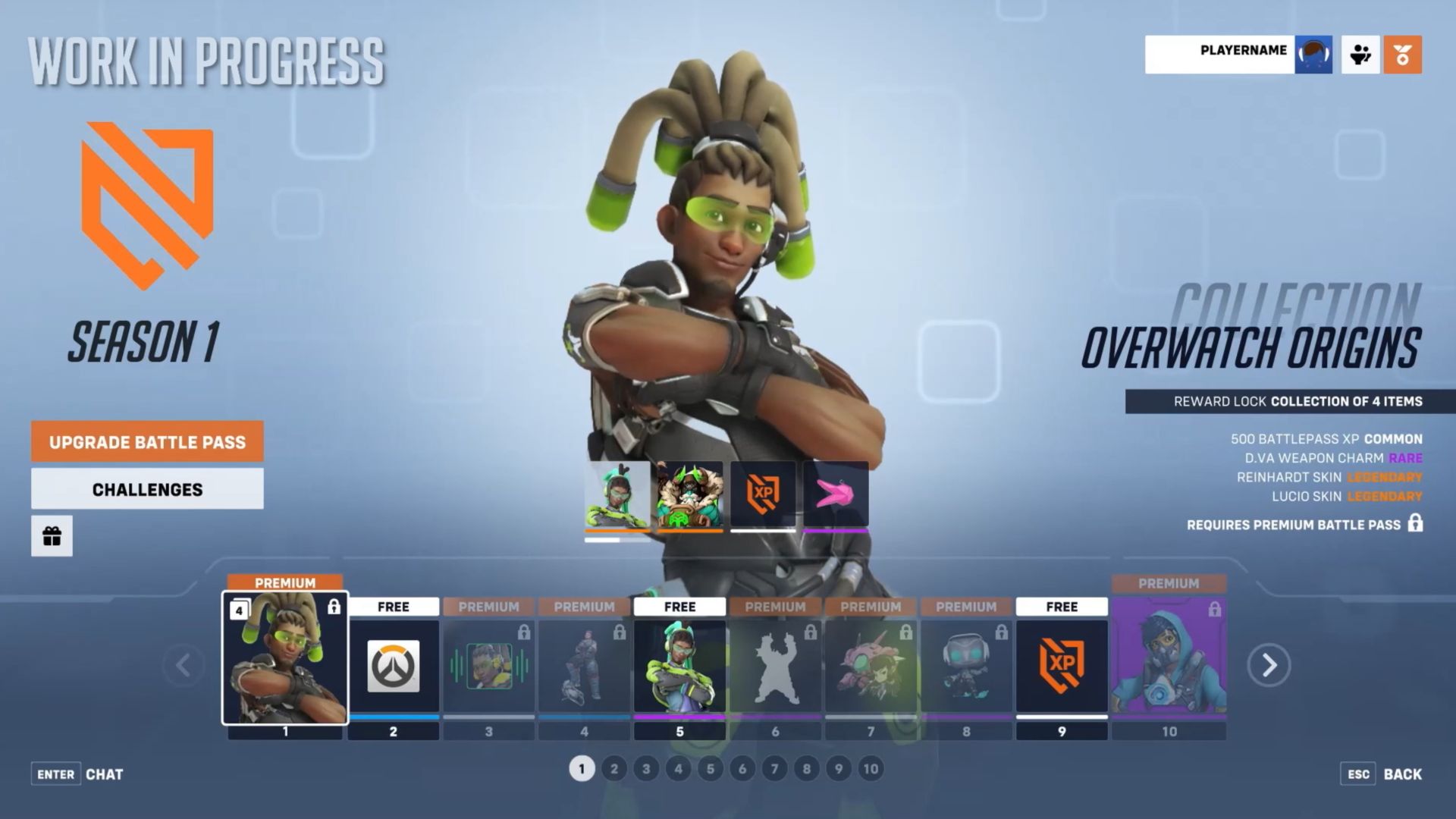 Similar to this kind of Battle pass, we’ve the forgotten:

This system works similar to a battle pass, get honor levels and progress for rewards. 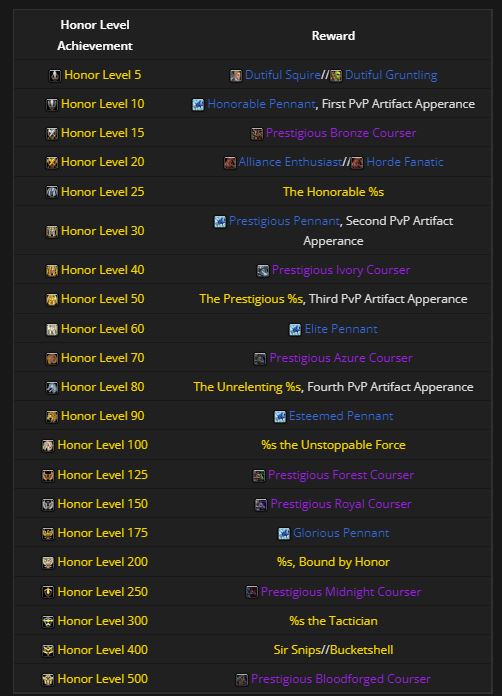 Right now this system is obsolete, compared to other games the rewards are split into some sort of exponencial goal, it starts with rewards every 5 lvls but later each 10-25-50-100.

IMO that’s a bad way to promote the system, it could have some rewards with unused mount colors, gold, unused pets…etc always keeping all the current rewards, adding rewards between previous progress and new progress in next expansions.

Besides the goals and rewards, progressing through the system and levels should be improved.

Almost all other games that have some sort of battle pass provides daily/weekly quest, right now WoW has few quest of that sytel for PVP (Even removing A New Deal for S4).

I’d suggest to include quest for attacking a base, defending a base, killing X amount of players on BGs/Open World/Arenas besides the current quest, similar to games like Fornite in order to avoid troll behaviour among the same team, some quest progress should be provided to the whole team or the players around the objective…

This is a casual participation system that any player could engage from different sources and it does’t required too much skill since honor could be earn from different activities.

Also, Devs should do something about Honor for Gear upgrades and Honor as EXP for this kind of system, maybe Blizzard doesn’t want to provide huge amount of honors or new ways to earn this progress due to the attachement to player power.

This a great evergreen system, since it’s not related to seasonal content, please improve it.

Right now, I just do some BGs casually and spam Arathi Comp Stomp Brawl for honor but it’s not good gameplay, I’ll do more BGs if there’s some objetives similar to other games with specific dailies.

Overwatch is dedicated pvp game with pve as a minigame.

Wow is dedicated pve game with pvp as a minigame.

Hard Pass on anything battle-pass related

I ain’t gunna read the nonsense

Good grief, I read the title as “Pet Battle Pass” and was completely dumbfounded by the OP.

OW image is just an example of battle pass, since some players won’t consider prestige honor system like a battle pass but it works like those, few differences: it’s not attached to a season, it have a weird reward path and it’s oudated.

Some Devs mentioned that it was an error to introduce arenas into the game, so i got your point but at this point WoW has a casual pvp public, pve, m+, collectors, pet battle …etc

I read the title as “Pet Battle Pass”

That not a bad idea though. May be we can get some new pet ornaments, collection system e.t.c

Devs could create something similar to prestige honor system for pet battles…that’s a good idea.

The way you presented this idea is going to mislead a lot of people into a false assumption. But out of curiosity I read what she had to say.

I think it’s a good idea overall because the way honor rewards work now… it just takes too damn long. Obviously there’s people who have been PvPing 10 or so years more than me. But it’s just not feasible for myself, and especially newer players to get the honor goals as they are now.

A system that encouraged people to PvP in different ways would be good.

I’ve always liked temporary achievements / points / goals. Like every week, two weeks, month or whatever time frame they give you a list of achievements and a point value assigned to them. You get 200 points by the end of the event and you get a reward. This way everyone gets to play out the achievements that appeal to them most.

PvPers get cute things like killing someone by knocking them off a cliff in EotS. And I’m not creative enough to come up with PvE and raid ideas but you get the picture.

The way you presented this idea is going to mislead a lot of people into a false assumption. But out of curiosity I read what she had to say.

You’re right, I brought battle pass because it works similar but WoW lacks on quest, dailies compared to other games using that kind of path with levels and rewards.

A system that encouraged people to PvP in different ways would be good.

Exactly and Blizzard could do something for the max honor lvl, if you get there, maybe you can still get honor lvls but the reward is gold, mats…something infinite until Devs add more lvls to the system in a new expansion or patch.

PvPers get cute things like killing someone by knocking them off a cliff in EotS.

I coulnd’t mention something that specific because not all classes can do that…unless the brawl or bg provides a way for everyone to accomplish that kind of activity.

Lots of feedback from people Ive played with and read about on the forums but major concerns seem to be: Will interrupt be on the talent tree forcing people to lose one extra point towards being viable in PvP? Will we lose a ton of passives for filler on the talent trees? How will ranked Solo Shuffle work? Is it actually happening? Will the Pvp talents be the same or different (Seems to be two different answers from two different people from different interviews) for Dragonflight? Will the P…

“Looking for more people to add possible questions they have and feedback moving forward. Really wish we got more of a spotlight for PvP in the stream reveal to get people pumped for next expansion.”

Besides, the balance and pvp talent questions, A question, If Devs have any plan to include new pvp rewards and pvp quest like “A new deal”?, please check on pvp prestige honor system that was forgotten since BFA pre patch.

There will be a “PvP battle pass” in Dragonflight. Casuals in honor gear will have to upgrade the severely nerfed PvE ilvl of that gear in order to make it usable in world content, by doing as yet undefined “PvE”. Of course, somebody who has never done instances and whose gear is so bad it is unusable in world content isn’t going to get invited into groups. My guess is the plan is for them to buy lots of carries. The requirement may even be ksm, everybody’s favorite minimum baseline PvE achievement.

There will be a “PvP battle pass” in Dragonflight