The new talent tree revamp is probably the most complex thing they’ve done ingame in a decade, but it’s something they’ve been kicking the can down the road on. The borrowed power systems were basically put in place as a bandaid fix to button/talent bloat issues. Every expansion you would replace 1-2 buttons with a new ability. Just as players it sucked because you were depowered massively each expansion.

Like going into Dragonflight were losing dual legendaries, tier set bonus, and covenant abilities, but they also massively increased the iLvl on the Lvl 70 stuff compared to current season (almost 100 iLvl difference). It’s done deliberately to make sure people aren’t hanging onto old gear in the new raid tiers and also to make you not feel like you’re doing less dps.

The eventuality though is if every new expansion adds more to the talent trees than eventually it’ll become bloated… like 2-4+ expansions from now. Take a look at the WOTLK talent tree compared to classic.

Every expansion you would replace 1-2 buttons with a new ability. Just as players it sucked because you were depowered massively each expansion.

I don’t think we need a new twist on classes every xpac. We just need good compelling content to play through.

Another take on the Priest Class Talent Tree.

I have taken the last Bluepost into consideration and I have tried to modify things that I think would be a middle ground in regards to what Blizzard wants vs what the players want. 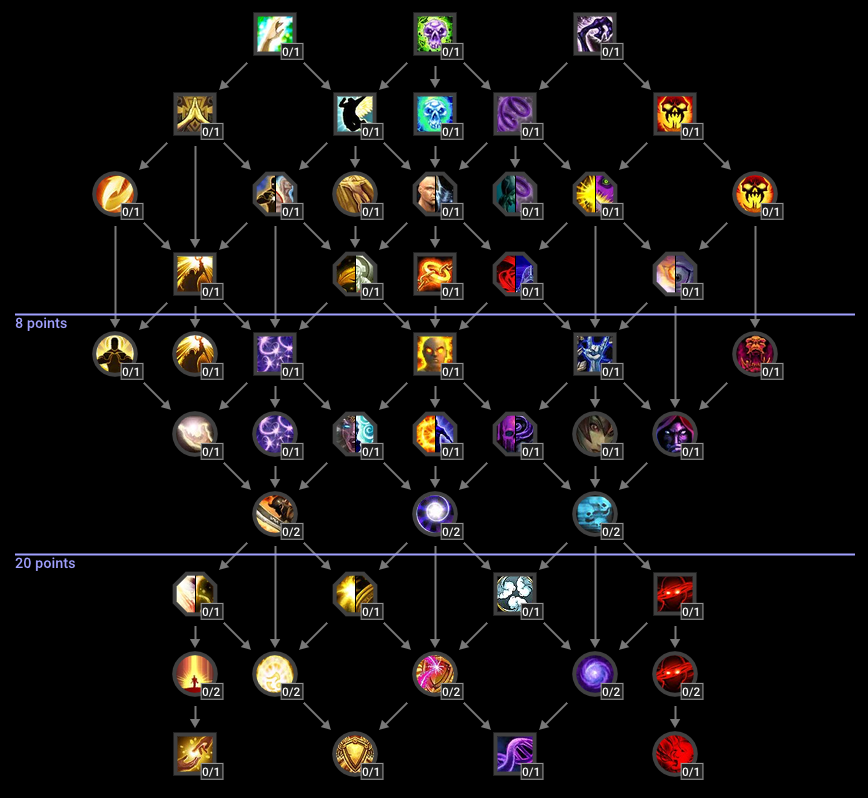 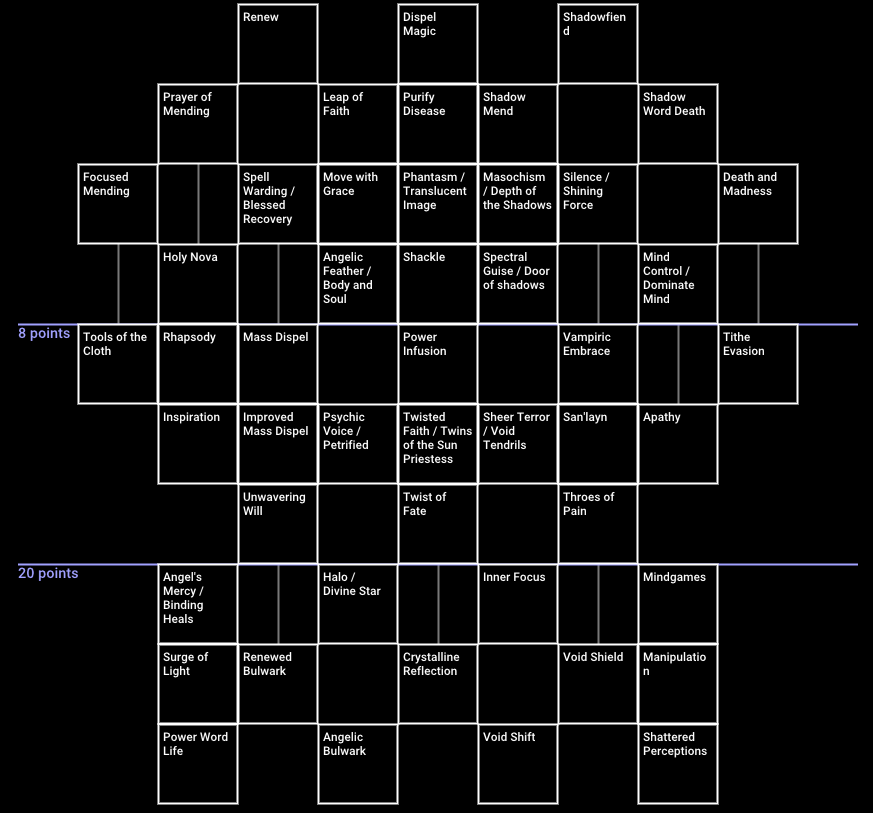 The most well known are faceless ones, oozes, sludges, and void creatures.

In its place, there’s ‘improved flash heal’ to increase FH healing by 15%, and the Masochism choice node turned into a flash heal choice node with the same effects (minus the HoT for Shadowmend). These were also moved to the left side

This means for Disc/Holy we’ve just got a 10% mitigation by self flash healing, I guess. Also is a straight buff to Holy’s healing, I suppose.

For Disc, Shadow Covenant got 0 changes, so is back to being near-useless.

There were also a couple talent renames (Shadowflame Prism → Inescapable Torment for Disc, Tools of the cloth → Words of the Pious)

Dominate mind got it’s CD reduced to 30s, so a humanoid can be perma MCed as your pet now.

Couldn’t see any other real changes besides that.

A pretty yikes change that is honestly how I expected it to go.

If shadowmend is to not exist, flash heal needs to feel good baseline for any other spec to want to cast it. If flash heal feels good baseline, holy benefits because it has more flash heal modifiers and needs to play with it for lightweaver. So flash heal can’t be buffed too much.

Blizz created a terrible design space for themselves here, I think.

Also for anyone curious - Shadow does not get Shadowmend in its class tree either (which is probably a good thing for the tree overall), meaning they now no longer have any self healing except for Vamp Embrace unless they leave shadowform.

Just on Depth of Shadows vs whatever the new name is that buffs Flash Heal the same way:

Depth of Shadows was exciting because it was attached to a heal on a CD. I could do my regular Disc business, do triage with Flash Heal, then bust out a massive Shadowmend when it’s needed.

When it’s attached to my only spammable single target healing spell, I’m pretty much never going to see that buff get anywhere higher than 5 stacks. It’ll be so minimal as to be completely lost in the noise most of the time.

It’s called from darkness comes light or something like that

Granted, I still think it’s a good talent when it comes to gaining stacks, since we’ll do a lot more healing via atonement/renew/PW:S, and purge the wicked spreads quick now. But it certainly loses a lot of value by the fact that Flash Heal is just a significantly weaker heal. Even with the talent, it’s at 233% spellpower. Shadowmend was at 352% when they removed it. So really at MAX stacks it’ll heal slightly less than what Shadowmend was healing baseline last build.

Edit: It’s not really a good talent - I wanted to clarify that what I meant by that is you’ll still get pretty big boosts from it. Just it’s really not a good spell to be buffing.

so if i saw on the latest updates it has vamp embrace removed are we getting something in its place?
Edit im not defending vamp id rather something cooler to be there I’m just curious what’s going in that slot

Vamp embrace is still there.

The cool thing we got this build is Dominate Mind became uh, kinda good now?

It’s now a 30s mind control but also a 30s cooldown. So should be able to perma MC a humanoid if you spare the globals/mana.

That’s still awkward as hell to use, but I mean it should be powerful, especially for healing priests.

Edit:
Further testing on Dominate mind - It’s absolutely possible to keep a perma MC. The pet’s damage does not count toward atonement. But that does mean we have some really interesting applications in dungeon.

So these Priest general changes were small, but pretty big.

Improved Flash Heal is where Leap of Faith was and you have to take it to node down. I think the biggest thing to note is they moved the node over from the previous Shadow Mend branch so you can take the talent so when you Flash Heal yourself you take -10% less damage for 10s. It also triggers off of Trail of Light. That’s honestly kind of big… you can keep a near persistent -10% damage reduction up on Holy on-top of the fade talent giving you a -10% damage reduction for 10s (bugged and not working atm).

Also, the Improved Flash Heal talent helps fix the throughput loss on Holy from having to cast Flash Heals more often due to how Lightweaver works. I’m pretty sure Flash Heal is going to get adjusted though.

Dominate Mind being on a 30s cd is also a really big change as well. You can basically thrall a creature an entire dungeon run and it makes the ability not useless like it was before. This is definitely going to be a very unique Priest utility buff.

I kinda expect dominate mind to be nerfed, but hope it goes through because that is some seriously cool utility despite the maintenance of recasting it all the time.

Though, the entire shadowmend->flash heal rework is a dumpster fire for any spec that isn’t holy or PvE and needs to be re-looked at.

I’m probably over-reacting, but I’m trying to rationalize why I would ever play Disc in PvP at this point over Holy for healing. Pain Sup and Dome don’t really seem worth it vs the number of useful abilities that Holy gets.

Holy has also been nerfed a lot though in arenas.

Disc doesn’t really have anything to speak of in arena right now though.

Trinity kinda sucks considering it only can be applied through PW:S which has a CD now.

Holy now has the burst advantage because of Empyreal, divine word, burning vehemence - and PvP is all about burst right now. They’ve also got the healing throughput advantage and Disc no longer has dual-spell schools so it can’t hold that over holy either.

Also I very much expect that trail of light thing to be a bug. If it’s not Blizzard is out of their minds.

I don’t think it’s a bug because Inspiration also triggers off of Trail of Light as well. Technically you get a -15% DR on yourself…

Im finiding with this iteration im lacking many interesting choices which is dissapointing. Im having less damn i really want that and that but cant, esepcially in the class tree

Says this for Mastermind…

Category changed from Talents to Uncategorized

No longer in the talents and doesn’t appear as a baseline class/spec ability.

Anyone know where this is at? It doesn’t say it was removed so its interesting as I like Mastermind but not sure where we get it at.

At least they were polite this time. And hopefully they bring back Cascade, it’s just a much cooler spell than either Halo or Divine Star.

Cascade was before my time. I read the description and it looks pretty interesting. Almost like chain heal on crack.