I am real excited to see the changes to shadow. As for all the water carry for discipline. Y’all sound like you are applying to be on the CC. None of what blizzard is changing is going to fix the core problems we have had from legion. Chock it up to one more casualty of Ion.

Omg I feel you so much. I speak brazilian, what’s your language? Curious

smend vs hw:life → Kinda feel like the same niche, in the same tree as well. A bit weird I feel…

From a super emergency heal, HW Life is better, less mana and more healing, a better CD as well, 10s past the threshold.

That’s exactly the point. Light’s wrath is basically a large group heal, Mindgames have more uses and it is available every ramp/mini-ramp.

They could finally tune the counterpart, I hate using solace on CD. Or it could have it’s CD and mana return improved.

Omg I feel you so much. I speak brazilian, what’s your language? Curious

Otherwise I agree with you points. I guess I’ll get a better feeling when I get to play it. It’s mostly an ‘on paper’ feeling…

None of what blizzard is changing is going to fix the core problems we have had from legion. Chock it up to one more casualty of Ion

Like many others, I’m actually quite enjoying post legion disc. And DF looks to be good so far on that front

I just got invited into the beta so I’ll be happy to start copying over some feedback to the dragonflight beta forum from this and other topics here. 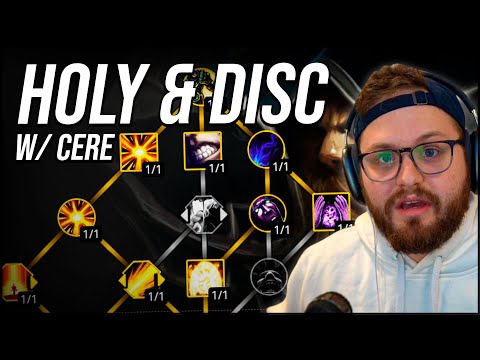 Edit: nothing really new I feel for us who are active in here. I’d summarize it as a nice wrap-up. Notably on the class tree where healer priests could do with some node placement changes.

Spirit Shell has been removed

rip SS. you wont be missed

Hey Blizz! If anyone is reading this from Blizz

I fully understand how disc’s absorbs became a problem that was difficult to balance, I truly do. It’s not fun for other healers when disc can just negate entire mechanics up front, and the raid design team has to design around that ability being there. But at the time when you changed disc’s focus to damage to heal, I really believe you traded one difficult to balance thing for another. As long as shielding or damaging to heal is a thing primarily given to disc, you have to keep it at almost un-fun levels of mediocrity or it will be a mandatory raid slot. I believe the answer to this is to give some of these tools to other specs, ideally with some flare and aesthetics that fit with the class fantasy of the class and spec in question.

Beyond that bigger design issue though, the core gameplay of disc has been pretty stagnant since legion. I am so tired of Evangelism ramps. And for people who like post-legion disc, that’s probably been fine. For me, it’s felt like the class and spec I was drawn to for a certain class/spec fantasy was fundamentally changed to something I don’t enjoy, and has since stayed that way for years now. It feels bad to put in 3x the work of other healing specs that just get to press one button and poop out all their healing and then to barely compete with them, or even fall behind them. And that’s related to that big design issue of giving disc something other healers don’t have–we are balanced around doing damage too, which other healers have to choose between damage and healing. If it’s too good, even slightly too good, it becomes mandatory.

But ultimately the TLDR of this post is this: I love the class fantasy of shielding and strategically preventing damage. I get why that needs to be pretty limited, or given to other healers too, in order for it to be remotely balanced. Right now though, with the removal of spirit shell, that fantasy is almost completely lacking from the game, and that feels bad to me. When I read, “spirit shell has been removed,” my heart sank. I had been looking forward to experimenting with a limited, cd-based shielding spec in dragonflight. And now instead I’m looking at legion disc 2.0 with yet another expansion of evangelism ramps or swapping to another healer whose fantasy I don’t enjoy either.

Anyway, maybe I’m a very small minority and not worth designing around. But this change in particular made me come back to the forums and post about it, and I hope someone reads it.

Holy dps just got a lot more complicated. The introduction of Mind Blast on a short cooldown, Empyreal Blaze (my beloved), Divine Word, Mind Games (which can be lowered like a Holy Word), Shadowfiend (3 min cooldown), makes it fairly random what you’re going to press next. Tools of the Cloth makes PW: Shield another button to press every ~12 sec. Managing SW: Pain on single target is annoying and you will still need to use Divine Star on cooldown in single target. Since we’re still level 60, I’m missing Light of the Naaru, Harmonious Apparatus, and Apotheosis. Hooray for the most complicated ranged dps :)))

I played around with this a bit on the beta and got a feel for the new damage routine.

The current damage routine is the same as it is now except you got Mind Games and Blaze to weave in every 30s.

Divine Word is also really strong. You can activate +50% increased single target + renew healing, +25% increased crit chance on those spells, and -25% reduced mana cost for 15s. It’s easily a more powerful Apotheosis in my opinion because it’s cd is also half as long.

I don’t know what it does for damage though. It’s not working atm.

You re not alone. I love Spirit shell so much I was looking forward to test it soon, but now with that gone I’m so sad, I can’t even describe, I lost 80% of the interest in the next expansion cause that’s what I love about disc, the shields. I really hope they revert this change, but with no hope since there are a lot of people bashing Spirit shell since it’s returns

The playstyle must be so fun. That’s why you see bunches and bunches of discipline priest. That’s right you don’t.

You re not alone. I love Spirit shell so much I was looking forward to test it soon, but now with that gone I’m so sad, I can’t even describe, I lost 80% of the interest in the next expansion cause that’s what I love about disc, the shields. I really hope they revert this change, but with no hope since there are a lot of people bashing Spirit shell since it’s returns

Damage mitigation > throughput healing is the problem. Preventing and reducing damage is much more powerful than healing after the fact. This is why Disc Priests were S-tier in Castle Nathria because of the 1 minute Spirit Shells.

The issue was all the things that were overpowered: scaling to 60% of the priest’s health and 1 min CD with almost every encounter being 1min burst damage, 100% of the damage dealt. When it became 80%, capped at 11*SP and 1:30 min, everything was good to go. I’m really torn apart by this change…

i think the issue is in high level play it would be sub optimal at best, but when it works its super degenerate and ruins the other healers fun.

I’d rather they bring back Luminous Barrier as a choice node against Evang or something for people that like big barrier moments. Well-versed players wouldn’t take it, but it’s there for people that want it. Spirit Shell as it was in Nathria or in WoD is not okay, obviously. Spirit shell as it was post-nathria also really wasn’t okay because it was nigh-useless for the vast majority of players and became harder to pull off than a standard evang ramp.

Whatever they do, I’m REALLY glad that we didn’t get Evang + Spirit Shell builds becoming meta again.

hadnt seen it. thanks bro

I dont mind having 2 weapons bro and not just one. Gives you moree options. Say your in a key and you use life and suddenly another dps gets messed up. Your spell is on cd. but ah ha, you have empowered smend to the rescue. Cant have too many poweful options

Yeah its getting old for me too. bake the mana back into mind bender Sfiend

Dont think anyone will take this now. Could be wrong

Edited for Language by the Moderation Team.
Forum Code of Conduct

Dont think anyone will take this now. Could be wrong

With yesterday’s update, it seems to become ok I feel → https://us.forums.blizzard.com/en/wow/t/dragonflight-beta-development-notes/1278546/11

will read that after the vid

I’ve been wondering for a while and nobody seems to have mentioned it. Since you have beta. Can you tell me if Dark Reprimand (with twilight corruption) can heal as well? Tooltip only mention damage so I’m wondering…