Ive been consistently dealing with mechanics from all 3 guys but around 50-45% they just go hard and spawn like 2 runes, 2 dark wings, whirlwind and blood of the father in like 10-15 seconds and ive been dying to those damn valkyr because i have to break the runes or i die to the runes.

I dont remember this challenge being so hectic on legion and overlapping so much mechanics in a such a short span of time.

Arcanes who’ve done this challenge could you give any advice?

I kind of took from Syn’s video and pretty much had to change how to handle Sigryn herself and positioning from that. Also, make a focus macro for polymorph and make sure to put Sig on focus before the battle starts. Also, make sure not to accidentally blink outside of the barrier because I had a lot of my attempts reset because of my poor positioning for blink

But, what I did differently with my opener compared to syn was make sure to have cc proc before start then fish for 2 more. After I got my proc I used all of my cds and interupt the caster to stack them up for more aoe damage on all 3 with an arcane barrage before the ap ends and after and arcane orb. Then focus on keeping Sig and the melee guy slowed and rooted if you can. Only polymorph Sig when she’s about to cast blood of the father. Poly her too much and she’ll just immune at the worst times and eventually wipe you with blood of the father. When the caster puts the shield on himself and starts his big wipe cast you can just use arcane blast and cc procs to clear it since it’s a slow cast, but others would say to use a cd to help which is the safer bet, tbh.

Other than that, watch for the Val’kyr and runes and your set. You can just focus on the caster only and use arcane explosion while on the move if you can’t use anything else with at least 2 of them stacked around you. Also, make sure Sigry does not throw her spear in the middle of the arena, because that could cause one of the runes to spawn right under the fel pool and cause you to take an unnecessary amount of damage just running through them. That and you could end up missing a rune if one shrinks before you notice that it’s under there.

Unfortunately, it’s a DPS issue. You sound like you have a pretty good grasp of the mechanics and are only hitting a wall so to speak when they all start chaining their mechanics together. That’s intentional and serves as the enrage timer for the fight. In Legion this wasn’t a problem because the legendaries combined with a fully upgraded artifact weapon gave you a huge boost in DPS and you were able to burst them down way before that point especially if, like most people, you did the challenge later on in the expansion when you were able to outgear it.

Unless you can push your DPS high enough to kill at least the first boss within 3-4 minutes you’re not going to be able to handle all the mechanics going off at the same time and likely wipe. It’s a game of attrition at that point and you’re constantly playing catch up because when all the mechanics trigger at once it’s all you can do to try and deal with them and you certainly can’t do any damage at the same time. It only snowballs from there and you can’t recover from it.

I really don’t know what advice to give because there’s really not much you can do to improve your DPS given that your gear scales down. Farming old items that scale well with Timewalking isn’t going to give that much of an edge anyway and is also something they never intended and something they’re actively cracking down on even as we speak.

The bottom line is that, while most people can master the mechanics given enough time, not everyone has the muscle memory or simply the ability to not only handle the mechanics and stay alive but also do enough damage to clear the tight DPS check on top of that. If even a single piece was toned down then it would be a different story.

As is it, unless they do across-the-board nerfs to boss HP the vast majority of players will simply not be able to complete the challenges and that too seems to be intentional on Blizzard’s part because it’s become very clear over the past few days that this entire event is geared towards top/professional players and isn’t tuned for more casual ones.

The whole thing is odd because Timewalking has never been billed as top end, cutting edge content and frankly neither was the original Mage Tower because it could be outgeared but there you have it. Just the latest disconnect from what devs think players want. I guess that’s what happens when you put a self proclaimed “elitist jerk” at the helm. 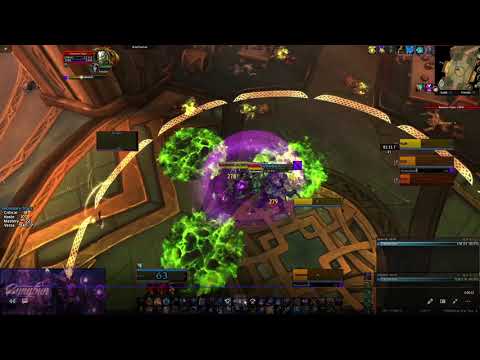 This video was really helpful for me.

Thanks all, I guess ill work on my DPS as, yeah im reaching 45% 4-5 mins into the fight and they just go bananas with their abilities.

You want to try and position them together as much as possible for cleaving since they all share a single health pool. Sigryn casts Blood of the Father at specific points during the fight. If you can stop her cast with polymorph, then you can hit her and go back to cleaving them all. I made a really simple macro to help with polymorph:

I was hitting enrage, and realized I could just ignore the caster guy’s shield, which is a huge amount of hit points to burn through.

It does about 60% of your life with barrier up & greater invis, and you just get a heal orb after it goes off anyway.

Then youre free to just use your DPS CDs as soon as they’re up.

The other trick is to use alter time to ignore mechanics, as well. I used it when the dude was throwing axes, as that stuff was hard to dodge and too much movement to DPS. So, alter time, just plant and eat them all, and let your HP reset.

The HP orbs heal like 70% or something, and are predictable, so you can get hit by stuff when they’re coming up. The less you move the more dps you do.

I didn’t do nearly as much damage as the guy in the video, woulda been even easier with his opener. Arcane isn’t my main spec ;p