I’m once again looking at the 10 pictures, the 10th picture exactly, from that model that was referred

There is nothing that says it’s a rosewill PSU…

Black grate, a white sticker (which clearly does not say rosewill), the 3 prong plug in for said PSU

For $1200, that is currently sold out on Newegg right now

The exact one canadiana said

I know there’s a PSU though, all I’m asking is
where is this said rosewill PSU you claim?

Maybe they’re just looking at the back. The listing says 600 watt, and while I can’t find one that looks like that for 600 watt of the build referenced, I did come across this Rosewill unit that does look similar(at 650 watts) -
https://www.rosewill.com/product/rosewill-hive-series-hive-650s-continuous-650w40c-power-supply/
Note the grill holes, switch, and sticker. Plus the location of the internal components(see silver/yellow). I only did a quick search, but that’s the closest I could find to it. Not sure if they make a 600 watt similar to that one, the listing/photo is wrong, or it’s another brand with a similar design.

However, you can’t always tell with the photos with these pre-builts depending on the company/model. Some companies won’t tell you a specific part, because they put in whatever they have(or better equivalent) to fill their listing requirement. Some will pull from higher quality components to fill the listing product requirements, some won’t. So often times what they show in the pictures is partially meaningless, just a guide of what range of components you can typically expect. But again, depends on the company/computer model as to what parts may change from the photo.

I originally thought Kag made a simple mistake in regards to the shroud, but they seem to be in the right direction, at least from what I could find. However, even if it is the part I linked(or what Kag thinks it is, if it’s something different than the one I found), it’s possible that specific part won’t be in the build purchased, but it should be sort of an equivalent to it.

I originally thought Kag made a simple mistake in regards to the shroud, but they seem to be in the right direction, at least from what I could find. However, even if it is the part I linked(or what Kag thinks it is, if it’s something different than the one I found), it’s possible that specific part won’t be in the build purchased, but it should be sort of an equivalent to it.

I just threw the image into a vector converter and then blew it up, and looked at the sticker (model number).

However, your point about the pictures not being exactly what you get are valid.

If it doesn’t list a specific brand, theyll often ship the “same machine” with different parts in it, as it only has to meet the listing.

Its still not a good deal, no matter how you slice it. They aren’t using high quality parts in the REST of the build, what in gods name makes anyone think they are going to use a good PSU if they can throw in a junker?

Hint: They aren’t going to.

Even at the reduced/sale price, its a gamble. When it is at its normal price, you can literally get a better computer for the same price from NZXT.

My advice to anyone looking to buy a computer, is to sit down and learn about them. Learn about the specs of each part, how it all goes together. Teach yourself how to fish.

Recommendation threads are often filled with hyperbole, information-overload, and arguments between enthusiasts. It’s like auto mechanics with decades of experience arguing, when someone asked how to change a tire. 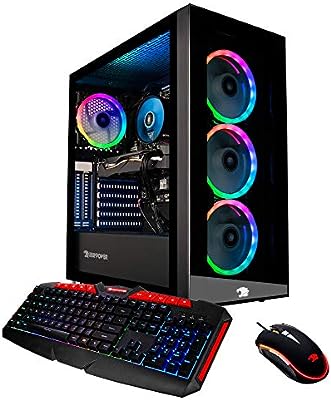 Also, i wouldn’t you recommend buying it from Walmart.

i also recommend you look up guides and all and how to build one and recommend to take a look at this puppy as reference and the website to use to see which is compatible.

Their is a lot of chaff to cut out if you don’t need anything, like a 1080p monitor. (i’m assuming most people have that)

Would not recommend a non-HT Intel CPU right now (like the one in the build above) with new chips, all with HT, releasing in a month or so