He looks like him and even talks like him lmao. I wonder what games this guy plays on the PC he shows off in this video. Heck even his message sounds like something Neuro would say.

he has a tesla

that being said , there is huge racket on automoble tech , that is not worth going in on hear .

he has a tesla

that being said , there is huge racket on automoble tech , that is not worth going in on hear

The batteries are way too expensive and can’t be replaced on the scales that they are selling cars ergo the price of batteries will go up over time. There just isn’t enough lithium on the planet. Over the lifespan of the car, it’s far more cost effective to just buy a normal car and eat the gas prices, and that’s assuming gas prices stay high and batteries stay low and that the efficiency of gas/diesel engines doesn’t go up. Almost all those assumptions are wrong.

bra desile was old and worn tech since the 50s

desile was old and worn tech since the 50s

There are new prototype diesel engines hitting 60% thermal efficiency. For comparison, most gas engines on the road are about 20% efficient. Gas/diesel are basically in their infancy as a technology, with lots of room for improvement. As is, electric can’t compete on a cost-by-cost basis. Electric motors are already near 100% efficient. The batteries could use a lot of improvement, but there are a lot of good reasons to doubt that batteries will ever match the energy density of gasoline. It’s extremely unlikely that electric cars will survive market competition long-term. They will forever be a niche market for high class individuals. 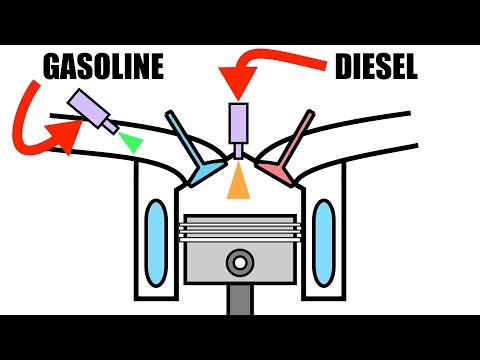 I love desile , i prefer the old ones

Tesla is a laugphing stock

But electricty from non fosile fuels is the future .

The entire planet depends on the sun , why not our mechanical labor force ?

But electricty from non fosile fuels is the future .

The entire planet depends on the sun , why not our mechanical labor force ?

“THE” future is rather bold. Do you know what’s happening in California? Everyone is buying generators. California’s power grid is overloaded as is and so they have rolling blackouts and asking people not to run their A/C units. Politicians think this is an effective way to limit carbon output because the state will just shut off power to your house. It turns out people don’t like having no power, so they are buying generators to run when the power goes out. Do you know what the efficiency / emissions are for those generators? Lmao it’s ten times worse than having a power plant generate the power.

Mind you, California wants to shove their entire transportation load onto the electric grid, energy prices will continue to grow due to Ukraine, and California’s electricity demand in general will grow. This is just the beginning of their energy woes.

People like to say that electricity is “THE” future but it clearly isn’t. There are technologies that could change this, but on our current trajectory it’s totally unsustainable. It’s like a train barrelling towards a broken bridge. Politicians don’t care. They will deliver whatever the voters want as long as the politicians can use it to get elected. They will exit this dumpster fire with a 10 million dollar book deal to pine about their struggles against racism and climate change while completely ignoring the real issues. In fact, they love creating issues because they can leverage the issues to get people to vote. If they actually fixed issues, political engagement would plummet. It’s one of the reasons Democrats didn’t codify RvW: they wanted to leverage it in future elections.

The difference is Batzy is jealous of this guy’s set up. I could see you driving a telsa just to say that you’re wasting more resources than the gas guzzlers.

The difference is Batzy is jealous of this guy’s set up. I could see you driving a telsa just to say that you’re wasting more resources than the gas guzzlers

Do you mean the peace sign and composter and rain collector? Nope. Why would you compost human waste? That’s code for “I don’t have sewer and I pretend the smell doesn’t bother me”. How much money did he spend on rain collection and what on Earth is it supposed to accomplish? This guy gives me serious hippy vibes. You know, doing things that feel “good” but don’t really serve a purpose. A better strategy than a tiny home would be a trailer, towed by a truck, because you can pick up and leave if you need to. You aren’t tied to that location. Even without sewer/water, you can have plumbing if you service it every now and then. You can go literally anywhere. You can find a creek somewhere in the boonies and park it. With solar panels and starlink internet, a whole host of remote jobs can be at your fingertips literally anywhere. Why is he driving uber? It’s just nonsense. Wind and solar - what on Earth. Buy a plot of land in the middle of nowhere with some water rights and install some hydro power. There are kits for it and the land is cheap. You park your trailer there with unlimited free power that doesn’t go away when the sun doesn’t shine.

I have a friend who lives out of a house boat. Literally. He’s a software engineer. The boat is solar powered, programmed to follow a GPS route and avoid obstacles automatically. He just chills out, writing code and playing video games.

You’d think coding video games doesn’t have much real world use. Boy, would you be wrong. The same algorithms that help SC2 units walk around terrain obstacles can be used to make boats not crash with minor modifications.

Yeah, it’s kind of weird having human waste like 2 metres away from your garden where you apparently grow vegetables. The Dude probably lives and works off DoorDash. Isn’t it really likely the waste will contaminate the soil?

Yeah it’s not well thought out but he thinks he’s on to something so he has to give the internet advice. It reminds me of Nuero’s stream. Instead of doordash it’s twitch streaming lmao. Instead of composters it’s attitude advice / zen nonsense. I’ve heard rumors he comes from money. It would be a little awkward to be a twitch streamer when relatives are CEOs, don’t you think? I detect some friction there.

You know, my family had loads of money, but not by the time I came around. If you can imagine it, all the boats and car collections etc. They are the ones who got the short end of the stick, though. Wealth has to be maintained and the skills to pay the bills are rare which is why wealth is rare. They rolled a 9 out of 10 in inheritance money but I rolled a 999 out 1000 in other categories. I wouldn’t trade places for even a second. I listen to these lawyers stream every sunday and I love it. I recently learned my Grandfather used to listen to a lawyer’s talk show on the radio where he’d followup on ongoing legal cases that had passed from the popular media’s memory. Huh. How about that. That’s biology for you. There’s an AI that can read brain scans and predict with a high confidence if someone is conservative or liberal. There are literal differences in brain structure. These people who think biology is a hoax are just nuts. You read about history and the witch trials and all that sort of nonsense and think there’s no way people are that dumb today, right? Right. Of course not. It’s impossible. They have the internet for crying out loud. You can read about anything or watch a video about it. We live in the silicon age and most people are stuck in the stone age. Ooga booga.

It took me 5 minutes to find a piece of riverfront property. Slap your trailer there, install a small dam and a hydroelectric generator, and do your tesla stuff my man. This composting/rain collecting nonsense will have you chasing your tail until you don’t know what direction is up.

the eltes have worked on this sort of melt down for some time .

evil dose evil , nothing new there .

im saying that there is merrit to electic motors , namely the way electricty is produced that is hidden away . gota keep that meter running .

the eltes have worked on this sort of melt down for some time .

evil dose evil , nothing new there .

im saying that there is merrit to electic motors , namely the way electricty is produced that is hidden away . gota keep that meter running

I have no idea what you are saying. Whatever it is, it’s wrong.

Heck even his message sounds like something Neuro would say

Neuro is a trash zerg player. Hate that guy.

Lmao they removed the Korn song. It’s a great song, and a perfect representation of the average Nuero viewer. I find it so weird that he goes out of his way to explain to people how to not rage over a video game. Isn’t that common sense? Of all the fun things you can do inside SC2, why lecture people about attitude? That’s just a weird thing to do, man.