The enemy has channeled void energy into the trains and their own forces, effectively creating a shade armor that doubles their durabilty. This unstable technology has been known to combust when dealt massive damage, setting the ground on fire upon death. Keep the enemy at a distance to ensure your own survival.

Commander of the Week winner of last week:

Easy one! Maybe Artanis P2 (Tempests) or Alarak (Ascendants, WWs (P1) or Destroyers) could be fun.

Scorched Earth means using air units when possible to avoid the flames. It’s not really a big deal except for the flame that the train leaves behind, which covers a wide area.

Just Die! is the difficult mutator here. The trains are all supposed to have two lives, but sometimes they bug out and instantly die upon reviving. A theory is that it doesn’t revive if multiple carts are being hit before it goes down. If the train revives, then you have to continue attacking it further down the track, which might put you out of position. Enemies also have two lives, which means you’ll have to spend more time fighting them before you can hit the train. Commanders with high dps will do well here.

Alarak (p3) https://youtu.be/F2NjVkujVVw [mass destroyers (because I can)]

Questions about any of these runs are welcome. 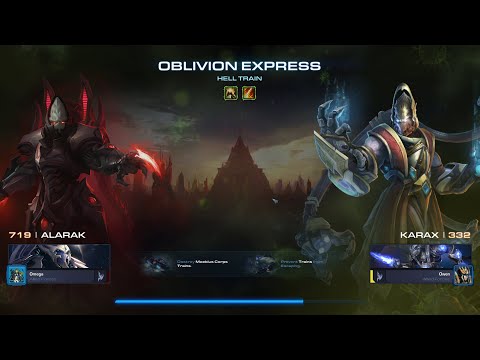 I get the feeling that this one will depend on the AI’s composition. The first try my teammate played abathur P2 (Tunneling Horror) while I played Vanilla Swann level 12 . We got skyterran as the enemy composition and we couldn’t keep enough units alive when libs hit us early killing my goliaths and bc’s yamatoing each time our units twice. Due to the lack of DPS-output from the remaining units two trains escaped → end of game. This composition in particular felt very hard and I would rate it more like a +4/+5.

The second attempt my ally switched to Nova (Soldier of Fortune) going for mass libs and I went for mass wraiths. This time we got robo-reaver and we cruised through the brutation very easily. This even didn’t feel like +.

Good news: if you have a very lowlevel commander, keep rerolling until you got a groundcomp and go mass air.

Bad news: if it’s an aircomp (especially skyterran) expect a freighttrain of pain.

one swarmy player, or straight antiair may help, you dont need both players to go antitrain, then they hold the units deep at the front, and the train killer comes in and leaves for the next

Brutal +3?
I really don’t understand that classification after all…

Bad news: if it’s an aircomp (especially skyterran) expect a freighttrain of pain.

As Raynor P3, I can’t just go Banshee only and had to throw in vikings to deal with them

As Nove P1, it messes me up trying to transition liberators between different modes…

If I get a ground composition, can probably win in a fairly straight forward manner…

Easy week. The only trick is having enough dps for the first couple of trains, since they respawn.

Or they don’t (since they can bug out and die instead of reviving).

Cleared as P1 Mengsk with a Karax ally. Had skytoss with zealots as the army comp so Karax’s turrets were getting rekt. But they did buy me enough time to hit critical mass on my ESO’s to clear the last half of the game. I think it would’ve been way more easy if we were against terran or a mostly ranged toss comp.

After some failed attempts as Mengsk P2 (with different low-mastery P0 Karax allies), I switched to good ol’ Alarak P3 and got a 113ish P2 Swann ally. It worked immediately, including both bonus trains.

By the way, Brood Lord comp as Mengsk was pretty nasty due to the fire.

Enemy comp was Protoss with Reavers and Disruptors (R&D). Pretty oof for Alarak himself and the few Ascendants I had at that moment. Instead of trying to shield some Ascendants at home and power them up to decent shield levels until sending them out, I just made a Double Robo Wrathwalker switch, which worked fine.

Spammed more Supplicants than usual to be more safe, to avoid Havocs and Destroyers getting eaten. Sometimes I still danced around with Alarak and with my ground troops, because I didn’t trust all those R&Ds. You want them to hit Alarak, but he needs to be far enough away from the rest due to the AoE damage.

I usually kept Empower Me for double trains. First time I charged in, he ate so many Scarabs and Orbs that I lost all Supplicants at once, and I learned from that.

Swann was busy rebuilding all the time due to the fire. He played well, I was only sad that our expo had 0 Vespene Drones.

Artanis P2 always gets the job done. Placing an Observer on a project power field with Dragoons, Immortals and Reavers to increase attack speed and mobility.

Observer doesn’t do that… it’s whenever you move the power field. (using the warpin bonus mastery)

Unless, it is in surveilance mode when playing Artanis P2. Just place the project power field with your units inside the field and deploy everywhere on the map.

place the project power field with your units inside the field and deploy everywhere on the map.

That’s just how P2 works, it makes no difference whether there’s an observer there or not.

Did that mutation in Normal with Tychus P2.

Good thing I didn’t pick a harder difficulty or another commander, because my ally was a lvl 2 Raynor of the “I will put my rally point on an ally unit and end my contribution there” species.
Well good news is he was on Normal; Casual would have been better, but at least he wasn’t in Hard, and he even slightly improved at some point, reaching the top of the basket at the lowest point in the pile of baskets.

I was glad the demolition charges remains on the train when it respawn, accelerating its 2nd death (and sometimes it felt there wasn’t a 2nd life lol).

I’m a bit sad I no longer have the motivation to try easy mutations like that at Hard, but the bad ally that is the daily “Chaos Studios”-like hazard shadow still hinder reaching the light of hope.

I was glad the demolition charges remains on the train when it respawn, accelerating its 2nd death (and sometimes it felt there wasn’t a 2nd life lol).

I’m a bit sad I no longer have the motivation to try easy mutations like that at Hard, but the bad ally that is the daily “Chaos Studios”-like hazard shadow still hinder reaching the light of hope.

It might be obvious but it’s still interesting that the lower the difficulty the greater the challenge your ally is likely to be. I’m frequently thankful that queueing into a Brutal+1 game that i can generally expect my ally will have a basic handle on the macro and micro requirements of their commander and an ability to engage in basic teamwork. I often offer to to help level people’s commanders in chat and am a little dumbfounded sometimes when people who say they normally play Brutal can’t even field an army beyond a trickle of T1 and T2 units or the “build a few of everything” strategy