You called it with Pink Mercy

well in my view they are trying to have the game both an esport and a casual game and they are doing a poor job at both.

Something does need to change for OWL and player interaction. I loved OWL personally, but it did feel imposing at several points.

I think advertising in game got a little obnoxious. As stated in the OP, the screens were boring and unappealing. I think to remedy this Blizzard could advertise the OWL on the main screen at the start of a stage and the end. Between the first and last weeks, a small visual queue between these could alert players that OWL is streaming, but would be rather unobtrusive.

The title screen was also boring, showing preset heroes, simple stances in team colors. In addition to the thought above, give us something like the Genji Tracer screen now. Throw a little action in there between the teams a la Winter Wonderland snowball fight.

There are hundreds of watchers that have donated literally thousands of dollars over Twitch and I just don’t understand it. I don’t ever just freely give money (aside from actual donations) without getting something in return. And even the skins were too much man. At that, there really wasn’t any discount for purchasing skins en masse, which I thought was kinda crazy.

There are lots of ways to improve OWL, I just hope Blizzard takes some advice.

I really don’t understand the strong feelings people are having about these skins. They’re two skins. They’re cosmetics that have no impact on the game and they’re meant to be an extra reward for people who follow pro OWL. It’s not like these two skins replaced otherwise free content. They were created specifically for the All-Star weekend and they represent the Atlantic and Pacific divisions of that game (made up of OWL players). I don’t see anything wrong with making them solely purchasable with OWL tokens. I accumulated hundreds of them by watching the matches. I think the possibility of cool premium skins in the future is great. I bought the Mercy one because I thought it was awesome, not for the charity. If you like it and think it’s worth the money, great. Buy it. If not, then don’t. I don’t get it.

You’re right, although by buying the skin you supported them.

Im even fine with exclusive OWL content; but not at the expense of new content for the base game.

What reason is there to believe that these skins came at the expense of new content to the base game? They’re purely OWL skins. They’re for the two divisions of the OWL All-Star game.

The strong feeling is the lack of content in the game is made frustratingly more obvious when you add a paywall.

If this game was more active like Monster Hunter World on updates with contents, skins, and just more things to do then the pay wall would be less of an offender.

Those of us that have had the game since launch pretty much got everything to get and played modes to thousands if not ten thousands.

A hamster and same ol Lucio ball just ain’t gonna cut it imo. I have so many skins I personally don’t care. But I find it dumb and greedy for them to charge so much or worse wait til end of owl season when people spent tokens to tempt them to drop more money.

It’s just a DB move I expect from Activision not Blizzard. Guess Activision is rubbing off on them

And Blizzard skins are lazy. You want skins worth having? Play Smite. You get new taunts, jokes, voicelines, animations, effects, etc. Their skins go above and beyond to be awesome. Meanwhile Blizzard paywalls the bare minimum now.

Why is Gengu Pacific skin a fire skin anyway? Is pacific an ocean of lava or what?

Well, if you put it that way. Then sure it’s a different setting. But, not all players have the same mindset, and as consumers you have to see the sides of the coin. For some people, skins/emotes/voicelines are still essential; a part of the game (not just gameplay, aesthetics counts).

For those people, if they choose the Paywall, it’s like them saying: "Hey, hey, Blizzard Activision. I’m fine buying this $10-30 OW Lore or Comic exclusive to the Overwatch Leauge/All-star event!

Anyways, the actual thing to debate is whether this actions are Predatory or not. In my eyes, yes. Because of the following conditions and evolutions:

Hey everyone, We apologize for this inconvenience. This Legendary Lúcio emote was intended to be available only for players who had purchased the Overwatch League All Access Pass on Twitch. It will be available for purchase with Overwatch League tokens at a future date. If you purchased tokens with the intent to unlock this Legendary Lúcio emote and would like those tokens refunded, please reach out to Blizzard Customer Support. Thank you for your patience.

Those are bad apples/anti-consumer move. The fact that they lowered the skins from 300 to 200 OWL tokens means that they were testing waters.

Yep, keep alienating the customers with good contents and sure enough they’ll get hate… It’s good that they lowered the price from $15 to $10 (which seems to be a final move/primer towards paid contents). However it’s still a high bar, for a game with high player-base. 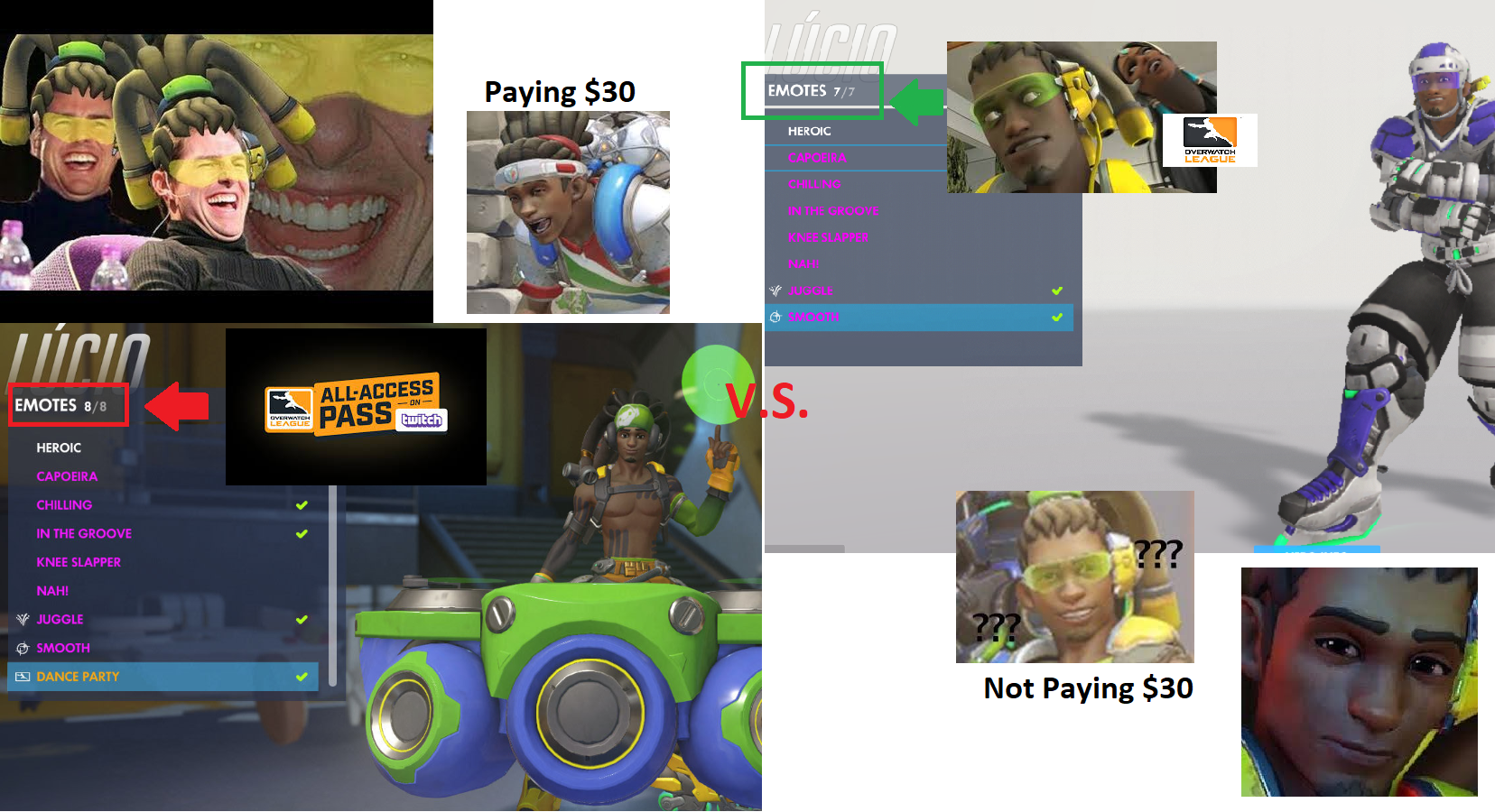 I agree that there should’ve been more notice about the skins being purchasable with OWL tokens. People might’ve saved them if they’d known that there’d be new skins offered in the future.

As far as the mentality related to the existence of the skins, though, I’m not sure that’s relevant. Whether or not people see the skins as OWL skins for OWL supporters doesn’t change the fact that that’s what they are. A lot of people don’t even seem to realize that they’re related to OWL at all and they just see content they can’t have without paying for it. I get that that would be frustrating, but not understand what the skins are for doesn’t justify misplaced outrage related to them.

One big difference is Fortnite really only ever requires a single cash payment (for Save the World), after which you have essentially unlimited ability to farm V Bucks and earn skins. Get a season pass, that’s probably 6-7 free skins right there, and then between Pass VBucks and STW VBucks, you’ve got enough for another higher-tier skin or two per season. When you do make a purchase, too, it’s direct purchase (i.e. you buy V Bucks, then buy the item you want), so there’s no chance of you not getting your desired item.

By comparison, Overwatch has RNG lootboxes, and while you can also farm currency/lootboxes in Overwatch, the RNG does significantly exaggerate the grind. Moreover, in the event that you buy a lootbox and don’t get what you want, you either… buy more lootboxes, or grind more. This is on top of the $40-$60 price tag on the game, whereas Fortnite is free (or $40 with STW). And now, there are skins which legitimately cannot be obtained without either watching OWL or paying money.

The RNG element alone makes Overwatch’s mtx system substantially more predatory and consumer-unfriendly than Fortnite (also disregarding the large quantity of junk items like sprays and icons… Fortnite has these too, but not nearly to the same volume, and they also don’t crowd-out the loot pool b/c of the lack of RNG). Add in the OWL skins by which Blizzard is essentially self-promoting a league or asking for a financial substitute to viewership, and I don’t think it’s really at all fair to compare the two.

Because the pacific ocean is also home to the “ring of fire”.

To everyone who said the mercy skin was opening the door for this: you were right. You were right and I’m sorry.

I accept your apology.

I hate the state OW is going in.

It’s about time players start voting with their time and their wallets. Don’t like the state that the game is in? Don’t like the practices Blizzard is using? Don’t play the game. Don’t watch OWL. Don’t even use a Blizzard app/service (except maybe the forums) until it’s fixed/changed/better. There’s no reason to do anything except post on the forums about it once, attempt a discussion over it, then leave the game and come back every month or so to see if it’s better.

For the uninitiated, if you got a perma ban on the forums, a 1 week ban in game was also put on your account.

At that moment, as soon as I could, I uninstalled OW and any other Blizzard-related application on my computer.

Here’s the thing. I disagreed with what they were doing. I stopped playing. If enough players do this, Blizzard is going to have to do something. Right?

I’m honestly sick of OWL, Contenders or something else being thrown in my face whether I want to see it or not. Like recently on the EU region there was this autoplay stream (Contenders I think it was) on the Battle launcher, which I had to pause every single time I opened the launcher window. Now we’ve got this glaring white background with two somewhat ugly and overpriced skins that are stuck behind an OWL paywall, which aren’t even really themed for OWL. What about the Summer Games event, without that as the main menu background it sure feels like there’s no event now.

Suffice to say it really feels like the base game is being neglected, especially after the Mercy fiasco which is still ongoing.

Why is Gengu Pacific skin a fire skin anyway? Is pacific an ocean of lava or what?

Because it wasn’t designed for the event, it is just two skins they grabbed from the pile. Atlantic and Pacific are Fire and Water? pls. They picked 2 cool ones and monetized the **** out of them. Possibly part of a cancelled event.

Frankly fire and water sounds like they should be in a summer event. A very disappointing summer event that left people wondering what happened to the cool skins.

‘‘It sounds like your childish and want all skins for free’’

Immediately went for personal attack ay bud? You didn’t even try to to debate my points. You instead make an complete assumption about my argument.

News flash kiddo since we are going to be personal here, Blizzard is not an starving company. Quit being an corporate shill and buying into this crap.

Apparently even after 6-7 answers where I explain my point and how the “There’s people who can’t afford these” doesn’t count cause I can’t buy them myself, where i say that there’s nothing wrong with microtransactions etc while all you have been saying is that “it’s wrong” fot some obscure reason Im still not debating. Tbh calling someone childish doesnt seem that big of a deal, butvsorry if I offended you. Honestly tho your pointless raging looks childish

Don’t take me wrong. I saind I’m angry, and that it doesn’t feel right, but I’m not super mad at it. No strong feelings beyond shacking my head. I’m not going to left the game, I like the last big patch of OW. I just said, I would have no problems with this content if they’ve worked better in the event, specially the skins, that are the most lame we had in any content. Just look at Rein, they just put over some sport thing over he’s armor and called it a day. And I’m not happy about it. But I’m not going to burn down Blizz for it.