There’s no reason to really even play tanks right now. It’s the most hated on position and the 50% chance your DPS are worse than the others, they want you to shield bc they’re bots. None of the tank chars are fun besides ball with an aggro team. Is it that hard to make new tanks?

Yeah, I’m a bronze tank (Yep, I’m trash) and as main tank you just feel helpless as your team is constantly farmed by enemy Junkrat and never contested, or your dps constantly feed 1v6, running past your barrier. Or enemy Hog and Dva duo just waltz right up to you and murder you as all 4 dps on either team irrelevant, all having suicided or off on mad flanks.

I’m just going to two trick Zarya and Hammond next season. I’m just fed up of being a punching bag at the mercy of whether my dps are any good, or if I even get healed.

Edit: How’d you suggest make tanking more fun? Something needs to be done. This problem won’t go away with ow2…
I’m thinking clans. Tanking a lot more fun with my mates in qp than with randoms in comp. Some level of comradeship really does help.

I don’t have many hours in this game and it’s already growing boring. I’d suggest additional selection. It’s currently a DPS game with a little spice from supports. (genji can go with brig and be deleted)

Does change a lot at higher levels.

I’ve tanked in 2700 games in prior seasons, with a higher SR buddy, and the game was far easier than trying to tank now, at 1400.

I set up at the right point, used halt and fortify as required, tried to protect my supports and won both games. dps applied pressure through the barrier and made use of the space I made.

Also remember tanking mid gold and I’d halt an enemy and our Widow would pop his head the second he was out of cover. Just really solid.

Biggest issue with low elo tanking is how utterly random your dps are, as you said.

And what makes it worse is how team dependent you are. There are some heroes (Echo) that you just can’t counter as a tank. If your dps are Junkrat and Reaper and enemy are Pharah and Echo, you’re kind of boned. 90% of the time low elo dps won’t swap, so it’s up to you, but tanks suffer from limited selection and team dependency.
At least support can try to hit scan with Bap or Ana.

And if your supports are super flakey, then Rein is pretty much impossible to play, and Orisa becomes a fat dps with personal barrier that plays around health packs.

You can carry hard with Orisa, she has an insanely high skill cap if you’re really looking to climb. I’m not the best to give advice but this I know is true, except she’s not fun at all. 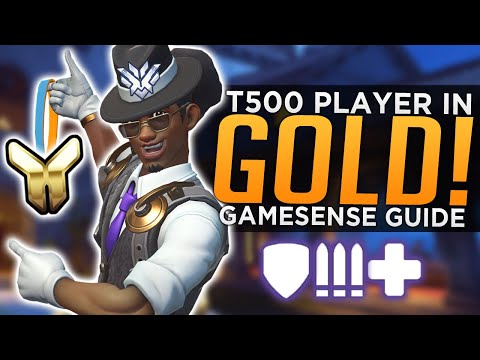 Good vid. GM smurfing gold gives advice on climbing. This section covers tanks.
Basically says that gold and below as Rein or Winston can feel useless due to their team dependency.

Around 20 minutes he suggests Zarya best when your team are just feeding, as you can potentially keep feeders alive, and they also power you up even if they do die.

Orisa is good, but again, she’s a barrier tank. If your team won’t work with you, you’re better off farming them as batteries to get 100% Zarya charge asap.

Edit, around 23.50 he’s talking about using Sigma to duel Reaper. Guess I need to learn him as well. Zarya, Sigma and Hammond for next season climb, or more fun games at least.

Yeah Zarya is the go to when my team is feeding + vs reaper, ball for attack, nepal, create chaos. Just had 2 brand new unranked dps vs 2 smurfs, quick Ls, very rng. Honestly, I should treat it like a diamond game but it’s different because there I have slight faith they have skill, gold they will throw you with brand new players, first time comp, insta rekt. It’s same for support, even after watching ML7 vids.

Tanks at a bit higher ranks are really fun, and at diamond and above, most games are a tank diff decider. Tanks, although not fun for a lot of people, are the most impactful role, short of dps smurfs at low ranks.

Can confirm, climbed 900 to 2700 with Zarya and i still have around a 60% wr on her. I havent watched the video before, but what this guy is saying about bubbling feeding teammates is 100% the strat, and i always do it. If my Rein charges in, I just bubble them and call in the comms for everyone to go in with our Rein, because lets face it, even at Plat a whole team doing literally any strategy together beats a team running full meta with no comms.

Was that solo queue or hard pocketed? Cause Zarya is one of the worst solo carry tanks at those bronze ranks. People get smart about not shooting zar bubbles long before they learn how to pingpong. There isn’t much dive bubble or coordinated cc to nope, and no one is gonna combo an ult with your grav. The fights rarely last long enough for sustained brawl aka charge. And with the other tank usually a dva getting 4k pogs or a hog with 13 environmental yoinks, I don’t see how there would be any pbsr for you. And don’t you have to solo solve bastions non stop?

The most impactful role with 2-3 fun heroes in the roster, isn’t really doing the 32+ hero design much justice, these many years later. And anything with “archetype” tank-like gameplay is a masochistic job, that few people bother to main, and even fewer bother to play without a lootbox or queue times bribe.

Sorry but my neurotransmitters just don’t light up for those anti-gamer design elements.

No sir. Making my own guide

The most impactful role with 2-3 fun heroes in the roster, isn’t really doing the 32+ hero design much justice, these many years later. And anything with “archetype” tank-like gameplay is a masochistic job, that few people bother to main, and even fewer bother to play without a lootbox or queue times bribe.

Sorry but my neurotransmitters just don’t light up for those anti-gamer design elements.

Will your guide including a chapter on how to have fun playing tank?

Its all gonna be about playing ball, aka having fun on tank, yes.

Something Yeatle didn’t show was doing tornados and I’ve gotten a ball ult in like 15 seconds from doing it.

Solo queue, i usually play support or dps when playing with friends. You’d be surprise what some light comms do at even low ranks. Bronze to silver I mostly played Orisa/Soldier so long ago it’s all a blur, then silver to gold was where the Zarya grind started. I didnt really play much Zarya while i was in bronze, it was primarily me playing Orisa and plopping down on the objective and hoping for the best. Even though I didnt play much Zarya in Bronze, I assume it would work fine, because i could carry in pow silver just fine with her. As for people not shooting bubbles, i just bubble either my mtank who is probably feeding or my flanking dps who is about to start feeding, or a frontlining Brig. The thing i learned about carrying as tank in low ranks, is that if you are just your average player trying to climb, you cant really just go Hog and Ball and carry. For your average person, it is best to enable your team to do stupid stuff by playing aggressive and yelling in comms to hold w. People need to give low sr dps at least some credit, most of them are high level players who know to ult a graved enemy team and are just low rank because they dont counterpick. And with general focus fire not really being a thing, fights last really long in low ranks, so building charge is the least of your worries. I guess dva would also be a good carry tank at low ranks because bomb is basically a guaranteed teamwipe in bronze, but you are stuck playing dva, who is pretty useless without a coordinated dive, and is a very tough hero to play, not to mention that after Bronze, no one really dies to dva ult anymore. Bastion is less of a problem than you would think, because even if the whole team plays around the bastion(which is rare), low ranked players dont know how to keep the hold, especially once one of your dps farms an ult, or if they are really that bad, you farm grav.

This is it for my memoirs of Zarya in low ranks.
Tldr: Zarya is good because she enables your team to be stupid with bubble and doesnt require a ton of skill to use effectively. Also, remember both teams are bad, so if you give your dps the opportunity to pop off, they will. Use comms to yell at the team to hold w harder and combo gravs.

Plus people underestimate the full POWAAA and get shreaded

Oh yes, the amount of times i got full power and just walked through the front line into the backline and shredded squishies and supports is too many to count. On a side note, it is also good for killing flankers. One more thing i forgot to mention is that you should probably secondary Hog because if your healers are trash(which happens sometimes, its okay, thats just life, the other team gets those kinds of players too!), then Zarya cant do much unless your other tank is really making space and keeping pressure off your healers. But in most cases you’ll want to switch to Hog if your healers are bad. Im a pretty bad Hog, but it saved about 50% of games for me, which is good considering i only switch to Hog when I know my healers are bad.