Should D.Va get a 20% damage reduction as a new passive for her Mech?

Should D.Va get a 20% damage reduction on her WHOLE mech?

Someone brought this up during the match when they said, “Genji is trash” i said. “At-least genji isn’t D.Va when she got 6 nerfs during Goats.” And then i said, “D.Va needs more armor and more damage.” They said, “D.Va needs a 20% damage reduction on her whole mech because she feeds the most ult charge in the entire game.”

I think that’d make her pretty monstrous unless it was an active ability that she had to knowingly activate, which would also have to keep her from using other actions. Her mobility is mostly what keeps her alive. She’s supposed to be relatively vulnerable otherwise since she has such a big health pool and so much armor and can instantly erase most sources of damage every few seconds.

But why though? D.va already has the defense matrix to prevent feeding, this kind of passive would only make sense on Roadhog since he can’t block damage.

That’d make her busted. She’s not weak enough to warrant that.

I think the best thing would be to fully revert her to her pre-GOATS state, which was the last time that she was viable and go from there. I think she needs her matrix range back in order for matrix to be reliable enough, but she has gotten so many buffs as the devs have tried to avoid reverting her to the point that she has similar overall matrix uptime to when she had her 4s matrix. I fear that if they keep throwing random buffs at her until something sticks she will just end up OP and nerfed back out of the game.

I also believe the devs need to stop giving nearly every new hero a way to bypass her matrix. The more stuff that can bypass matrix, the more shields become the only viable way of protecting yourself and allies.

what about she has 20% DR when Fusion Cannons are active. that way she doesnt have it when matrix is up or when using boosters

She really doesn’t feed that much ultimate charge, unless she’s just straight up face-tanking everything for some reason, in which case she’s around the same level as Ball and still significantly less feedy than Roadhog.

Anyway, damage reduction is used very sparingly, and for good reason. It combines with healing and armor in a way that tends to make characters almost entirely indestructible unless countered by Discord Orb.

“D.Va needs a 20% damage reduction on her whole mech because she feeds the most ult charge in the entire game.”

She ABSOLUTELY doesn’t feed the most, unless you’re a bot Dva who just boosts into red team every time you respawn.

It’s cute that people think Defense Matrix helps her in any way at staying alive.

She ABSOLUTELY doesn’t feed the most, unless you’re a bot Dva who just boosts into red team every time you respawn.

Eww, no. I’m just talking about the general player base. I’m like ranked… 28TH on the leader boards on overbuff on D.Va.

I was just saying a idea. But, i can agree. It’s kinda broken.

I was using “you’re” in the general catch all way, not suggesting you are personally.

Maybe I’m biased though, as a Sombra main I like Dva! Great dive teammate and EMPBomb combos never get old.

Maybe I’m biased though, as a Sombra main I like Dva! Great dive teammate and EMPBomb combos never get old.

That’d be overpowered. It would be 720 effective HP that gets healed to full in the same time as 600.

True, but I’d honestly rather farm Rein, Ball or Hog any day.

She’s pretty solid against Sombra overall, sure if she gets hacked out of position she’s dead; but a good Dva forces TL placement much further back, she’s the best at “Sombra checking” in game, best at busting Hacks, and a well timed Bomb is an underrated EMP counter.

How about instead, all Armor = 20% damage reduction.

And Tanks have 70% Ult charge resistance on all but the last 200HP. 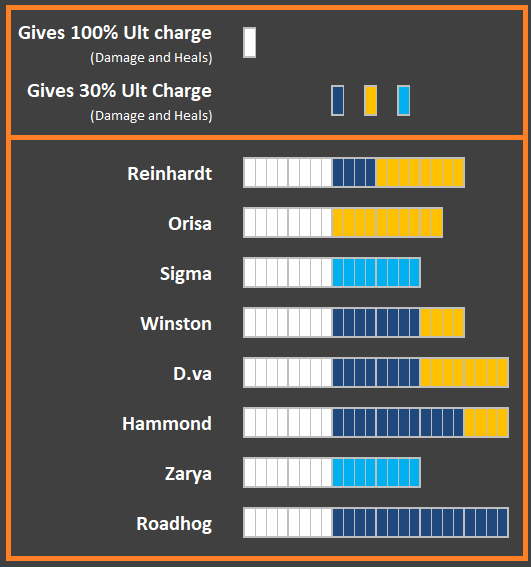 My experience playing her is that she really is that bad, and just doesn’t match up to the other tanks in terms of defensive capabilities, dueling, or pressure. I’ve had so many game that I start out on D.Va and my team gets rolled. I swap to Zarya or Sigma and despite the ult disadvantage, the game does a complete 180. I love D.Va, she is by far my most played hero, and I try to play her every chance I get. Ultimately, when it comes time to go for the win I almost always have to swap to Zarya or Sigma.

Ngl I miss her steadfast I bet thatd help her immensely

Personally I like the armor change more and I would explain why.

Tanks split or at least feel like they should be split by protectiong vs space making.
D.va’s job is making the engagement. she push in and make space for Winston/Hammond and the rest of the team to follow up. After that she finished her job, so all left is attacking.
I want to believe armor is enough to help her with survive ability but take in mind Winston and Hammond already provide enough protection for her so she just need a bit more defenses.
But for that she doesn’t need a special passive. just a bit more armor hp.
passive is a problematic thing a hero can only have 1 of it and D.va already got one…
So instead of putting another passive more armor should do the trick…
Besides, armor is more effective on spam which is mostly what D.va is good against so it makes sense.