I mean that’s fair enough dude. You make good points it’s a shame people feel the need to make ult account to save the hassle of toxic players hassling them into playing their mains when they would like to learn new hero’s. Good luck getting in to diamond on your ult. It’s been a nice non toxic pleasant discussion. Good day to you sir.

Didn’t Jeff Kaplan literally say not to do this as they have their own internal systems to detect this about a week ago?

We don’t actually need this behavior reported. We have a whole crew here doing some pretty significant analysis to determine this behavior.

Found it, he did.

Found it, he did.

Yet the witch hunt ensues regardless.

I do. I report the hell outta them. Especially the cocky ones which are most of them.

I love people reporting Sym mains, somehow they’re throwing but climbing at the same time, getting called a thrower when your winrate is above 60%.

But you know what’s funny, it’s that we’re used to that abusive behavior, many Sym mains get banned for no reasons.

I personally never been banned for playing Sym, reported yes but not banned, I do know that it’s a common problem for other Sym mains.

My winrate for Sym on this account is at 69% but call me a thrower.

It’s all a money game for Blizzard at this stage. So don’t expect something to be done about smurfs. Despite them ruining the game for others. Blizzard is obviously fine with that, they only need to give a pretence of caring about fair play. Don’t have to actually mean it.

Everytime I get a sym main in my team I have to play with 110% to try and win.
I don’t whine in chat or mic for them to switch, but I have to leave voice channel because of how toxic it gets when sym is around. And yes, I’m blaming sym players for this.

If the other 5 players doesn’t want to play with sym. Who is being selfish now?

And I’m just talking about old sym, the moment new sym went live on comp I stopped playing that mode. If old sym was trash, new sym is the most useless hero I’ve ever seen.

She is not just bad to have, she is annoying to play against. Not strong and scary, just annoying.

Setting at the end of map spamming right clicks and turrets.

I do this only if I’m fairly sure that they are playing at a rank they don’t belong in. I rarely do this as there are some matches where I’m just not too sure, when they have a private profile it makes it harder to be certain. I know they have a team, apparently, which can spot this behaviour. However I don’t have much faith in said team, I’ve seen plenty of bronze to GM runs appear to go unpunished.

Wait… wait… are you telling me that the level 7 account decimating your team on Doomfist isnt fun for you? Shenanigans!

well i already report them for that behavior … many times the smurfs even like to brag about it.

So we should stop play a hero that we love simply because people don’t like them ?

This problem is also a thing for Torb, Bastion, Mei and Reaper players.

The new Sym is so much better than the old one, I know it’s a selfish behavior but I do have a one trick account for her.

Always wondered how it would be to one trick her and try to climb, other Sym mains are very vocal with the toxicity they encounter so I wanted to see for myself.
It was after the rework, I played her since launch so I wanted to get good at the new Sym.

Surprisingly it was not the case, I did get flamed, people threw my games because of Sym sometimes but most of the time people were surprised that a Sym can carry them, got people adding me to compliment me for my Sym, at the end I got GM one tricking her with a 64% winrate.

All of this to say that outside the negativity around her she’s actually pretty good.
Proving to people that they’re wrong is such a nice feeling especially with a hated pick like Sym.

Give them a chance, they might be good and stop expecting that switching Sym will always make you win, like blaming a Sym when you lose first point makes no sense, who can full hold most of the time ?
Also you don’t need to always communicate with Sym, it’s good I agree but stop bashing Sym players to setup tp strat, the hero is more than a teleporter.

I do have some tp strats for some maps and I communicate with my team because I know they’re good strats but most of the time I’m silent and it works.
If people ask me for a tp I do it I don’t mind.

People can practice others heroes without getting banned.

So would you consider me Smurfing?

having an alt account which is 2100 and my main just managed this season to stay at 2600. Where I climbed to.

So am I not allowed anymore to play my Gold Account?

To be fair, the game put me several times into bronze where I wreckt everything, until I was back in mid gold.

Are you gonna report me for getting put into a Elo where I easily dominate?

I can understand if there are accounts like, last season: 4300 Genji main, Next season 2900 with a lot of time on junk, Torb, Ana etc. and then destroying as genji.

Getting the MMR/SR Lowered intentionally is wrong, just playing on a different Elo, bc of some reasons, I don’t think thats a issue.

IT starts when the player decides to lose to get lower games.

You’re a bit late mate I’ve already agreed with points made by others. 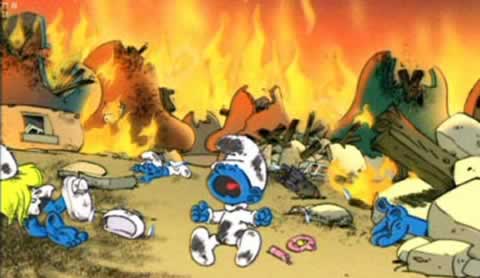 In other words, there are players who get an alt account to practice a different hero and eventually get the rank they deserve, so the fact they’re using an alt account doesn’t matter.

But there are also players who use various means to control their rank to stay low. Maybe they throw, maybe they just relax, maybe they team up with lower-ranked buddies to increase the chances that the team will be weaker. There are many ways.

“Half the time”. Not always. Just like there are smurfs who will mock you and be jerks about what they do, and there are those who won’t do anything like that.