Pink should only be for charity. I agree people should not be so upset other others having stuff because happiness should be shared, but at the same time no point attacking people unless they’re being blatantly toxic or something. A skin should never make someone “special” because the game is supposed to be based on skill. If you wanna feel special you should work hard to be good at the game instead. Why gate keep from people just because you want an illusion of being better?

That has nothing to do with my point though. I feel that any game-related skins should be made available. Those didn’t have Blizzcon logos for example. And its “couldn’t care less”. Basically you sound as if they still care. lol

Oh wow, they put up with a lot for not being compensated lol.

Pink should only be for charity.

I have maintained time and again, that they should do more charity events for BCAF, make a new pink skin for a qualifying hero, and offer a bundle during the charity to get an older skin.

Its a win-win but that’s me.

I like the idea of bringing back and making a new one. Double charity profit would be great. Do you agree that they didn’t really betray trust by using the words “limited time” though? I mean, they used it for annual events that are expected to come back each year.

Do you agree that they didn’t really betray trust by using the words “limited time” though?

Now, the problem here is interpretation. I read it to mean literally what it says. “Limited Time” That time could be once every year for example, since “events” are also called “Limited time events.”

I would have to say that yes I do agree.

With a combination of money and owl tokens, i got every single skin. You aren’t special anymore. Cry all you want, i have the skins forever.

Now, this is kinda the wrong attitude here. This is an example of why people don’t like exclusivity. People acting like this. You’re the equivalent of a child taunting another child with a toy that you have and they don’t.

I also have all the skins, been pretty diligent about collecting, but you don’t see me lording it over people either. That is not the right attitude my friend. You need to rethink your priorities.

Thank you! I know most people don’t care that much about the skins, but I actually cried about it about a year ago because the skin that I first saw as part of what pulled me into the game (the beautiful art style and dancing Mercy) was never reachable. I think another way we could solve this is if we bring it back every few years and increase the price after the initial release so that people who are so desperate like me can buy it while it also pleases others and still makes Blizzard money. I actually prepared 1000 tokens (from stream) just in case they did do that. I was surprised they didn’t, but I’m just happy they gave everyone a second chance.

I think it would not be unexclusive just because it came back rarely, because compared to event legendaries, it will always be more exclusive. (Most skins come back twice a year with the exception of anniversary.) So I don’t think it’s “not exclusive” anymore.

I actually have all the event challenge skins I wanted, but I wouldn’t mind if they bring it back too so people who want to express themselves can have it.

Which skin are you talking about here? Pink?

That particular skin in all honesty probably won’t return, unless there was a way to make it part of a new Charity event. But it was definitely a one-off special.

I was just thinking through what skins I have and actually I’m missing 3. 1 skin for Mercy believe it or not (the Gray League skin) and two contender set skins, Orisa and Ashe. I don’t have every single league skin for every hero, but I have all of them for Mercy, with the exception of those older than 2019. So missing some team skin colors too for her. I wasn’t going to buy ALL those skins, lord that would have been expensive… lol

Here is WyomingMist’s comprehensive list for League items: You can scroll down and they have arrows you can expand to see past skins that were awarded for watching contenders and stuff.

[image] Welcome to the Overwatch streaming rewards guide. This forum post will provide key facts about watching official esports and content creator streams to earn Overwatch in-game items including sprays, skins, Overwatch League tokens, and more! This guide will be updated periodically for active promotions and instructions on how to earn each reward. Important Announcements Overwatch League 2021 Playoffs and Grand Finals Rewards [image] PLAYOFF PERKS For every three hours watched during …

Atlantic. I don’t really care about pink as much personally besides its cause (and cosmetic wise, sounds/staff). For me, Atlantic was “always there” while I found out about pink after I played the game. I also don’t really like pink’s hairdo, rather plain wing light (unless ulting), lack of special make up, no earrings, and I don’t really like the gloves/nail polish either. That’s just a personal opinion on the design. I’ve always wanted the all-stars one though, but had pink been the one to come back instead, I wouldn’t complain either. I just wanted one of those, any one of those, and I want to donate to the charity in real life just because but I’m struggling to find a physical location for it. I have a personal reason for not wanting to use the website instead so please don’t judge me. I don’t want to objectify pink the way most people do as well, because it’s not just a skin but the charity aspect comes before it.

Atlantic is one of the most well designed skins in my opinion. I’ve actually circled the many things it has that no Mercy skin has that’s changed (like its wings has multiple colors, glow effect, staff glow effect, best earrings, a hair style closer to my real life one but also ironically the only Mercy skin with hair like that, and etc). I remember people getting upset because they thought the skin was not very detailed. In reality, I think besides missing sound effects and custom wing color when ulting, it is very detailed and more detailed than pink.

Atlantic is one of the most well designed skins in my opinion.

I find it very striking yes. I use it occasionally, the problem is it makes me a bigger target. LOL

More often than not, I’m running a League team skin that blends into the map better. I tend to choose skins based around the map I’m on quite often for my heroes for actual game play. But yeah, Atlantic is in my top 3 skin list.

I actually agree. I’m high diamond and widows up there hurt. They kept shooting me so I changed my skin to winged victory (my fav) in the second round. Somehow we won that but I don’t understand what we did to deserve it. They were rolling us for a large amount of the game. I feel like the glow makes you more visible in the dark even though my master widow friend doesn’t think so. On some maps that are darker though, I think it does to some degree.

I sent you a friend request on battle net if you don’t mind. I think you’re a cool person! Up to you if you want to accept.

Here is a video of the end of an era: 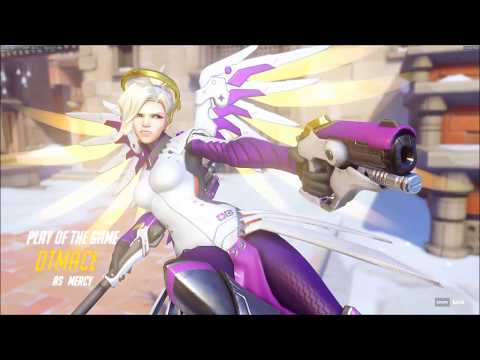 Yeah, I made this from LOTS of game clips. Plus somewhere in the middle is a 6v6 all Mercy battle with friends. Enjoy!

Never saw this. I’m not sure if I would have been happier experiencing it though. Maybe I would be upset to see her get nerfed but I was actually here when Mercy only flew during ult. Do you miss it?

Well, to be fair, it was annoying to fight a team, kill 3 or 4 of them, then have them all standing in front of you again fresh while you are licking your woulds from the fight still. So…

Not to mention it made Mercy one of the most hunted and hated heroes in the game for Comp. And the most picked. It bred toxicity too, which didn’t help.

Miss it? Sometimes. But I like where she is now. Mobile, lots of movement tech, versatile. Not really a main healer any more, but an enabler.

Back when her Valk would really increase her movement rate and fly faster, she still had unlimited ammo in her pistol, and could tempo rez. At that time you went through two iterations:

First version allowed you to rez a player, Valk, immediately rez another, then you had the potential (depending on timing) to rez up to 2 maybe 3 more players before your ult ended. IF you could time it. (during the ult you had 10 second cool-down instead of the normal 30 seconds between rezzes)

Second version changed it so you could rez, ult then rez a second. But even that was too strong, so they changed the ability to 30 second cool down no matter what and also slowed down her flight speed. She still goes faster in Valk, but not as fast as she used to. Not to mention her super jump was the result of a bug around this time, so that they left in and corrected a bit so it was consistent.

I think you will think I’m weird, but I have 1000 hours on her because she’s so perfect in every way. I only play other heroes for my team or because I’m bored.

I think you will think I’m weird

Why would you think that?

Mercy is my top played character. Not a 1000 hours top, but between my 3 accounts, pretty close. But I do a lot of tanking lately. And I main Sym for a DPS role.

I mostly play heal or tank as I prefer to wait less in the queue. lol And since the time of that video, I rarely play vs Ai anymore. Most of my time is spent in QP RQ. But I have one account that I play only Comp on. Not Diamond level though. LOL

Here you might get a kick out of this, its set to a very old comedy song that I literally saved from a cassette tape several years ago. But it works, since D.Va has a lot of rabbits in her themes… LOL 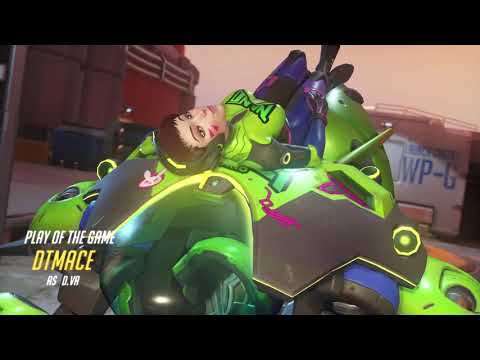 Why do people feel the need to be special? It is just skins, let us use this worthless currency that just builds because of all the dupes.]

This is how OW will end up being monetized, its just how the industry is now. Only -some- skins will remain exclusive thankfully I own all of those.

I totally agree with OP

So what? You made the choice to spend your money on a cosmetic item. big deal.

Since when were any of the current skins that they re-released “exclusive” ?