OWL Countdown Cup - BOS vs FLA, ATL vs DAL, VAN vs WAS

Please be respectful of this thread

This thread is ONLY intended for the discussion of today’s broadcast and matches being played. If you wish to discuss the ongoing Activision Blizzard Lawsuit including the recent sponsorship withdrawals from the Overwatch League, please do so in a different thread. Details of how the lawsuit is impacting the Overwatch League can be found here:

Sigh Hello…again. As some of us have probably found out by now, we have learned that the Overwatch League is having trouble gaining new sponsors, and the sponsors it does have…well, they are either revisiting their partnership or, at the very least, want a meeting. However, in typical OW forum fashion, the anti-OWL and pro-OWL crowd have completely misrepresented the facts and potential impacts of OWL business sponsors reassessing their partnership…which means your humble servant (myself) is le…

Thank you for your cooperation.

If I have done my calculations correct, Florida Mayhem is now looking at their last shot to get into the post-season. They must win their game today in order to maintain any hopes of getting into the season Play-ins (this assumes they make it into the Countdown Cup). Vancouver Titans is eliminated.

What is this music…its amazing

Final party of Week 2, and I am here for it. Just had some free breadsticks at Fazoli’s (unfortunately, couldn’t take advantage of Titans Pizza Hut cos I’m not Canadian and don’t live near a Pizza Hut).

As for the matches at hand, my predictions are Florida 3-2 over Boston, Atlanta 3-2 over Dallas, and Vancouver 3-0 over Washington.

What is this music…its amazing

A lot of the tracks (including the one you heard) are an assortment of licensed stock music from the Red Bull Records music label.

And the Florida Mayhem take the victory and snap their losing streak!

The Mayhem goes 1-1 on the week with a -1 map differential, and now need a good week next week to claim their spot in the Countdown Cup Knockouts.

As for the Uprising, they are all but eliminated from the Countdown Cup, and now have to hope the Mayhem don’t steal their spot in the play-ins.

Now, we’re on to arguably the main event…it’s the Atlanta Reign taking on the Dallas Fuel. Who’s going to come out on top in this one? Only one way to find out. Let’s dance!

Turn up the heat.

Can someone please confirm if 4:26 time bank is a new Rialto record? Come one DALLAS!!!
Come back into to the game like the Avatar against the Phoenix King!

And the Atlanta Reign’s hopes of getting Top 3 just got that much more likely, despite an egregious Charlie Niner

The Reign get a mostly clean 4-0 qualifier stage and qualify for the Countdown Cup Knockouts! They also stay in the Top 3 in the West playoff standings for yet another week!

For the Fuel, I’m afraid, they finish with a 2-2 record and an even map differential, which means they’ll have to wait and see if it will be good enough for the Countdown Cup Knockouts.

Now, it’s time for the early bird version of The Toilet Bowl…it’s Vancouver Titans and Washington Justice. Will the Titans prove that yesterday was not a fluke (and send Reinforce into the 6th stage of grief)? Or will the Justice right the ship? We’re about to find out. Let’s get the house rocking, ladies and gents!

I may be fierce during play, but it boils down to a game.
I appreciate all the teams efforts in the OWL.
I love the game.

When it came down to a Tracer 1v1 I was like…

Reinforce’s reaction to this match up is hilarious.

Washington always seem to find ways to trip over themselves this season.

I predict a Titan’s victory with possibly of more breadsticks if they are offering them.

Double Pulse Bomb unlocked… if the Titans get a piledriver kill on Nepal, breadsticks are unlocked again. 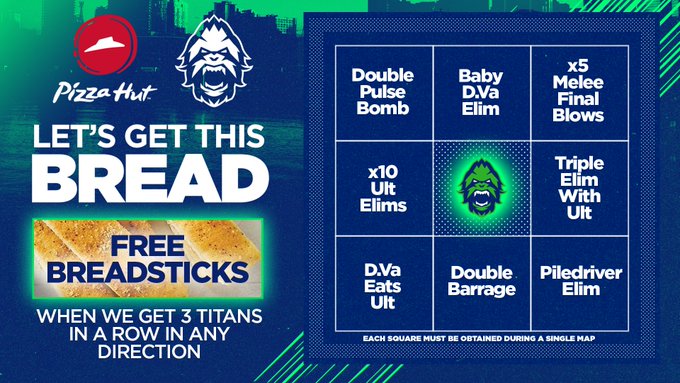 SURELY THEY CAN MANAGE THAT!!

Too late, the bingo board resets every map. (Casters tend to forget that)