Goodman’s last atrocious CC increase. Hopefully this slope isn’t the slippery kind and it stops there.

He went out in a blaze of glory

Honestly there is such a Varity of DPS heroes.

Just switching with Ult charge should be the DPS Passive.

we didn’t know her

More info before release good to build up hype.

Right but I’m kinda worried if “This is all the Support changes we’re going to get on October 4th”.

Like if this was just for OWL Grand Finals to have a patch that doesn’t rock the boat much, great. Lock that in, then wild go from there.

But I was kinda expecting them to error on the side of “Giving Supports too much”, then scale back from there a few weeks after launch. 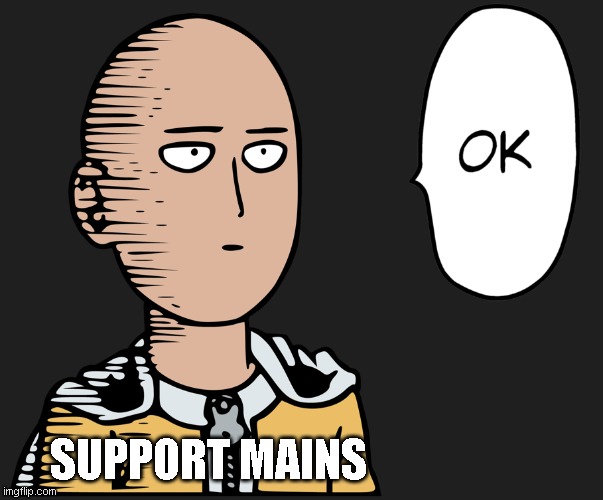 Like, what do the devs have planned to really “Wow” Support mains, besides Kiriko?

What are they bringing to the table that makes Support as enjoyable to play as DPS/Tank.

Most notably, how are they going to make Mercy mains happy. Since I don’t see a world where they reach a desirable queue time, without doing that.

As a bare minimum, are they going to make it so that there’s an Option Menu choice between GAJump and SuperJump. Since you know that’s going to be controversial. Also we haven’t heard anything about if they are gonna scrap the GAJump meter thing, or make it reset to full whenever a player touches the ground or is near a teammate.

And that’s just a raw mandatory minimum to avoid a controversy about it.

Sym was the teleport support.

Now we have Kiriko, the Teleport Healing Support Sym could never be.

Still nothing for Moira…? Are they just giving up?

Of the supports I played during the beta I felt I had fewer issues with Brig and Moira due to their high survivability. And I was already fond of their gameplay patterns.

What are you looking to see changed?

Sym was the teleport support.

Now we have Kiriko, the Teleport Healing Support Sym could never be.

It’s like Nightcrawler vs Blink.
Low scale and quick vs slower and in bulk
Both are good, but have different use cases.

Most notably, how are they going to make Mercy mains happy

I have a crazy idea: Stop dumbing down the hero.

Okay I think this will be the final balancing on Oct. 4th. Last beta Build + this Patch. Sadly no Ana Nerf.

…That doesn’t make sense to me in gaming terms.

Mostly because “emotions” are limitations to the X Men.

In comparison to video game characters. (Which just have cooldowns)

Most notably, how are they going to make Mercy mains happy

I have a crazy idea: Stop dumbing down the hero.

Well, here’s the best I can come up with.

It turns the cast of Valkyrie into kind of a “Pre-Emptive Mass Rez”. While also offering another Cleanse hero that isn’t named Kiriko, that existing in the original hero cast.

And generally just puts her further into that middle-ground they have her in, where she doesn’t do enough bulk healing to be a “main healer”. But she doesn’t have a big defensive Ult to be a typical “off healer”. 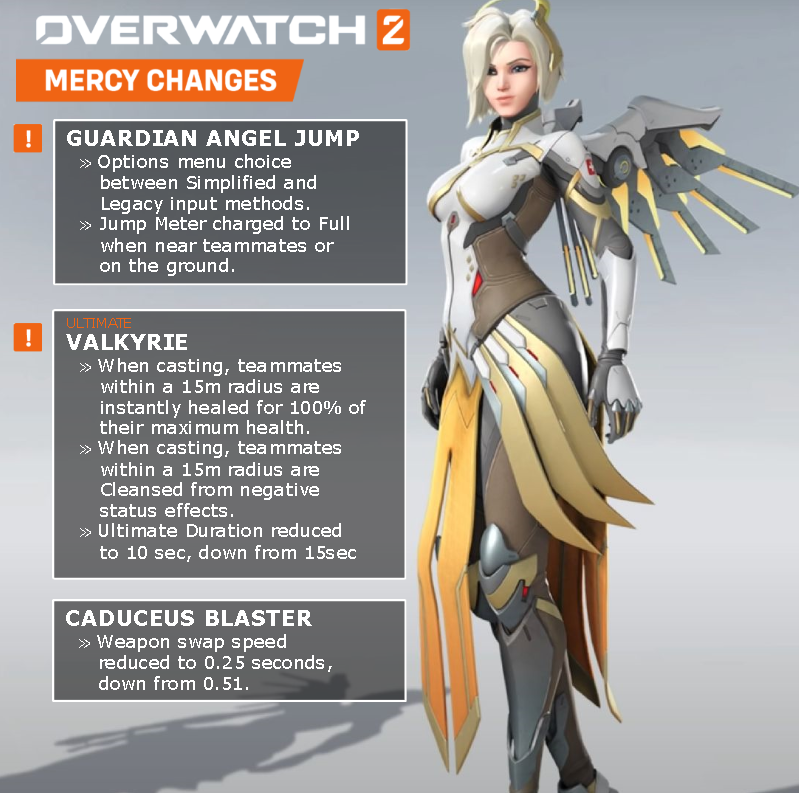 And yeah, has that optional choice between GAJump and SuperJump.

25% faster move/reload speed after an elim

Genji mains confirmed to be only DPS players in the internal testing pool.

Honestly there is such a Varity of DPS heroes.

Just switching with Ult charge should be the DPS Passive.

This could lead to easy exploit, especially for Escort during Overtime for the defenders. Every DPS just has to switch to Mei or Junkrat (while having a full 100% ult) to stop the payload.

But I guess I wouldn’t mind the Escort mode being less boring in 5v5 (and shorter, with less Overtime), so why not :p…

They gave her a brand new ability then scrapped it. Seems like Blizzard themselves want her changed.

I was just hoping it would happen at launch, rather than months later. This is supposed to be a new game, after all.

Sweet. I’m really into these changes, actually. The only one I’m a little skeptical on but willing to eat my own words on is the new DPS passive. I just see heroes like Tracer and Genji becoming more insufferable with it, but we’ll see how it translates.

Really happy Orisa and D.Va got some love, as well as Bastion and Sombra.

And yeah, has that optional choice between GAJump and SuperJump

No. Optional is not optional when one offers the same value for less effort.

Not a Mercy main, so what ever happens, or whatever these changes mean…

I hope they are terrible, so I can farm you as Kiriko.

JK. Wish you have fun.