There are hero balance changes, but typically when there is some level of rework for that balance change. For example the recent balance change for Tracer could not be duplicated on the Experimental Card in the old patch.

However to get on your speculation, I know there are still some minor “quality of life” updates for the Career Profile still promised to us such as the ability to sort player icons. This next patch will very likely be the major patch for the Anniversary event, which we almost always get a new “toy” to play with to some extent (though sadly last year, we didn’t get anything too new).

I thought that was coming to Overwatch 2. Is it really coming sooner rather than later? Not that it matters once I get the open queue icon. No need to ever organize them again. It would have been convenient years ago, though.

How high are you in open Q?

I thought that was coming to Overwatch 2. Is it really coming sooner rather than later?

Yes, to be specific, there are MAJOR updates to the Career Profile coming for Overwatch 2. However according to this Developer Video Update, Jeff mentions sorting player icons will come to Overwatch before the major OW2 release.

I am 2900 at the moment. It has been a climb, because for some reason it placed me in mid gold and then I went on a loss streak. Took me way longer than I expected to get stabilized.

So how are you keeping keen on all this stuff?

I’m like all kinda meh about overwatch right now.

So how are you keeping keen on all this stuff?

[image] OVERWATCH DEVELOPER POST ARCHIVES This is a categorized archive of all relevant Communication from Blizzard Entertainment regarding Overwatch. This includes all relevant forum posts from the Overwatch Development Team, community managers, and customer service representatives from both the new forums and the old forums. This also includes any relevant Reddit posts, Developer Update Videos, News Articles, Technical Support Articles, Third-Party Interviews, etc. Basically, anything that i…

Overwatch is still a fun game to me, and call me somewhat spoiled, I do have a strong relationship with many of Blizzard’s representatives including some of the development team. Granted, I have virtually no insider information, but this game is something that I really special to me. Hell have you seen my room?

Not enough Overwatch merch. I thought you were more hardcore, but I am getting casual vibes from this.

Not enough Overwatch merch. I thought you were more hardcore,

Will this prove my hardcoreness? 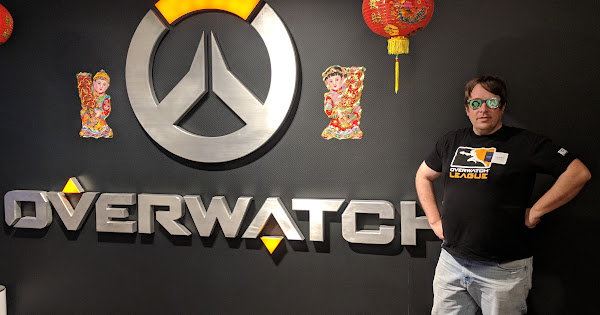 I have a couple of Mei tee-shirts, and a few alts, 1000 hours of play and that is about it.

Oh, and an overwatch wallpaper on my work desktop.

But your room is something else :).

I have a McCree funko and an art book… so I feel pretty lame comparatively.

Is this where they unveil their april’s fools and bring in support Echo instead of the DPS version?

I have a McCree funko and an art book… so I feel pretty lame comparatively.

Well, from my perspective being a true fan is not about collecting all of the cool toys and collectibles, but using Overwatch to inspire you and make our world a better place. I kinda do that here being a Forum MVP, but if it was not for the inspiration behind Overwatch, I would never have returned to school and pursue my degree in Graphic Design.

I did not do anything productive because of Overwatch, but it helped make me a better person. That is more than most games have ever done for me.

Do you think we could be seeing any OW2 news at the anniversary ?

I’m hoping for them to show off a few more of the hero skin redesigns (since we know some of them are already finished.)

Do you think we could be seeing any OW2 news at the anniversary ?

News, yes I am hopeful about that. Based on purely outside rumors, there is strong indication of a 2020 Holiday release date. So assuming there is any sort of a Alpha/Beta cycle, I am thinking we will see major updates for Overwatch 2 this may. However this is purely speculation.

Let’s have our fingers crossed. I’ll be honest when they said they were “going dark” after blizzcon, I didn’t expect it to last 6 months of virtually no new info on the game.

If you look at overwatch 1’s original lead up, 6 new heroes were announced throughout the year of 2015 and an addition 3 at blizzcon. In contrast, ow2 has had no official developer updates since the blizzcon announcement.

There is always the suspicion that we will get no new info until blizzcon 2020 but I don’t see why they would want to wait that long.

Anniversary is the best bet for some news but if we don’t get anything then, I would presume they are holding out until blizzcon.

I’ll be honest when they said they were “going dark” after blizzcon, I didn’t expect it to last 6 months of virtually no new info on the game.

Do you expect for Blizzard to clarify how far into development they are with OW2 ? My issue with the game is I don’t know if it is 6 months away from being finish or a year away. How should I manage my expectations?

I hope we get more communication about OW2’s development and when to expect the game.

Also, do you think it is possible that blizzard will do an ARG to build up hype for overwatch 2’s release?

I don’t have any formal expecations. Right now I think it is purely fair to say they may tease something during the Anniversary event. Now how much or what will be revealed, I don’t know. Also, don’t be disappointed if there are delays. With the pandemic going on, most of Blizzard is operating from home and that is causing delays.