Something else by Not Muda was posted by the way.

Well this looks really dire for characters who rely on Armor to be a mitigation tool and drives Brigitte to a more useless spot than ever before.

It’s rather clear now that you Devs don’t like Brigitte or you wouldn’t have been so hasty and incisive with her nerfing compared to Dive being untouched for a year or 2. What plans do you have for her? Did you realize yet that the main issue of Brigitte was that both Pharah and Junkrat are not valuable enough overall to make their presence relevant? Are you insisting on nerfing Brigitte directly and indirectly? Isn’t at this point better to put her on an “Urgent Rework” tab instead of having a character simply being useless?

Goodman has no place in Blizzard with these horrible balancing decisions. Fire him. Hots was better off without him.

Do you have a source for him working on HOTS balance significantly?

I’ve seen it over and over and might have posted it once or twice myself but, I did a further look a couple days back and he does not seem to have been a significant part of HOTS from what I can dig up.

The people that play HOTS don’t seem to have heard of him.

Edit: It appears he was involved with Arthas on HOTS

She is not the best off-tank. D. Va is by a long shot.

Zarya’s been statistically the best off-tank for over half a year now.

Do you have a source for him working on HOTS balance significantly?

I’ve seen it over and over and might have posted it once or twice myself but, I did a further look a couple days back and he does not seem to have been a significant part of HOTS from what I can dig up.

The people that play HOTS don’t seem to have heard of him.

Huge HotS player here. There was a minor pro team literally named “Please buff Arthas” as a meme because Arthas was nerfed to be so laughably bad that… It was a meme. Don’t like to name names but it’s largely attributed to him.
https://liquipedia.net/heroes/Please_Buff_Arthas

Darth, she does not even come close to D. Va. D. Va has been meta ever since season 3 after her rework, before then she was the most useless character. She apart of the long meta, Dive. Zarya would have never been pick during dive. She was is also now apart of GOATS. She been in every single meta and has not been kicked out. So far D. Va has been played in meta for 20+ months, while Zarya has only 10-14 months.

D.Va has been in three metas, only one of which she was part of the starting lineup: GOATS. She wasn’t a necessary player of two of these comps–triple tank (before she was buffed) and GOATS–either. People say “every single meta” and forget we have only had, like, three major ones and two minor ones. All three of the major ones almost necessitated her role regardless of whether or not she was OP: triple tank had three tanks and two had to be off-tanks. There are only three off-tanks so of course she got a spot quite often. Dive was dive. D.Va is the only off-tank built for it and she replaced the original dive off-tank, Zarya. Zarya can work with Winston, but not to the same level as D.Va and especially not without a Lucio to speed boost her. GOATS, again, traditionally requires two off-tanks outside of variations. D.Va and Zarya are the only two viable off-tanks. So of course they’re both picked. However, with GOATS, D.Va is one of the nonessentials. She can be swapped with Mei or Sombra or another character, whereas GOATS is not GOATS without Zarya, Lucio, and Brigitte.

Zarya has had a higher:
-pickrate
-winrate
-damage done
-damage blocked
-Obj kills
than D.Va for over six months now.
Furthermore, Zarya has less deaths than D.Va’s mech has.
She is statistically better, regardless of duration in meta, and has been. She also has the best ult in the game and is enjoying two buffs

Waiting for someone from youtube to talk about this

Yeah, the whole not being allowed to name approach really does a surprisingly good at covering stuff up.

Even knowing to look specifically at Arthas I’m getting surprising few results.

I wasn’t around at the time. It’s just what I picked up from hanging around the HotS community for a couple years.

So you admit that she is most played. Cool.

Please, as the very least fix the targeting. On Lijiang Tower: Gardens try targeting the upper widow when coming from spawn. It jumps back and forth between window and the walkway. This map is the worst example, but it happens in other places of the game as well. Symmetra’s teleporter does the same thing, likely because it shares the same targeting tech.

That has nothing to do with any part of the original argument. 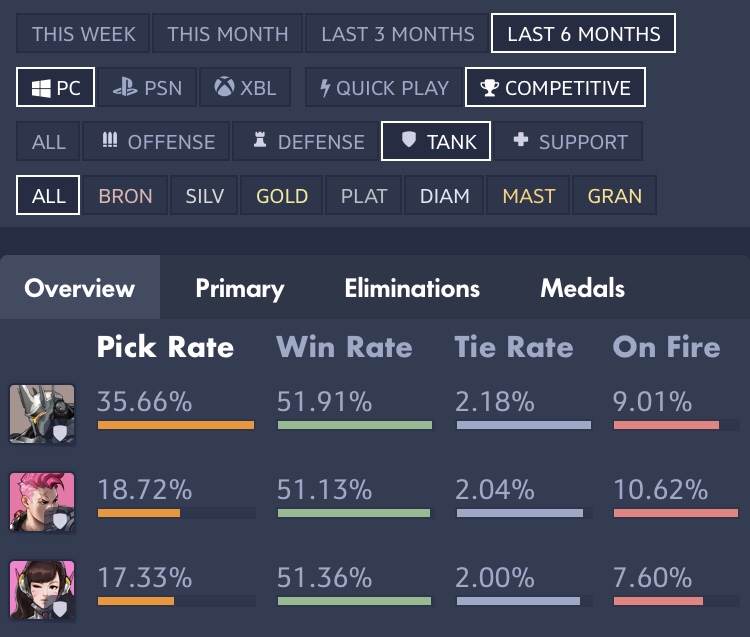 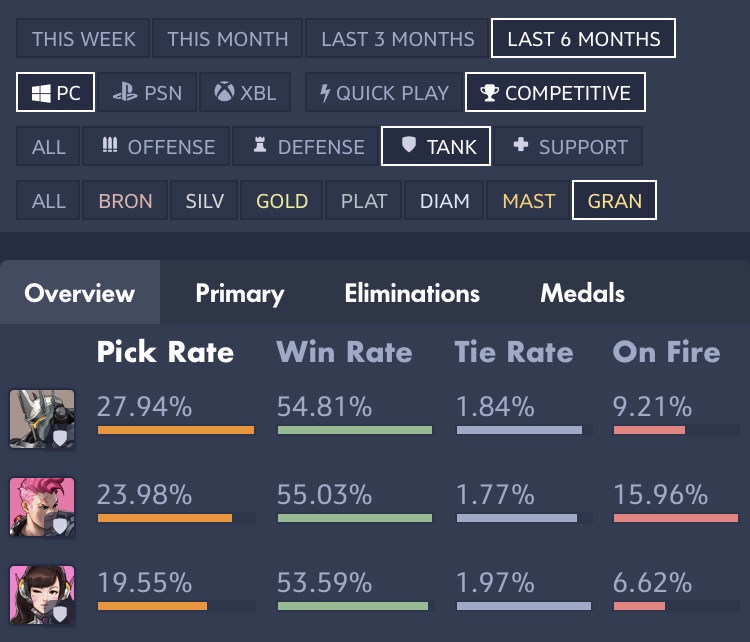 also, something I missed:

Zarya would have never been pick during dive.

She was the original dive off-tank.

I know you guys hate YO

I don’t hate YourOverwatch. And I feel like people who hate YouTubers around here just do it because they’re YouTubers and that’s some sort of crime.

The amount of hidden profiles and guesswork that Overbuff does is not reliable.

Well it’s almost noon now, and I type “Overwatch Goodman” into the search bar, shorten down to just today.

And I think the only one talking about it… is in French… (Literally nothing else.)

Overbuff is statistically reliable, as far as we know. It still has a sample size in at least the hundred-thousands across all ranks, which provides approximately 99.9% accuracy.