Bastion should be loved more!

As someone who played the first few seasons as bastion and i completely love his character and his kit, in a way.

But he’s been dead in comp for months, hell almost years…

his pickrates are terrible, in every single rank… even in ranks like bronze and silver where he is supposedly “op” as my silver friends call him

His pickrates have gone down and down constantly, and in competetive play, he is the lowest pick rate hero.

Two different statistics for pickrate, last weeks % and the time over 6 months %

As you see in most of the ranks, its gone down from the past total of 6 months, and just the last week of competetive play… which is upsetting to see

Bastion really needs a buff, or he needs a rework. He’s been dead for so long in comp, i cant even remember when i last saw him, outside of pirate ship in junkertown.

Why are so many people complaining on the forums about Mercy, when the most lovable robot, gets absolutely no love. Bastion deserves more!

Don`t worry i still love him.

I’m completely against reworks waste of resources that could be developing content, but I would like to see buffs to him.

Bastion may be weak on his own but pair him with Orisa and Mercy and he will make your life hell.

On behalf of Pharah, who wrote this post but is not trust level 3 and cannot post links, but this issue has dragged out for over a year and a 1/3rd, and it means a lot to a small playerbase that still tries to play Bastion, in his current, unfortunate form. Yes, I, Pharah, wrote this post however this will be my last one. I have cried out loudly and if this thread doesn’t get through, then it proves my title correct: Bastion is being ignored. Too many great people have supported Bastion and hav…

Watch kolorblind play bastion. It’s inspiring. I like bastion as a pick when enemy team is running 2 shields. He vaporizes Winston.

well we do love the pirate ship…maybe sentry should actually move slowly.
Start from-very very slow, and buff until it feels balanced 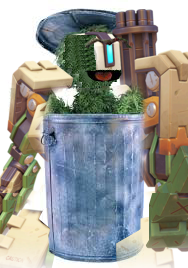 The mercy mains have thousands of threads, we Bastion mains have but one, but it is a freaking big one.

He just needs more consistent damage… His spread is far too high for a hero that can’t move to close the distance between himself and the enemy… He’s got flanker level spread, but he’s stationary, which is the main flaw in his kit (not being stationary, having a spread that doesn’t work with that). Heck, I’m fine with roughly keeping his (intended) DPS, just make it feel better to use…

He’s only really a cheese hero because of Ironclad… That’s why most Bastion mains want to get rid of it (or at least re-purpose it). I personally would like to see something like this, where Ironclad is tied to repair, and it gives bonus armor like Torb’s armor, but only Bastion can apply it.

Mercy mains had one before, then Blizzard kept locking it and now they’re making a new thread every 5 minuets out of frustration.

I would argue that that thread was made by Blizzard, not Mercy mains. Either way, we will pass it in due time.

But still, theres so many mercy posts nowadays…

They have 1 MEGA THREAD too , they are equal

Id rather he stay with low pickrate

Buff him but dont increase his pickrate

more than a year and a half actually. Unless you count from launch and then it’s almost 3 years.

Bastion may be weak on his own but pair him with Orisa and Mercy and he will make your life hell.

But that’s not Bastion that’s Orisa and Mercy. Why do you think a hero is balanced when 2 other heroes have to babysit him? That’s taking 2 heroes out of the fight to make him work at all.

They can 3v6 almost every other team comp.