By the devs' own logic, Sym needs a rework

TLDR WILL BE AT THE END

Yesterday, SVB and ml7 had an interview with developers Geoff Goodman and Josh Noh.

In the below clip (timestamped at 49:56), Geoff says they reworked Bastion because they couldn’t buff him due to people not liking to play against him. He also mentioned that people not wanting to play the hero also led to his rework. 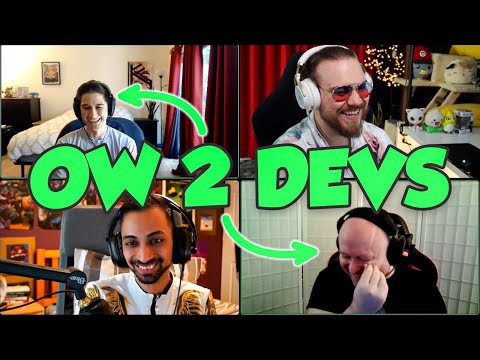 Symmetra is not only one of the least liked heroes to play, but she’s also infamous for being one of the most hated heroes to play against. If the above reasons are enough to warrant a Bastion rework, why not also rework Symmetra? They’re in similar positions in Overwatch 1.

Also in the most recent blog post (here), the devs say this about Symmetra:

“She consistently has one of the highest win rates in both the beta and live game because people tend to play Symmetra in situations where she is more likely to win, like defending the first point of a map. Players who utilize Symmetra are also more likely to swap off her very quickly when they suspect they may lose the game, further pushing her win rate in a positive direction.”

This was the reasoning behind her last two reworks. She is in the same position she has always been in - highly niche and only enjoyed by a tiny minority of players. Again I ask, if this warranted the last two reworks, why would this not warrant a third? Only this time, I believe she’d need a complete overhaul (or we’d just be in the exact same position we have been for 6 years).

Give Symmetra the same treatment Bastion has gotten. She deserves it.

The devs couldn’t buff Bastion because nobody likes to play against him. So they reworked him. Symmetra has the same problem, this meaning I believe she deserves a rework as well. A developer blogpost describes Symmetra as highly niche, which was the reasoning for her last two reworks. Surely this warrants a third, seeing as there hasn’t been much objective improvement?

Maybe. I’ve grown accustomed to 3.0. But at the same time I’ll play her no matter what they do to her.

I think she can probably work with her current kit with buffs and small reworks.

A total rework I’m worried about it also being bad lol.

Whatever the changes to her are going to be I hope they leave her in a good place that will finally put an end to reworking her. I think that’s the most important part to me.

They should just give Sym an AK-47 and call it a day.

I want a new Symmetra, this one isn’t fun in the context of OW2. It feels even more polarising when in OW1 you could make her work on any map because of the second tank and more defenses but in OW2 you can only play her where she is good or else you are going to lose pretty much because her kit isn’t enabled enough by the map geometry to even be passable

With how big the new maps are I can’t imagine them keeping her the same. Like the push maps are huge.

not liking to play against

So that’s why they nerfed sombra

He also mentioned that people not wanting to play the hero also led to his rework.

I think he’ll find that it isn’t a matter of “people not wanting to play the hero”. It’s a matter of he’s either insanely broken in lower ranks, or a throw pick in ranks higher than gold unless you’re Bastionmain. Noone is going to play a hero that is so bad that they are actively throwing the entire time playing them just for existing. It’s the same reason Mei mains didn’t want to play Mei in OW2.

I played Mei in OW2 and found she was a lot stronger…100DPS piercing primary fire was strong. Perhaps needs a small range increase now it doesn’t have CC though

It is not out of the question that Sym will get a rework. Her defensive playstyle is just lacking.

She is objectively weaker. Removing her utility while giving her a worse version of Syms left click and then literally nerfing every other aspect of her kit does not make a niche hero good.

It’s not, it’s a worse version of Sym’s left click. Slow projectile with worse range making it significantly harder to hit. Alongside the fact Syms charges over time means Sym and Mei shooting a 200hp target, if they hit every tick (which is alot harder to do on Mei due to the fact she isn’t hitscan), Mei killed 1/10th of a second faster. And after Sym secures a kill she is then doing more damage than Mei while still having more range AND being hitscan. If the enemy is getting literally any heals at all it completely negates the left click, including Zen orb.
The only benefit was peircing which was useless since everyone was alot more spaced out due to there being 1 less enemy on the field and the insane amount of hyper mobility found.

Except Sym starts at 60dps and has to work her way up, whilst Mei gets a flat 100DPS and can pierce enemies. Attacking two enemies, for example, is immediately 200DPS which is higher than Sym’s max DPS after charging her beam for 3 seconds.

But I agree that not enough was done to Mei to compensate for the utility loss.

They did rework Sym. Dozens of times. I think at this point they’re not going to touch her because they’ve given up on trying to make her work.

The main issue is the deployables which don’t fit the fast pased game they want. Torb’s viability increased when he wasn’t tied down to his turret, his turret is now an additional ability rather then most of his kit.

Not sure if they are talking about heroes being ‘hated’ from a pro perspective or average player one, they always only seem to listen to pros, guess those koreans really hate both heroes. So expect nerfs. shrug

In my experience, the only folks who complain about playing against Symmetra are low skill one-trick Genjis and Tracers who repeatedly dive straight into the range of her Sentry Turrets then complain that their usual scrub tactics don’t work against here.

Practically everyone else agrees that she needs a Rework, but not because she’s unfun to play against. It’s typically because she doesn’t work especially well as Damage Hero in her current state because her Kit is too situational so she’s really only good on a few maps like Lijang Tower, Volskaya Industries, and Hanamura. Buffs won’t help either, so a rework is the only viable solution.

The rest typically just miss when she was a Support Hero and would like to see her reworked as a more traditional Support with Healing capabilities.
Personally, I would like to see her reworked into a Healer without them completely gutting her Kit, as I like her unique abilities and don’t want to see them replaced by more generic abilities.
I’d like to see her reworked into something along the lines of a hybrid DPS/Support sort of like how Brigitte is a hybrid Support/Tank. In other words, don’t subtract, add. Give her some AoE Healing abilities tied to the damage output her Turrets/Photon Projector. (Yeah, I know some of you disagree, and think that won’t be viable, dually noted, I don’t care.)

I just hope they don’t go the band-aid route (and I’m really afraid they’ll do exactly that next beta) and drag out this limbo she’s in anymore than necessary. 6 years of suffering is more than long enough.

Tweaks aren’t going to cut it, they need to hunker down and give her a proper, well-designed, widely viable, and polished rework. And I’m personally team Support, but a full overhaul is just as (if not more) necessary even if she’s staying DPS.

Mei lost zero utility, the primary fire is a trap in OW1, the only time you are freezing someone is if the fight is already over.

Again I ask, if this warranted the last two reworks, why would this not warrant a third?

Every time they try to change Symmetra to make her more broadly useful/appealing, her three mains come out and complain as loudly as a mob ten thousand strong.

Symmetra’s current niche as a shield cracker is good for OW1, but in OW2 she’s going to struggle a lot with her criminally short range, low mobility, and low uptime on her utility skills. She definitely needs a rework, but the amount of effort going into making Symmetra good in a faster paced environment is basically making a whole new hero–Bastion didn’t need New Hero levels of adjustment.

she’s also infamous for being one of the most hated heroes to play against.

I’m not really sure that’s true? Bastion sucked to fight against because you either play heroes that beat him and win for free, or you lose. Symmetra doesn’t really have that factor.

Not to disagree that Sym needs a rework, but I think it’s more about the fact that she’s extremely map dependent.

the primary fire is a trap in OW1

Kind of. It’s a trap in two ways. As a Mei player, you don’t want to be relying on primary fire since it’s so subpar in range and isn’t that good in terms of TTK. However, the threat of freeze really changes how people play into her, since if you do get frozen, you are likely dead.

With that off the table in OW2, and slows meaning nothing for basically anyone other than Zen and Ana, people have been aggro’ing hard into Meis and just gunning her down since her effective TTK – even with the “buffed” damage – is even worse, and doesn’t compare to that of any other DPS hero outside of a L1 beam Sym.

We’ll see how it plays out further next beta, and hopefully we’ll get a competitive mode and better matchmaking so we’ll have a bit more representative player behavior. However, I don’t see that changing since the numbers and mechanics don’t discourage the behavior.