Is there even a good choice in that situation?

So we’re on Sky Temple, the whole team is bot lane. The objective is in 30 seconds and will be bot and top. We see that the enemy team is coming bot lane. 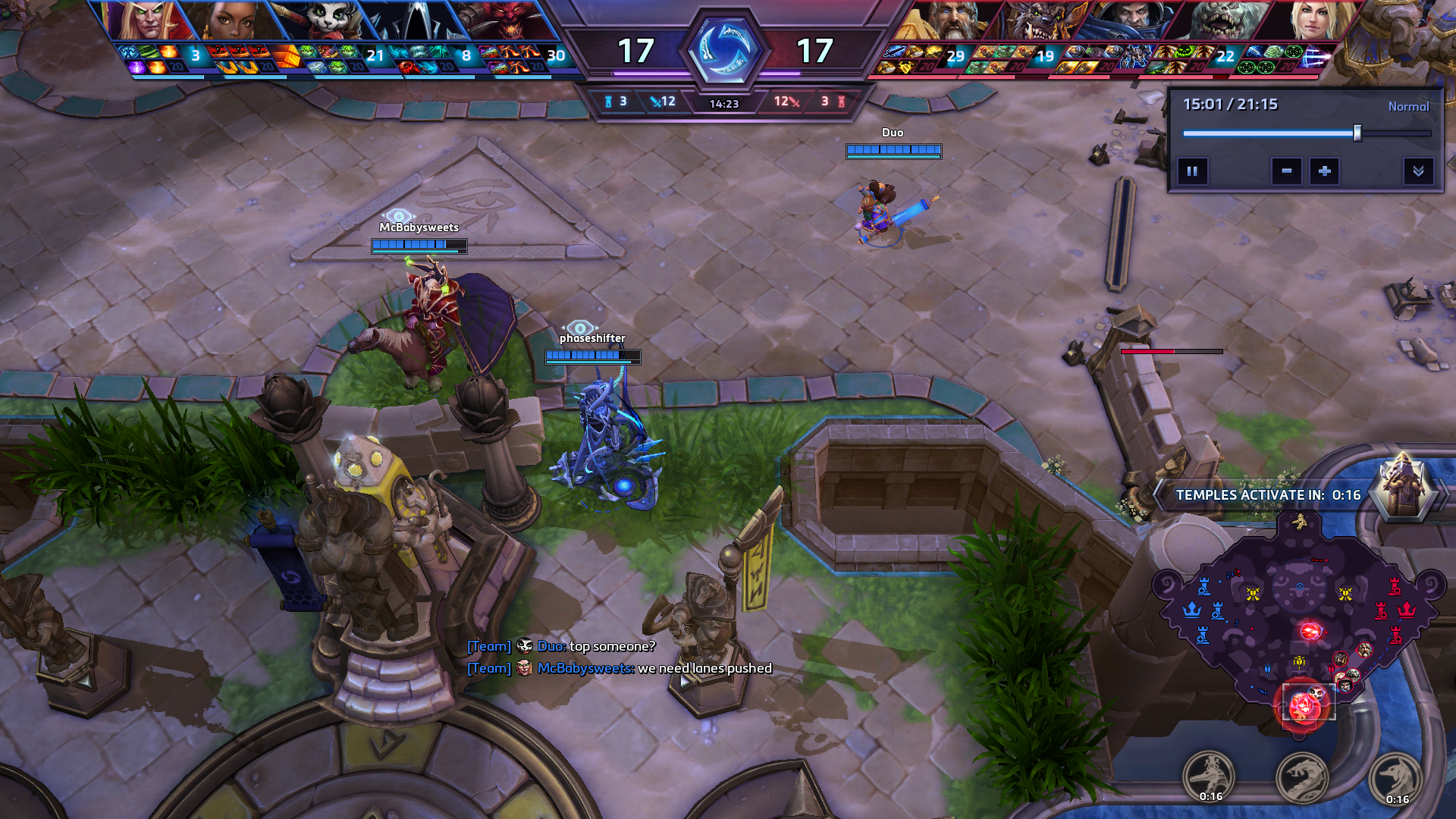 So my team decides to split up. They all seem to think that it’s a good idea to send people top, and have the rest of the team stay bot. I don’t know why players keep trying to take both temples at once. However here’s my problem.

If I stay with them bot, we get killed, and they take both bot obj and the boss. If I go top, same thing happens, except 2 of them die bot. (The diablo died mid on his way top), or they could go top, still win then take the boss, or leave 1 person at obj, and hit my team still outnumbered.

So I only have bad options. (If you’re wondering what actually happened, they killed us bot, then took the obj and the boss.)

Is there a way out of this?

Beg your teammates to come to the bottom temple, if you do a weird split like 2-3 while all the enemies are bot, what you said will happen: They get both a full temple and a boss, the people top have no way to get to the boss quickly enough (or they might even be ganked after the temple is done).

I can’t think of any other good solution. Just ask or beg them to leave the top temple. They are leaving the Boss completely exposed to a fast capture and the two lone players are very vulnerable to a gank anyway.

Unfortunately as a team game with random players, sometimes they just wont listen and they will die in this situation, enemy gets a boss and full temple and the game could be lost.

Nah, those folk need to get the hell out of top lane. They made a blunder going there and splitting away. With a top+bot spawning at the same time, the bottom temple much more valuable because the Boss is right above it, and the people at the top are so far away the Boss can be captured without risk while getting the full bottom temple, or right after it.

Though once your Diablo decided to split and go top & died, I don’t think you had any good solutions left. Accept the blunder, def boss and hope your core survives so you live to fight for one last teamfight.
No point blaming n’ flaming the Diablo either, he will derank soon enough to very low ranks if he keeps doing that.

Were they a party? It seems kinda dumb to think splitting was a good choice to begin with.
What could be done in such scenario is send 1, and only 1 top before getting at least 1 kill in Bot.
Otherwise i think it’s much safer to just give up bot and engage in a TF if the enemy team tries to get the Boss. Poke first, hope that people top can get there fast enough and then contest.

Pick 1 that went top and tell them to come back if possible. If not its okay just use your 3 allies to deny boss. Dont fight. Do not fight. Just poke and show that you’re there. Chances are if they try to boss with 4/5 your allies will make it back in time

I see 3 heroes afk bot when there’s a bruiser camp up on equal map pressure.
Li Li’s ult isn’t up until 21 sec, get out of there and group up. Ping retreat for both bot and mid.
They don’t have a good boss burn, but you have the eye, so it’s fine for Li Li and diablo to hang around mid and scout the boss with Fire Stomp.
You’re ahead in XP, so it’s a race to 20 by playing safe.
Just do the camp with Kt while Qhira sits on top shrine.
Your 7 doesn’t make sense with your 16.

I fell to Silver, at that level, I learned that you cannot expect either your team or the enemy to make the most logical play.

If we all move top, there is a very good chance that the enemy will simply come top. These players go wherever there is an enemy to fight, not necessarly where they can ge the most value. About 65% of my games sees my team mates ignore an empty temple, and go contest the one the enemy has already started.

Not that I could get my team to follow any kind of plan. I always try, but pinging in these games has the same effect as throwing paper planes at a nuke. They were convinced the split was the right play, and they would not leave.

The Diablo did not die in the bushes near the boss. He died at the bush north of the boss, mid lane, trying to perform a one man gank. (Qhira had left to go top). But there was no way I could stop them from splitting. All I could do was make a choice based on what they chose to do. I know what the optimal play is, but that’s irrelevant. The team will not make that play.

The team will not make that play.

As lucifer said you could have moved earlier to the top temple and also doing the bruiser camp as he mentioned. One of your teammates (Lili) even asked “someone top?”. But your team and you didn’t saw this and were afk bottom, probably to ambush them… but this plan wasn’t really that great. The reason why it wasn’t great, because you ignored the top lane,even though it was more important to your team.

You need a dedicated shot caller who makes good decisions to avoid situations like these.

When the shotcaller says get ur butt to objective 30-45 seconds before it pops, you damn well do it.

What Danktemplar said is important in Bronze and Silver. You have better chance for the players to follow your calls if you ping before they decided to do something. It is not necessary to do it 30-45 seconds in advance though. They rarely abandons something they are already doing. It is not easy to do though. Not all of them will follow but more than if they already started to do something.

Also they tend to be « greedy ». Actually I am not sure it is greed. For example, if your team is sieging and you ping retreat, they could think of retreating but there is practically always one that will want that last AA or ability. In some sense, take a margin that you may not need in higher ranks. It is not optimal if you were to have perfect players but they (me included) are not perfect. So take that into account into your decision.

Finally, if some of the players are already following your current call, you can wait a little bit, let’s say 1 or 2 seconds, and reping. From my experience, more is useless. In the example of sieging, it is as if some players see the team still there but the second ping reminds them to look again around them. And then they can see that the team is actually retreating.

The Lili wanted one of us to go top, she didn’t mean that an enemy was top. But even if she did, that would have meant we were 5 vs 4 bot.

But what do you mean we were afk?

The reason why it wasn’t great, because you ignored the top lane,even though it was more important to your team.

What? How did I ignore the top lane?

You need a dedicated shot caller who makes good decisions to avoid situations like these.

In a SL game with randoms? That’s never happend to me like ever.

What Danktemplar said is important in Bronze and Silver. You have better chance for the players to follow your calls if you ping before they decided to do something.

No, because all pings are ignored. Don’t you think I tried every time I knew they made a bad call? Why would I not ping? I mean seriously.

But it seems you were emotionaly overwhelmed and couldn’t think straight. Why would you not ping? Because all pings are ignored. If you do really think that all pings are ignored, I suggest you don’t ping at all. Pinging would only be a waste of time and energy and more importantly would shift your mood in a bad direction.

You also completely missed my point. I may have been unclear but I would also suggest you reread calmly and carefully. You should easily see that I was referring to the second part of DankTemplar message.

By the way, I am not playing your games, you are. So take advices for what they are: advices. You can use them, adapt them or dismiss them. It is all up to you.

No matter how your team is acting and doing bad calls, there is always a better call than just insisting on your original call and dying outnumbered vs the 5 men opponent team. What I have learnt is that it is important not to have a snowball effect after someone makes a bad call, because there will always be bad calls, especially at lower ranks.

So if this diablo decides to go top and not following your ping, then dont just stay where you are and adapt! Tho, splitting up in this situation could have been ok in my eyes. If Diablo hadnt got caught by qhira in the middle and instead had been rushing top unnoticed by the enemy team, this would have meant a free uncontested temple on top, which is as worthy as 5 men of the enemy team staying on the bot temple, its a good trade in other words. But this would also have meant that you guys retreat and just make sure that they will not also do the boss. As malthael you could have went middle lane and push a bit. They cannot do the boss and obj at same time when you are as 4.

So what would I have done in your situation? Seeing that diablo wont listen and does his own thing I would have concentrated to ping back your teammates. At first, what is Tychus doing so deeply near the enemies? He will probably be dying as first. I guess Lili is moving towards Tychus trying to help him out. In this situation ping for retreat, maybe its already too late for Tychus, but lili can still get away with her movement speed. So you and lili have good chances to get out alive. Give up the teammates that wont listen and make sure you survive. If nobody listens, at least you would survive, which is still the better outcome than joining a fight that will be lost. If everyone but you dies (in worst case), then you could at least sneak the top temple for example.

I have to add, maybe you could have even helped diablo out on his way moving top and easily get a kill vs qhira, or at least kill her after she killed diablo (which she cannot do veey quickly). But staying bot on temple without tank may be the worst decision.

You have misread the situation. Qhira and Diablo are in the same team and Tychus is in the opposing team XD.

Oh my bad, so much effort for nothing then haha. Well then let me reconsider everything later. Tho, my general statements may have still some value