Castanar Facility was imo one of the most fun missions in starcraft 2, the map was a dungeon crawler where you run around with a small squad inside of a dominion research lab, the lab contained lots of zerg and protoss prisoners aswell as large warbots, and also the most notable things, was a single hybrid

The facility itself was located on a space platform above castinar, that was disguised to look like a fuel storage. The asthetics of the map were not the most interesting, not to say that they were bad, but they were pretty standard for starcraft, a lot of metallic colors with some brown background (cuz it was in an asteroid) 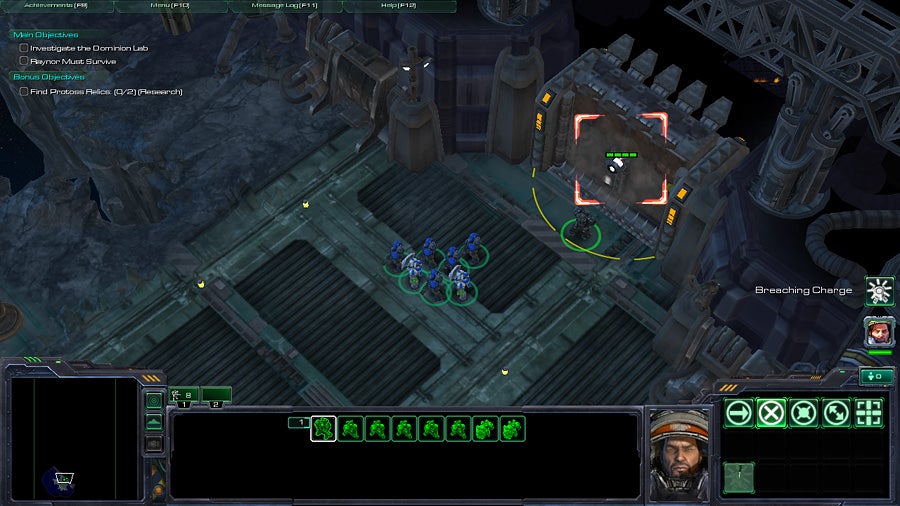 However if this map were to be added to HotS I think it should have a more chaotic clash of protoss zerg and terran technology in it, there should be parts with creep, parts with destroyed protoss machinery or protoss blood, and most of it being the grey/green/brown mix of the actual map.

How the Map Will Work

The hybrid objective will occur every five minutes, every time a psi emitter is placed during the game, every future hybrid for that team gets a 1% boost in stats, the hybrid are not actually on your team, and instead are simply hostile, although they will not target your buildings, they will target your heroes, mercenaries and minions however they do prioritise targetting opponents. The hybrid deals a large amount of splash damage each attack and although there hp pool isnt initially large, there growing speed easily makes up for that, they start with the same movement as a hero. The hybrid prioritise heroes last, prioritising minions/mercs, structures, monsters, heroes in that order.

The hybrid have 2 total abilities, the first one it will cast aslong if it is in range and targetting a hero, this ability is called constricting slime, after a .2 second delay the hybrid sprays a mucus like substance on everything in a radius of 7 units reducing there movement speed by 50%

The second ability the hybrid have is consume DNA, which it uses whenever it is below 25% hp and there is a hero in range or when targetting a hero already effected by constricting slime, the hybrid channels the ability for an indefinite amount of time, granting it unstoppable aswell as dealing 5% of the heroes maximum health as damage to the target hero every second and healing it by 5% of its maximum hp every second, the cast range and breaking point for the ability is 12 units.

The mercenaries on this map are a mix of terran zerg and protoss.

The Protoss mercenaries are are 2 bruiser camps, both of which contain stalkers, stalkers have very low hp however they have a shield that is equal to 100% of there maximum hp that regens 5% every second they are out of combat, everytime a stalker takes health damage, it retreats the opposite direction of its attack path until its shields fully recharge.

The zerg mercenaries are 2 siege camps, both of which contain 2 braxis ultralisks and a braxis guardian

The Terran's mercenary is a boss camp, located on the opposite side of the middle lane to the hybrid containment cell. It has a warbot in it, which operates similarly to the archangel, however instead of its giant firing aoe, it activates it flamethrower dealing double the damage of the firing aoe in over time damage. Each one of these attacks has the animation of it swapping its weapons (as it does in the campaign)