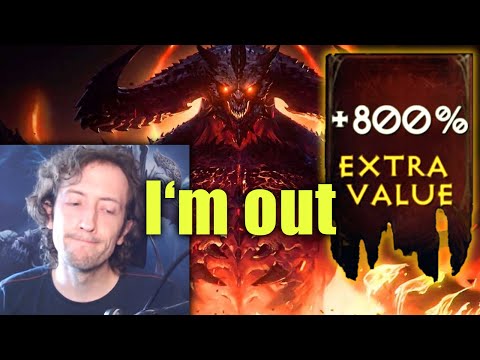 Hopefully he actually sticks with it.

Uh, that maxroll news he mentioned…
They did what I hoped they would do; remove Immortal from their site.
Tons of respect! Think Il will donate some money to them. Certainly better value than D:I.

The Maxroll team covers games we are passionate about. We had high hopes for Blizzard’s Diablo Immortal release, since it could ingratiate a new audience and generation of gamers to a franchise we love. For two years our team (along with the community) thoroughly tested the Tech Alpha, Closed Alpha and Closed Beta, concluding that the core game could be molded into something great. We provided a plethora of feedback during these testing phases to help make Diablo Immortal the best game it could possibly be. However, with heavy hearts, today we’re announcing the closure of Maxroll’s Diablo Immortal branch.

Release - Diablo Immortal released on both mobile and PC Beta. Our worst fears were realized. Many of the key issues are still not fixed, and the Free-To-Play experience is worse than we could’ve ever imagined. The shop allows players to acquire infinite Resonance and Combat Rating, and new 5-Star Legendary Gem bundles out-right sell them directly. Newly introduced Paragon caps on Upgrading gear, and hidden caps on practically all looted items deflated the incentive to play the game. With nothing to grind beyond a few faction dailies, players lost interest quickly.

We knew all along the game would be Pay-to-Win, and leading a cherished franchise into the mobile market would certainly bring challenges for both the Developers and Community. Despite these concerns, we planned to prevail and make the most of what we thought was a good core game with plenty of potential. With how the release turned out, we couldn’t have been more disappointed.

It’s never easy to walk away from something you’ve put a lot of time into. However, we feel responsible for the games we choose to support, and the types of games we want to see be made. Most importantly, Maxroll exists to provide a service to our community members, and we consider it our duty to be good caretakers for them. As such, we cannot in good faith continue to cover this game.

I sensed undertones of sadness there. When games like D:I come out, they are seen as huge opportunities for streamers. Without anyone actually saying it, you get the impression like they are going to shut it down.

thanks maxroll for standing up to this baloney.

People left when D3 came out and provided a similar feeling. Disappointment. The real money auction house that was designed to force everyone to purchase their items from the auction house by making useful drops so rare that they only way to gear up was going to have to be through real money. Ten years ago they tested the waters to see if they could microtransaction their customers to see how easily it would be to sucker them out of more money.

This game is the culmination of 10 years of trying to make blizzard just another freemium publisher that cash grabs and loot box casinos their customers. What a true fall from grace.

I’m surprised he got so far to be honest. Although he definitely got carried a lot to get Immortal and Legend.

Anyway, he’s primarily a leaderboard/season blaster so there’s no way he would have stuck with D:I for long

When games like D:I come out, they are seen as huge opportunities for streamers.

Absolutely. This is their business model. D3 is effectively dead in terms of streaming content outside a few weeks a year and a season like S26 doesn’t provide a group like Maxroll much content to develop. Diablo Immortal was a huge opportunity for them so it shouldn’t be taken lightly at all that they are pulling away.

The question is will Blizzard care. Probably not, but they should. A huge portion of the industry’s marketing budgets these days goes towards influencers…youtube, twitch and the like. Not only is Maxroll pulling back from a Blizzard title, they’re moving towards rival titles in the genre. So Blizzard should absolutely care, especially with this game being grounded currently in China.

Uh, that maxroll news he mentioned…

Here is the link for those who want to read the source. There is a LOT more there than what Shadout quoted.

The Maxroll team covers games we are passionate about. We had high hopes for Blizzard's Diablo Immortal release, but it was not meant to be.

I sensed undertones of sadness there

I am very sure there is.

Blizzcon 2018 was shock, anger, acute disappointment, and worry - over what a mobile game will be for Diablo.

They spent years, as they said, on what really IS a good game at the core. There was hope, esp when they let us have it on PC.

For anyone who likes to “max” their character though and play end game, the $$ bar is too high. They (maxroll team) tried - and did well, but it is not sustainable long term. I don’t blame them.

For someone who wants to casually play some daily stuff and ding a battlepass level, it is enjoyable. For serious gamers like that, it is not.

That was really well written. I have not talked to any of them about it though. I hope the folks working on the Immortal branch get other assignments if they want them (I assume the site gets some sort of ad revenue or donations).

But I don’t chase leaderboards either.

I used it to learn more about the various in-game events and systems. I don’t do the end game either though so that part is not something I am into.

But I don’t chase leaderboards either.

For D:I? There isn’t much to write about in that game to be honest. Pretty much everything they could provide is there. It’s a small game.

Apparently, not sponsored by Blizzard or this would never happen. Funny. And a little awkward. But mostly funny.

Sadness is reserved for things that matter. This game never did.

Each zone has about as much to do as all of D3/RoS & the Necro DLC.

Seriously, did you clear all of the content, or did you just rush to lvl 60?

Each zone has about as much to do as all of D3/RoS & the Necro DLC.

Each zone? No, not at all. Comparing the entirety of both games? Immortal has D3 beat.

If the game turns out to be a flash in the pan then that is fine with me because I haven’t spent any money on it. Where it was fine for a while then goes belly up because of the heavy handed pay to win.

That guy spent $0 and played it for a month.

Why put it like that. Should be “Wudijo has defeated D:I” (that is, by quitting it)

I sensed undertones of sadness there. When games like D:I come out, they are seen as huge opportunities for streamers.

Should never have been an opportunity for them. It’s their loss that they chose to capitalize on this morally bankrupt venture providing tepid gameplay. Hopefully you don’t also feel sad for them, man.

There is a LOT more there than what Shadout quoted.

I think Shadout grabed the essential parts, and did not make the conclusion, and what the article is about different.

that maxroll news he mentioned…

Yeah, Raxx has a video about them dropping Immortal completely from the site soon… 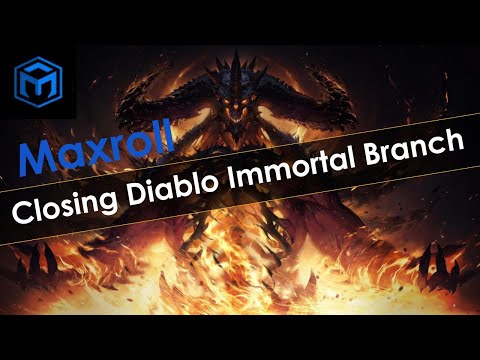