WD nerf destroys spirit barrage ! he would be too weak!

At this stage with the 7000 paragon I am able to play gr 135 - 140 more with wd, then it is weak … after the nerf, which is planned to fall 10 gr down to 125 - 130 and that is too much compared to other characters !! !
WD does not need a nerf mundunugu but needs care for other sets that are terribly weak.
Please don’t ruin our spirit barrage we love her …

Yeah don’t really understand the nerf. Simply to bring it more in line w/ other WD sets? Blizz should buff/redesign the other sets then, not nerf SB. SB is the only S-Tier quality build WD has – the other sets/builds are simply too weak. If this goes through, not only will WD become a mediocre solo GR pusher across all builds, the class is in serious danger of having little to no role in high tier groups.

Obviously DH GoD getting the hammer is pretty bad/overboard, but this is also confusing based on WD’s current place in the meta.

yes, the nerf destroy a set that anyway was nerfed hard in 2.6.9. ok at that time let’s say due to a un-intended mechanic, but now they destroy a cool build…
this build needed a buff in terms of defense, not a nerf

I first did a 124, 120, & 118. It felt OK in terms of survivability, and the build still does pretty good at erasing normal packs of trash, but elites/bosses are now really rough. All these GR tiers felt pretty hopeless tbh. The WD is not great at kiting in the first place, so very often the elites were left over w/ ALOT of health and no good way to lure them to the next mob(s). I was able to clear GR115 w/ 2 minutes left, so that’s good I guess (?), but far from a sure thing. I heard speculation pre-patch that this would only result in about 5 tier nerf, but it seems OP is approximately correct in that this appears to be ~ a 10 GR nerf.

Not sure this is in line w/ stuff like LoD Twister, BS Necro, etc. which also lost a critical cube slot for their DPS. If all of them are losing the same amount of GR tiers, I guess that’s fair, but honestly both Twister & BS outperformed SB in solo LB in the first place (like 5 tiers on average), so not sure they all needed to be equalized the same way.

Mundunugu’s Regalia is overperforming compared to other sets. This change to Gazing Demise should simplify the gameplay mechanic while reducing its damage output.

Curious about this one, Blizz. Overperforming compared to all other sets, or compared to WD sets? If it’s the former, the confounding factors because the era wasn’t changed make this very difficult to see from where we, the players, are standing, so some clarification would be appreciated.

I can more easily understand if they mean overperforming when compared to other WD sets, but you’d think this would mean that Blizz would consider a small nerf to Mundunugu’s in tandem with a buff to our other sets. As it stands currently, all they’re doing is leaving WDs in an awkward spot, and it’s particularly frustrating when other builds that were performing similarly to or even better than Spirit Barrage are left untouched. Now, to be 100% clear I don’t want any builds nerfed (revert the GoD nerf!), but it’s hard not to feel a little jilted as someone who loves the WD class right now

Its much more time consuming and need more efort to balance all weak sets. Its faster and easier nerf strongest one.

Game got to low support to balance in right way, forget about M6 and join Rathma party. 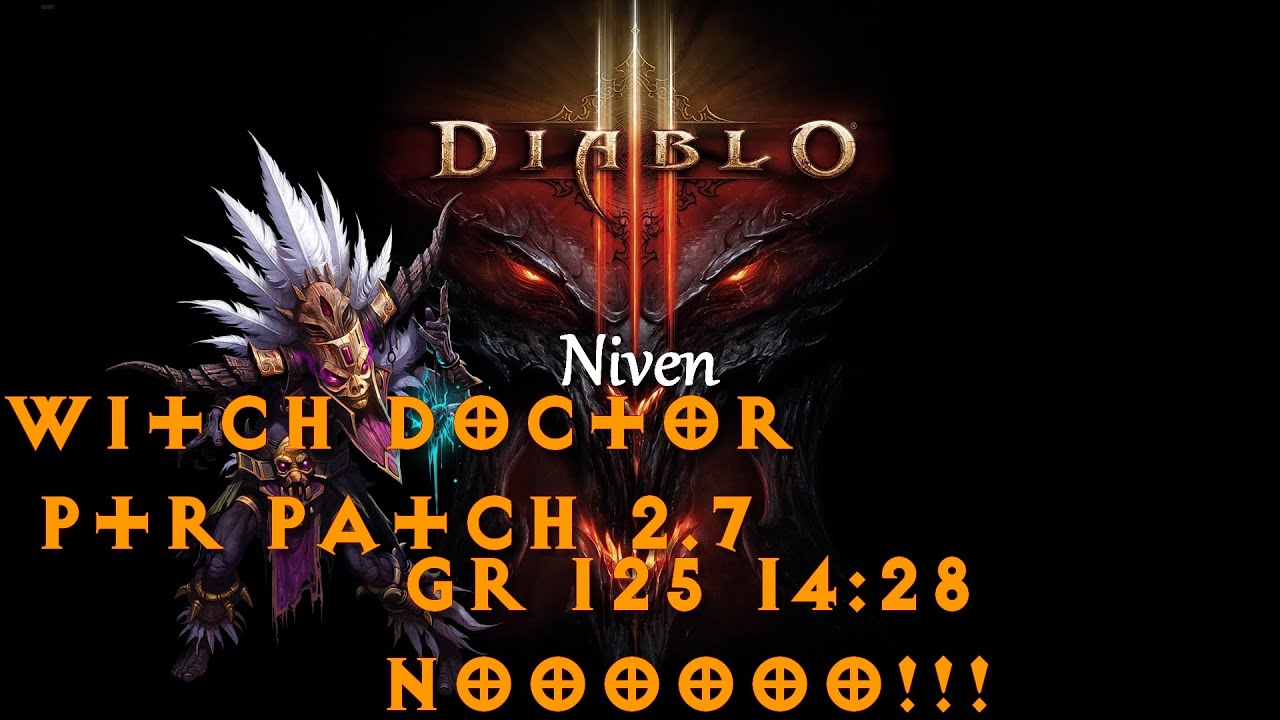 If anything, before reading the patch notes i always thought that this build was going to get a slight buff sooner or later maybe something with 5 runes for big bad voodoo or something like a quality of life change regarding toughness. Instead they nerf it further down cause i don’t know it was fun to play i guess. Or maybe it was threatening just by being a few grs lower than necro ? I don’t know. Someone posted this on another topic : WD 1 Gr150 clear, necro 220 GR 150 clears. That is prior to the incoming nerf and the 2 new rathma necros that can probably clear gr 150 too. Now what would a logical person do?? Nerf Witch doctor of course… Sure guys… You convinced us that you want balance for the game. And the same goes for dh too. The argument about missile dampering is laughable. Not only the issue won’t go away but now you are forced to do the same thing with hungering arrow but with weaker sets like marauder/natalya/UE. I am sorry i am getting repeatative saying the same thing over and over but i will keep saying it until the decisions of the devs start making some sense. For anyone wanting more proof of how bad they treat some classes look at the latest rework wd got… Zombie bears, hahahaha.

i always thought that this build was going to get a slight buff sooner or later maybe something with 5 runes for big bad voodoo or something like a quality of life change regarding toughness.

I expected the same, all runes on Voodoo and double the bonus of each rune, this would be great. meta WD does not even use Voodoo now, which is part of the set bonuses…
instead they destroy a really fun to play build…

It would be fine to bring SB-set more in line w/ other WD sets if any of those sets were better than C or B-tier, but none of them are. I’m not the first to say this – WD is going to have little/no role in serious group play and will not even come close to the solo GR pushing (or speed) capabilities of other classes. Necro will dominate the Trash-kill role in groups, as there are at least 3 or 4 S-Tier viable builds they can run, and Crusader AoV or Bombardment also come out way ahead vs WD w/ the removal of the 4th cube slot. I foresee WD competing w/ DH for the king of unviable low-tier builds & see very little play.

It seems to me an unstated reason Devs felt they needed to do this was because other trash-clearers (BS Necro, Twister) lost big multipliers from their cubes (about 250% & 325% respectively). However the WD was already underperforming in GR pushing compared to these classes w/ the cube slot in play (by at least 5 tiers), and unlike WD none of these classes got nerfed beyond the removal of their cube slot.

If the gazing nerf were say to a flat 300% instead of 150% (a loss of 150%), that seems like a more sensible scaling back of the build (a loss of something like 5 GR tiers, not 10’ish like we’re seeing now). I think this would bring SB back in line w/ other classes’ damage output and continue to provide WD players a viable high-tier build alternative.

It would be fine to bring SB-set more in line w/ other WD sets if any of those sets were better than C or B-tier, but none of them are.

Devs does not knwo what they are talking about. WD SB is not wasy better now than other WD sets for solo. In group is something else, but WD SB need Palm supp monk, supp barb… to work. Destroying this build means WD will be out of group play, for solo will be very week., practically they are destrying a class which now have a fun to play build. I am done with Diablo games, this is not gaming, every patch we look how devs destroy your build that you spend lot of time to get items for…

After my own PTR testing I’m confirming that WD is down 5 to 6 Tiers.

I have to agree that the nerf is just STUPID. Probably the devs are angry and punishing WD players for ignoring all of the “hard work” they put into the last patch.
After all they did give us a new mojo, and extra chickens. Right?
Regardless of the fact that they suck in performance compared to Mununugu’s, we ignored them and must therefor be punished.

This will teach the ungrateful wretches! Let them play Zombie Bears or nothing at all!

(A fabled explanation to Blizz’s approach for “balancing”)

the problem is they are balancing like this for 9 years already in D3…
wait for D4, will be the same, 10 years of balancing…

I tested on a few gr 130 and it’s crazy. I would just run maps all day where I catch festering or battlefield, perfect thrash and good pylons and bosses. The same as before the nerf is 140. That’s 5 - 10 GR down and it’s very weak. The fact that wd did not pay much attention to the defense where the reduction without sacred is still 6% per stack soul harvest = 30% reduction of damage. He has a spirit walk, but he still doesn’t.
It is an intelligence character, so it should be equal in all sets - balance wizard and necromancer.
This nerf will completely destroy … which would be a great pity, as players still like spirit barrage. If they leave it as they are now, solo max. 135 - 140 will walk as a crusader, wizard and necromancer. By now he is an equal character and the nerf has already gotten when the spirit barrage no longer has a bonus for pets !!!
This nerf is a huge mistake. After all, it doesn’t destroy it that way.

I only do w/d… I ran many gr’s with the new Patch with Mung and HellTooth in the PTR. Morgan is wrong… I’d rather do Helltooth now if it stands.

Morgan… you are wrong… It’s bad enough we can’t do w/d in a public game because we move so damn slow. Now you want to cripple us more.

Regardless, I’m not the one ‘crippling’ the WD - I have no power to make changes to how any class plays - so your efforts might be better directed at those who do have that power