So are you for botters, exploiters, etc.? your business…
then why play at all? do everything with K.I. and cheats?
and drinking beer in the evening are you laughing at everyone who hasn’t even reached 1k? (all while your bot farms paragon at home)

Well, as many before, i think, much better than this so called “buff” would be better to have season without any buff. Green circles are bad in many situations (plagued etc), lava wave is… Well… expendable… Tornados are good for what exactly? Running over screen and hit something one per hour.

I disagree. While, yes, those improvements would be better than nothing I feel as though the mechanic they recycled (kill things and random crap happens on the screen) is the worst mechanic in their rotation. If they plan on being lazy in a season and can’t introduce something that changes builds or adds a gameplay element then do something that is non-intrusive like add a new goblin type or something. Anything but the on kills buffs. I think people were desperate for anything new and were willing to take anything a few seasons back and it’s come to a head now. The kill-based buffs at best do nothing and at worst do this. Season buffs are crap and this one in particular needs to be rectified mid season.

This is for PezRadar and/or anyone from the Classic team that might see the contents of this post.

Here are some examples of what this theme is doing to us while we play: 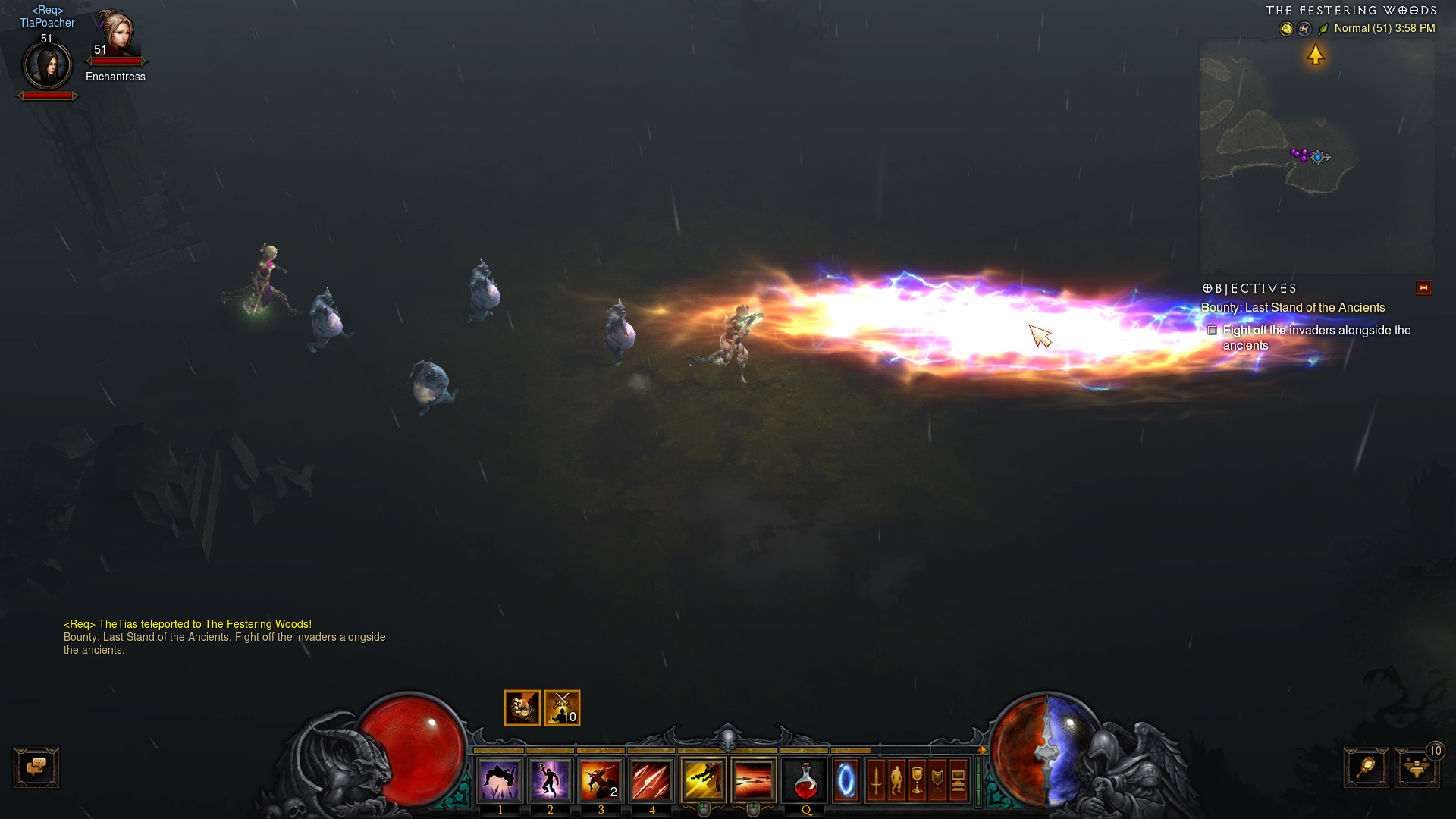 In the above image, the seasonal theme has darkened the map to almost no visibility (in combination with the already existing “fog” color filter in use) and the lightning beam’s brightness creates a very harsh visual for players. 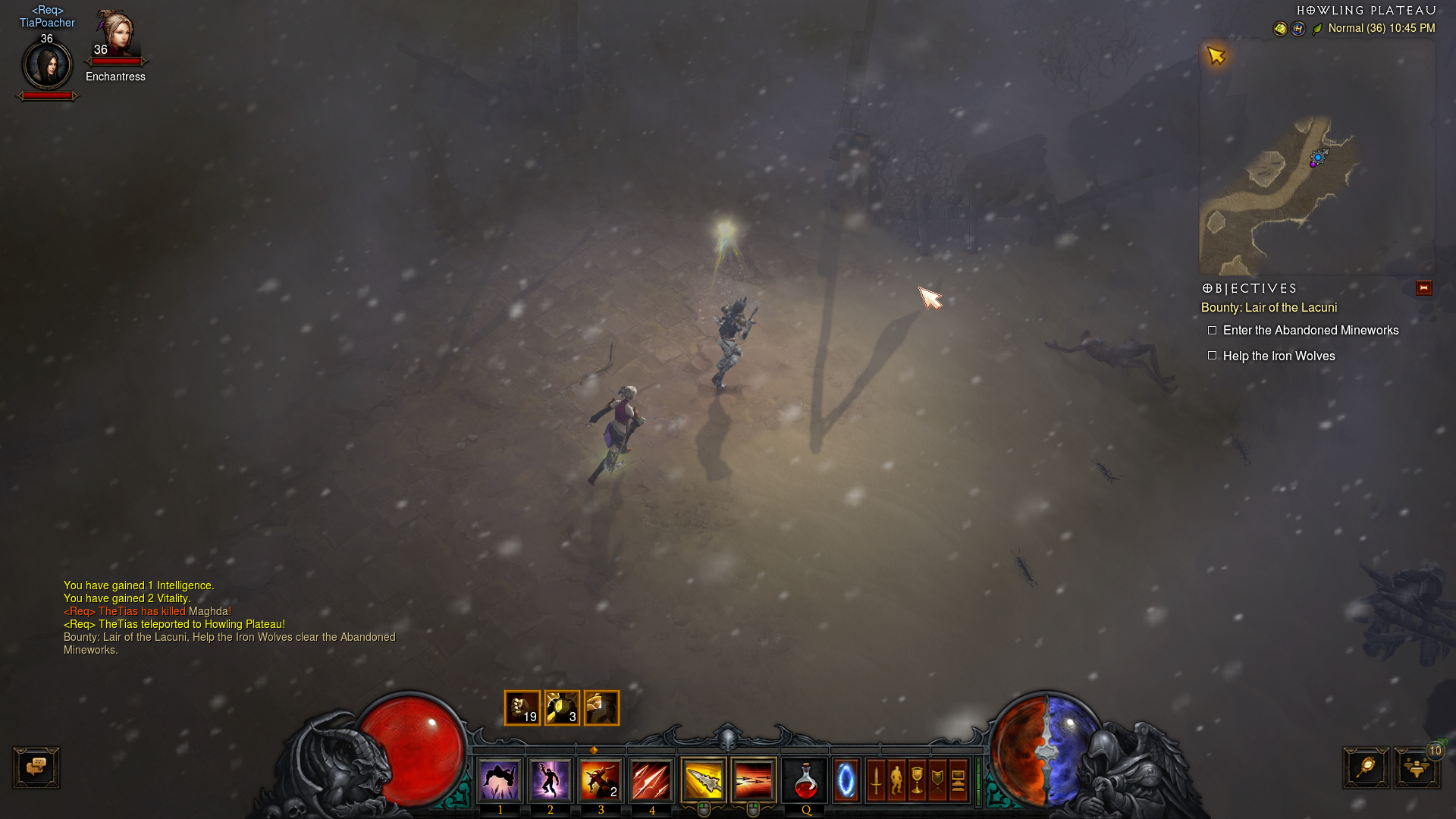 In the second picture, we’ve got the darkening effect (again) coupled with the original snow effect that was introduced into the game when Sescheron made its debut.

The snow was later changed to what you see when you enter Sescheron currently or are in a Sescheron type rift map. That is, the “fixed” snow only goes downward and does not change angles as you move (no nauseating or disorienting visuals) and there is far less snow in general, so we can actually see what’s going on. The seasonal theme needs to use the current Sescheron snow, not the stuff you see in the picture above. 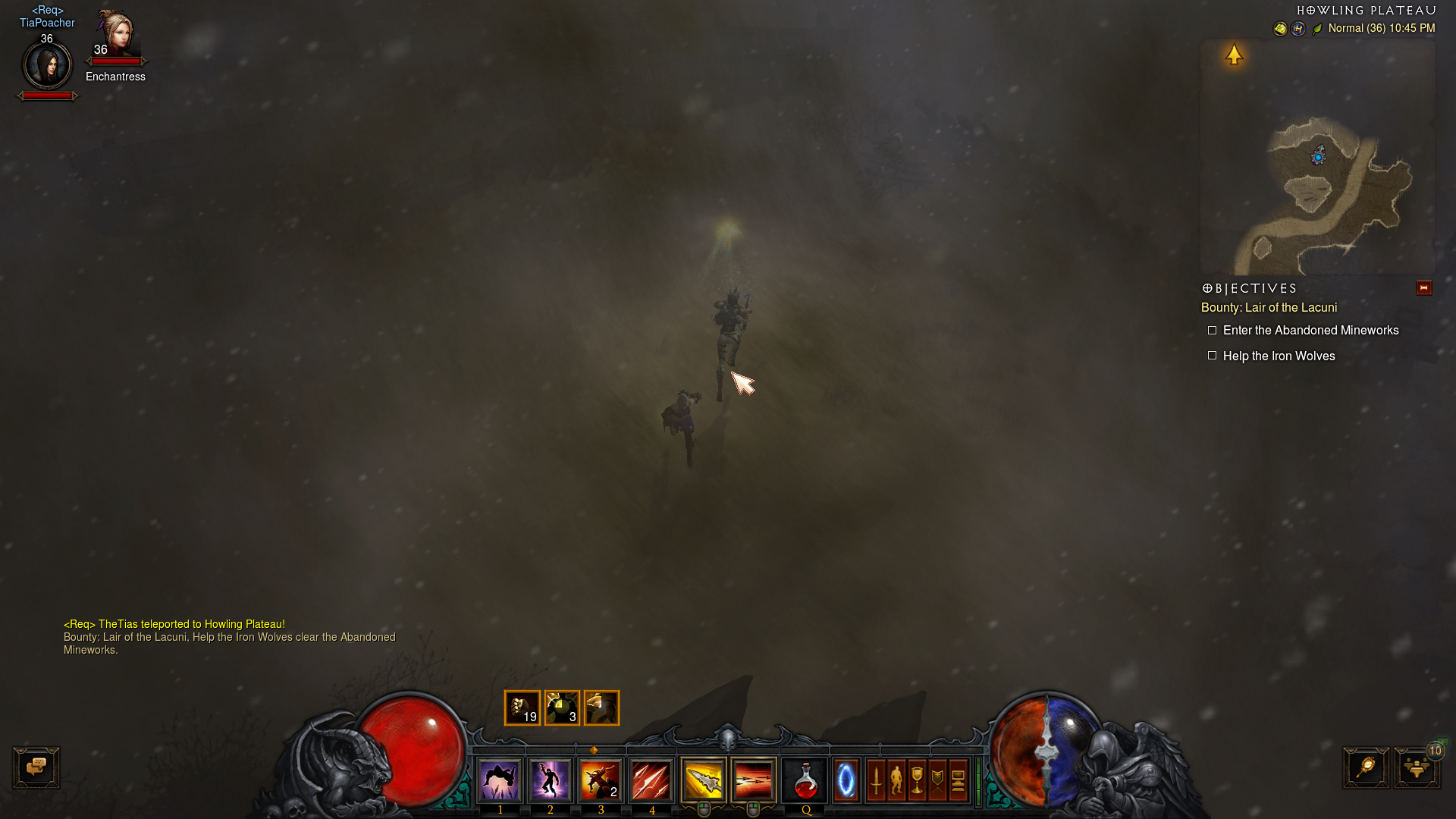 The third picture here should speak for itself. This is what happens when the tornados appear on a sand map. You get a darkened map, the tornados (until they’re done), and a perpetual sandstorm. Combine the first and third issues and you have a map where you can’t see anything at all. Oh, and this picture also has a snowstorm on top of that because the theme is bugged and triggers back to back to back a lot of the time.

Now that you have seen a glimpse of what we’re playing through, also understand that the darkening and visual changes persist until we leave the map to go anywhere else. They don’t ever go away on their own if you remain in the map. Imagine having to deal with a rift like this. Sure, you can get to the next exit - if you can find the exit in all of the visual blockage onscreen. But you’re just as likely to die from trying because you can’t see anything.

So this is what we the players are up against. “Live” Instagram color filters and some really gnarly visuals that just blot out everything beneath them. These really need to be ditched post-haste.

Do us a favor and just turn off the effect entirely and/or go back to a cube-everything or LoN buff. At least those are useful to everyone and extremely fun, and don’t absolutely ruin visibility for absolutely no useful effect. Or maybe a free Convention of Elements buff instead of this one. Whatever it takes to not fill the screen with garbage.

Thanks for the response regarding that topic, nice to see the interaction and communication, really better than getting nothing/silence. Hope to see/hear some good stuff soon.

As Rich noted earlier, there will be an update coming that will address some of the accessibility issues with the seasonal theme along with the interactions its having in set dungeons. Team is testing a few things and we will provide an update once it is ready to be deployed.

We greatly appreciate the feedback on all of this and the extra work that some of you have provided in captures, context regarding these accessibility issues.

19 Likes
I have Epilepsy, this season is a problem
Season is over, exploits everywhere
Trials of Tempests ruins the storytelling
A request for help
Zyrixion-11305 11 July 2020 00:26 #202

I mean, I hear you but, that won’t fix this being a really uninteresting season buff. Just scrap it, call it a good try, re-enable cube everything for another season, your community will be vastly happier anyway, since that should’ve really become part of the base game.

Reads like they are going to turn it off in set dungeons, and tone down the visual and auditory noise. Sounds fair.

As Rich noted earlier, there will be an update coming that will address some of the accessibility issues with the seasonal theme along with the interactions its having in set dungeons. Team is testing a few things and we will provide an update once it is ready to be deployed.

I’m afraid it isn’t just interacting with set dungeons. It’s interacting with the challenge rifts too. And can proc in town if you TP back just as the buff does one of its random premature resets.

I mean, I hear you but, that won’t fix this being a really uninteresting season buff. Just scrap it, call it a good try, re-enable cube everything for another season, your community will be vastly happier anyway, since that should’ve really become part of the base game.

I’m not going to lie - this would make me so immensely happy right now it isn’t even funny. At least that would help me rather than cause me issues.

Leaderboards need to be wiped clean and “exploit” fixed. Everyone starts at t1 with current gear/paragon.

It’s interacting with the challenge rifts too.

Now this doesn’t matter for a change.

Sadly they want to address visual clutter (great) and set dungeon impact (people have done this by now probably) - but not a word of new GR150 “meta” with unlimited stacking in multiplayer.

Make the stupid set dungeons go away and stop making them required for season completion. No idea how anyone could ever think this was a good idea for a game. Kind of like Season 21 the Season of Awful Useless Buffs.

As I thought no fix for weekend, thats why there is this post. Seems I’m gonna wait longer to even start that season.

Accessibility issues? As in issues of the handicapped? Please, don’t try to spin it as if the problem is with us players who cannot stand the theme. Why use this cover term? Call the spade a spade. These are over-agressive lighting effects, not accessibility issues. Keep the game visible, this is not a special need.

Well, whilst it’s affecting everyone due to the horrible lighting effects, it’s especially bad for players with epilepsy, I’d imagine.

Try to kill maltheal when that darkening is happening . I couldnt see him or his abbilities…

Need to sync the theme’s timers as it’s already done for stacks. This will stop the exploit of infinite stacks

Many people I ran with have switched to exploiting the season theme to do 150’s getting tons more paragons and gem levels. Saying they don’t want to miss out on being able to get all those paragons. They seem to think its fine to exploit and that Blizzard won’t do anything. I hope Blizzard does not let them get away with it.