There is. It depends on your computer and your network connection, but there is.
It is black.

I’m not sure about that, as I have the exact same “black screen”, no matter, between what WPs I travel, or when going through TPs and the same holds on BNet. I just tested it before I wrote the post, you quoted.

Nevertheless, even if there is technically a loading screen, it is short enough nowadays, such that it doesn’t influence the game on any half way modern PC.

The latter one now having loading screens is a bit concerning imo. If you TP back to town, when in the middle of 10 mobs and go back, you want to open a new TP asap. If you have a loading screen with inconsistent duration, that can be really hard to do reliantly.

That is why you will not take damage while on the load screen after the fix.
During beta however you will find some instances of this load screen of death.

But that does not fix the problem. The timing is still off.

If you have a loading screen with inconsistent duration, that can be really hard to do reliantly.

You had the same effect before.

I never realized it and both in SP and on BNet I didn’t notice it at all, when I tried it a few minutes ago.

diablo 2 was designed for slow AF computers (by todays standards and lower end by 2001 standards) and dial-up. If you slow your internet down to 56Kbps you will find the loading screens you say don’t exist in d2. The fact that the modern game brings those back given the level of future proofing it has compared to the classic which had 0 room for any kind of technology advancement to take advantage of is more than enough trade off for a minor load-in time on a HDD.

I never realized it and both in SP and on BNet I didn’t notice it at all, when I tried it a few minutes ago.

Sure, it was not as noticable back then, as the data to be loaded was very small. Back then it was just a bunch of sprites, possibly a few KB. While now they have to load alot of textured, models, animations, etc. into the cache, likely filling up a good part of your ~16 gb of ram (let’s say 4gb).

You can always tweak it a bit by loading low resolution first, then loading in the rest during load-up, but you will - at least for the moment - experience a larger delay.

I personally am not so much concerned with the death on load screen or opening the tp after tping into a group of enemies, but more with the flow in things such as a run or the likes. In old D2 you would simply enter/leave areas within seconds, refill potions, sell items and go back. Now you will be taken a bit out of the flow by that load time.
That is why i hope for it to be shorter, but given that they already implemented the load-screen-death fix, it might still be quite a few seconds.

considering 233Mhz 1 core cpu and 32MB of ram where the requirement when diablo 2 came out and modern computers can easily have 20x that cpu speed on budget cpu with 6cores/12 threads and 1000x that amount of system ram it’s no wonder things can load faster. The entire 650MB game install could be run on a ramdisk and you would be using 1/3 the amount of ram Chrome is using on my computer right now.

Its too bad they could not make a legacy version with no updated graphic option so you could play with short loading screens but with better resolution. Would prefer that.

There was an issue in Tech Alpha that loads after taking TPs were pretty long. Even loads into Acts.

This won’t be addressed in beta but I can confirm that the team has been working on a fix for it and it will be available for the retail launch game. It just didn’t make implementation into the beta builds.

Are they also addressing the issue of Ultra wide screen monitors being an issue? Especially for PvP.

What about wide screen monitors giving an advantage?

While we’re smashing the blue post with unrelated topics.

Shared stash. Classic. They have to make this happen or consoles will be ruined for Classic.

Actually was wondering if we’d be presented with a change log for the beta? Not entirely necessary I’m sure but it’d be interesting to see what has changed since the Alpha tests.

if they trash ultrawide support because a vocal minority is complaining about a game not being balanced around the lowest common denominator it will be a sad day for the gaming industry.

I mean…the devs did openly state how ultrawide monitors could impact the gameplay negatively if not mitigated soooo…I think you’re being a bit hyperbolic here, for sure.

You’re thinking of the extreme. We’re thinking more, you know… normal… this doesn’t mean they have to sledgehammer everyone who owns a wide screen monitor, come on get your thinking cap on

modern computers can easily have 20x that cpu speed on budget cpu with 6cores/12 threads and 1000x that amount of system ram it’s no wonder things can load faster.

I think, it’s not about modern PCs here… look at this WP travel from a beta gameplay right after the 3:00 minute Mark. Unfortunately it’s in German, otherwise you guys could also directly here from the extra old, non professional commentary style, that this video is older than YouTube itself lol 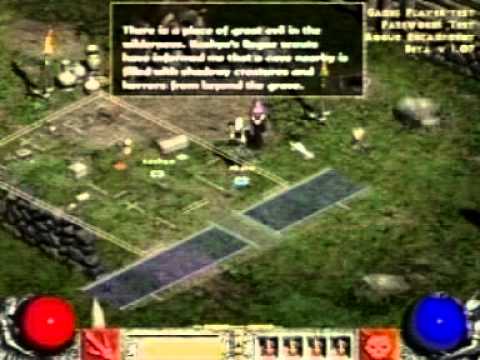 The travel is instant and I really hope, that in D2R it is going to be at least almost as fast as that.

As I’ve mentioned prior - Not possible, at least for another decade at the worst.

Nobody has a rig capable of loading all of that instantly. It isn’t possible… yet.

I’ll be pleasantly surprised if it’s any faster than 3 seconds for any of the loading screens.

yeah how bout that my mans

if they trash ultrawide support because a vocal minority is complaining about a game not being balanced around the lowest common denominator it will be a sad day for the gaming industry.

There is a big difference between an imbalance and something, that lets some players have solid 30% increased view over others. Especially because the devs said, they don’t want to spoil PvP and mechanics in general.

Gaming magazines usually had quite potent setups back in the day, so it might not be the best example.
They also might have cut around the loading screen (voice-over was most likely added later).

But of course you have a point, the original load screens were almost not noticable. But - as others have said - they existed and you would have them more noticable with a bad computer or with network delay.

The travel is instant

did you not see the fade to black? it’s not instant that was a loading screen also we don’t know if that was the game running on minimum system requirements which were pcs released in 1995 for a game that came out in 2000. it’s like an elevator in a game isn’t actually an elevator it’s a loading screen. also as someone who played on dialup the loading screens where much longer on battlenet back in 2000

did you not see the fade to black?

It’s the exact same thing, I have now with a PC, that pretty much exactly has the recommended specs for D2R. Hence, no matter if the black screen is technically a load screen, it has always been <1 sec and does not influence the game experience at all. You can go through your TP and open a new one instantly. That way, you can sometimes get out of hopeless situations.

Sure, all I am saying is, that it is the absolute standard for these black loading screens to be extremely short / quasi instant.

That’s why it is concerning to me, that the loading screen in D2R might be much longer and have varying lengths. That way, you can simply not use back to back TPs as reliantly as in Vanilla D2.

Also as mentioned by someone else, the flow of the gameplay might suffer. So hopefully, they can bring these load times to a good minimum.