We absolutely can do better, within reason. But we have a lot more going on beyond Diablo III .

So D4 and DI is “beyond” D3… It’s almost like you guys are treating D3 and it’s players like an unwanted child. I truly believe D3 has the potential to become a better game, and possibly see it as one of top most played game. This community has been pitching tons of great ideas to improve the game but I see little to none actually being used.

To be fair, Blizzard has been doing their “Soon” garbage since as far back as I can remember. The first time I visited game forums was while playing Diablo 2. It’s been “old” and tiresome for 20 years. It’s just gotten worse.

What is happening with Diablo II?

But not making one patch doesn’t mean it will never happen and that you’re not being heard.

Look at the Lamentation fiasco. A massive thread. Huge support. Huge amounts of likes. A massive upswelling from your player base, and the one and only Barb build that would have been competitive with other classes has been gutted and we’re promised that you might revert the nerf at some time in the future.

Barbs have been hearing this for so many years that we no longer believe it. We’re no longer listening to what you say you’ll do, because it’s not the same as what you actually do.

Agree. We’ll only look at the number/ actions. No more words, no more promises. They’re meaningless.

Feedback is never too late?? When will you make it so Barbs are able to do impressive DPS and hold their own? I mean, you let Wizards be on top for years. Vyrs/Chantodos has been easily the top for two patches straight with no nerfs at all, yet from what I’m reading barbs aren’t even given the chance to be on top for one patch. Why not allow the 200% multiplier for S19, and then maybe bring it down to 150 the next patch, then 100% the following if still needed? This would be a LOT better and make us Barbs feel better about playing. Instead you made it so Barbs will still need to be zdps AGAIN. So when you say feedback is never too late and that it might not make THIS patch… well… you kinda of lose credibility there. Its mind boggling how Blizzard doesn’t seem to get that.

They locked Free’s thread. What the…
Just when you though it cannot get any worse…

If this is improved communication, I hate to see what improved game will be…

It’s never too late to give feedback, and no balance change is necessarily 100% permanent. Diablo III is a live, actively supported game, one which we are committed to updating for [
the foreseeable future. It won’t make this patch, sure. But not making one patch doesn’t mean it will never happen and that you’re not being heard.

Well that’s the thing. There is plenty of tine to respond to feedback in general and stating what the development team wants.

Often we have no clue about the goal or direction desired, and thus feedback is given in all directions. And especially with new sets introduced it can be rather frustrating. Take the new monk set, we had no idea what the idea behind it was, so a complete overhaul was suggested. That is wasting our time and our tune if that is not the goal of it.

And changing numerical values aren’t difficult neither is responding on Crusader set to say Heaven’s Fury would be added. It’s not that much work required and will help keep things in line.

Also consider bringing back PTR patches. There’s a lot of things that can be derrived sooner that way, without hurting the experience of a new season, because things aren’t completed yet. Seasons doesn’t really return or stay, so when things aren’t up to par with a current season, it feels demotivating.

There I fixed for you: 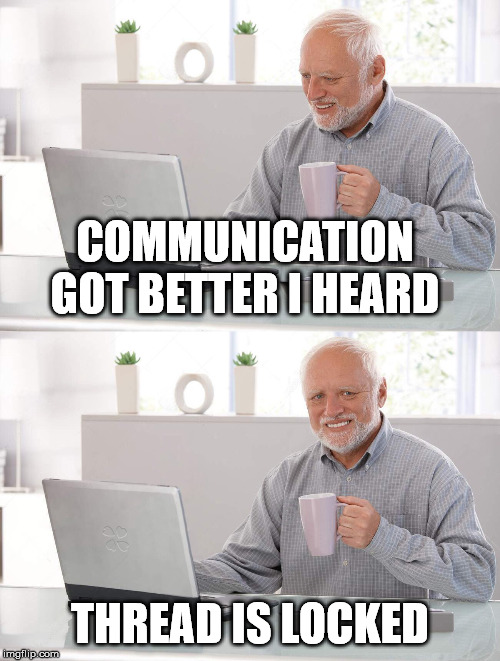 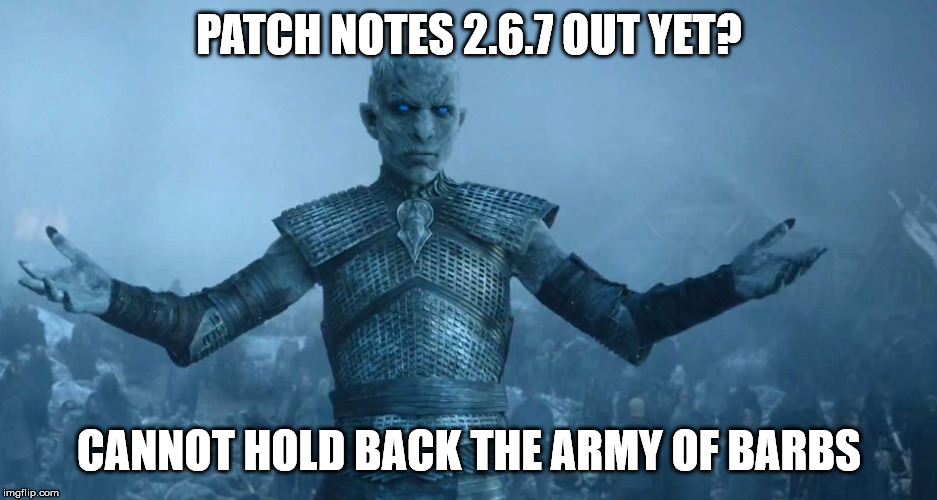 It’s never too late to give feedback, and no balance change is necessarily 100% permanent.

Blue post’s - everytime the same quality - “we care” - we dont have time to write some quality post’s"".

Leaked information, I found the name of the new barb set:

(Note this is a joke)

“I just wanted to respond to the subject of little to no communication with, ‘You’re wrong’. You’re welcome.”

no balance change is necessarily 100% permanent

It only took us 4 years to get Mortick’s!

So we’ll get a top tier Whirlwind build around the same time Diablo IV launches!

Nope, the name of the new set will be “Bul’ Kathos’s Disappointments”

And when is no longer relevant.

Nevalist is not to blame, she is but a messenger. The problem comes from the top. The complete lack of touch with its own public, like they have shown in D:I that Blizzcon when they got Bo’ed. That’s the simplest image you can get on how disconnected Blizzard is from the Diablo community.

They should postpone the patches and run more tests