Rage and I don’t play Seasons so we need someone else to test it.

I’ve been playing seasonal on PTR. What would the test be to establish this?

Equip ethereal weapon, clear off all additive damage bonuses, hit with rend, check damage. Then equip Berserker Rage passive, hit with rend again. If increase is 25%, ethereal is multiplicative. If less than 25%, additive.

Also want to clear off unnecessary multipliers like Ambo, Lamentation, Wastes6 so you don’t instantly kill your test subject.

These are no more than temporary new toys with the season restriction.
The weapons, with the right stats for a build, work well.
Grandfather wins.
Doombringer and gimmershred are fine for farming and speeds and some moderate pushes.
New boy toys…

I have a Doombringer with Bastion’s Revered power on it, which means I’m using the Ethereal and Oathkeeper equipped. I’m currently running with The Furnace in the Cube but I can swap in the Messerschmidt power instead and see. I still suspect not, but I’ll let you know.

Best I managed was that the “clock” on WOTB had about a third of the way to go when it dropped from the hero. At higher GR levels, where trash dies less frequently, that’s going to be even less.

Cool. Maybe on a full build with 40CDR and an enchantress can make it happen

Here is the numbers for you rage , nothing equipped nothing in cube only ethereal worn , rend numbers ticked for 1563 , went ahead and selected berserker rage and it ticked for 1954

For speeds, yes, absolutely. For pushing, no- you don’t kill things fast enough, plus TS: Falter is going to eat a bunch of MSR procs.

Here is the numbers for you rage

Anything else you need testing give me a message

It depends on the ethereal.

You can see all 21 ethereal types here.

Shouldn’t make a difference, since that just modifies your base damage the way damage range on a ring would.

Even if MM used one of those (Grandfather) for the test, it would have the same value whether or not he had Berserker Rage active.

The result is pretty conclusive: it’s multiplicative. Now, was that what they intended to do? Who the hell knows!

The test was carried out with nothing in cube , 0 in paragons , and nothing equipped apart from the grandfather weapon , only thing I changed from first number to second number was add berserker rage

Equipped a Doom, 2.758M->3.448M when berserker rage activate. It should be multiplicative, which agrees with my observation.

BTW, Grand Farther 800 max dmg not show in weapon, but it is calculated in sheet dmg.

Hey JF, nice to see you! How you been?

Thanks for the extra test on the ethereal. 100% that it’s multiplicative. And yeah, the +X dmg from paragon is just like damage range on a ring, which shows up in your sheet but doesn’t modify the weapon itself.

I saw some H90 equipped with Grand Farther

Indeed. I changed to a Grandfather (equipped) with Oathkeeper cubed…
https://i.imgur.com/L9kDwnz.jpg

With the amount of time I had left on the GR116, I reckon I could probably get this to GR120 before thinking about augments. Oh, and this is without Aughild’s, as I haven’t farmed Bounties for the plans, and none of the Odious Collectors I’ve bashed up in Ancient Vaults have been co-operative enough to drop it for me.

A multiplier that shows up in sheet. That’s a first, I think. And considering ethereals offer a multiplier and also get a large damage buff based on Paragon, there’s no question they will outperform pretty much everything, period, regardless of activity.

Side note: since these weapons offer a potentially large global multiplier, they will buff skills/off-meta builds that horrifically underperform. It’s not gonna take Boulder Toss to GR 130, but it will make many whacky for-fun builds strong enough to efficiently farm T16 and maybe low GRs.

It’s a shame that this idea wasn’t more widely implemented earlier, and even more of a shame it’s restricted to Seasons ( 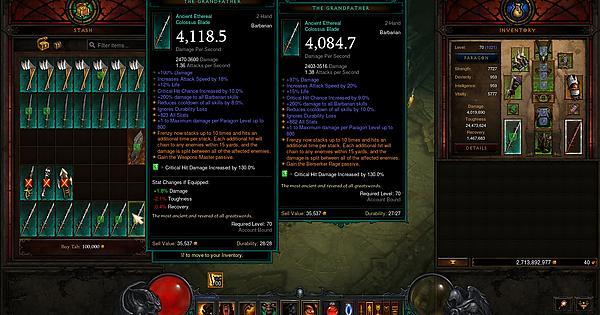 Current top Wastes clear on PTR is a GR130 in 9 min 53 sec, done by a Barb with 1366 paragon, and a two-handed Ethereal with Ambo’s power on it and Furnace in the Cube.

If I remember right, with Rend the IB armor buff gets you something like 14% extra mitigation. Not bad. But, the ethereal damage buffs are just so big, you’d be FAR better off just dropping Mantle and picking up Stone Gauntlets for extra mitigation, while carrying any of the Ethereal weapons. (also, if you use Doombringer, that gives 25% mitigation, which is better than 14% from IB…)

Same thing goes for running Grandfather rather than Doombringer or Grimmershreds. It does look like it’s a full 50% more damage from the multiplier, and another +13% from the “+X from paragon” bonus, for about +70% total, on top of the higher weapon damage. So, again, if you have trouble staying alive, you’d be better off just running Stone Gauntlets rather than Mantle, and carrying Grandfather, rather than going with a dual-wield option.

I’ll do a full write-up on the numbers for every set once we see if they make any further changes in the PTR.