Challenge Rift of the week, Rank #1 on PS5

Easy Challenge this week, don’t even bother for the shield Pylon at the end of the first floor, you don’t need this to survive, so move on.
See the location of elites on my route and you should have no issues at all to clear this one.

See you next week!!! 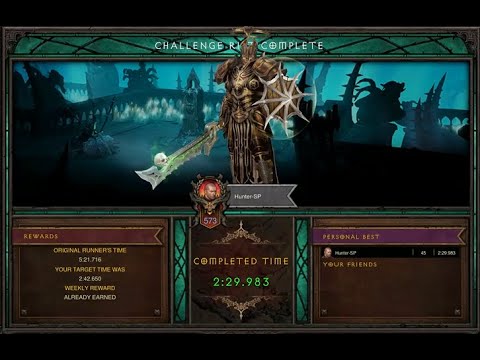 Nice!!! If I have time I will give it another try on this one.
I’ll let you know in case I have an update!!!
BR

Yeah man. Its too bad you dont get anything like additional bounty bag to make it more worthwhile. I made a post about it some years ago. A small incentive to give people a reason to aim for better time.

The dev have been taking mercy on us with these ever since since those two insane ones that were almost impossible to beat.

I haven’t played one that wasn’t unbeatable, but will say playing groups is the go to if are looking for just the mats. RNG is a big factor for some of the builds like getting immediately crits on elites to one shot them in some cases. They have been relatively easy recently, but yeah there have been ones that have been hard in comparison. The main reason I like them because you are 100% on even playing field with other players, so its the actual best competition compared to actual seasons since a lot of RNG factors come into play in seasons whereas, everyone is playing the same build, same map, etc. and is more skill involved. I think additional bounty bags for top spots would be a nice incentive and also for in seasons as well.

On the Asia server, they have more cosmetics, so maybe get rewarded with being able to pick one from the big list. Thing is there are cheaters and hackers are on every console except xbox, so it makes it a mute point unless they fix that problem first. Just small changes to make the game more appealing. I have others like QoL changes or Ubers Rifts and primals mats as an example.

Thing is there are cheaters and hackers are on every console except xbox, so it makes it a mute point unless they fix that problem first.

Is there an actual way you can cheat on a CR?

No. Im talking in seasons. Modders bring in modded gear on switch and playstation. It takes away competition on those consoles for people who play legit.

Is there an actual way you can cheat on a CR?

Yes. Not by cheating the character but the map/environment, like getting a full view of the layout (where elites are, what they are, affixes, pylons and such.)

Maybe on the PC version of the game, but there’s no way you can do that on the console version.

Huh? That isnt cheating. I normally play through the entire CR without spawning RG to get a feel of the map, then restart it to get a better time. If you could only play it once, then sure I could see that pov, but you can do it infinite amount of times until it is switches next week.

If you are talking of thud, that isnt on console.