A toxic topic that's breaking ToS, please shut it down

Topics posted on the forums are meant to stir meaningful debate. Spam is also forbidden.

At this point ploot has been discussed extensively and the devs have said it’s not being implemented at launch.

The ‘debate’ is now just a toxic mess, and the topic itself has become spam. It doesn’t matter whether you’re for or against it, it’s doing more harm than good to the community.

So I would kindly request that all threads mentioning, both current and future, are shutdown.

Moreover, the one the moderators consider to be the most useful/least toxic should be pinned for posterity with a note by a blue attached.

Edit: Just to be clear, there’s nothing wrong with discussions on a topic. And it could become relevant again in future if the devs ask the community about implementing changes. But this ‘conversation’ has become divisive. Both pro and against are to blame. Which is why I think it’s time to put a stop to it for a while so that we can focus on what matters: the game that we all love.

Personal loot is a function that some arpgs have, so it’s fine for discussion here. Just because you don’t agree with the idea doesn’t make it spam.

Although Rod Fergusson himself said that ploot is not coming, he also said discussion about it is fine. How else could we possibly come to terms or some sort of unified agreement on possible implementation without discussing it? (For the record, I’m not in favor of ploot)

If you don’t like ploot discussions, I suggest muting the threads.

I agree, it needs to stop.

Discussions are fine. As I said, this has been discussed extensively, dismissed by the devs and the conversation is now just toxic and counter-productive.

the devs have said it’s not being implemented.

Before release. Post release is still open for discussion.

Its because both sides are generally too busy trying to belittle one another that they are unable to work together to find any common ground.

I suggested ploot for bosses only, and I’ve seen both pro and anti plooters say that isn’t a half bad idea.

Since Rod Fergusson himself said on twitter that having discussion on alternate loot systems in D2R is fine, I disagree with the OP. Rod Fergusson is the head of the entire diablo franchise. Moreover, he has said that the Blizzard team continues to have this discussion.

I do agree that it might make sense to consolidate threads or have less threads appearing where discussion focuses in pre-existing threads.

TBH there’s too many threads about it and the current conversation seems never ending and looping infinitely so I guess enough has been said already.

It actually is spam. Everytime someone creates a topic, someone else will make a new one when the old one doesn’t get bumped up. It’s the same discussion and arguments since the start of the D2R forum. So yeah… it is spam.
Once in a while someone tries a new reason or tactic why it should be discussed but they usually have no clue what they are talking about.

I agree. This is nonsense they keep letting these ploot threads up. At this point it should be a 1week ban for any pro ploot posts going up. This is obnoxious. Cannot have meaningful conversation with this going on.

Its literally been stated by Devs : Hard no to ploot - and now these irrational, insane, delusionists are flooding the forum making it impossible to hold any decent conversation.

Its really degrading the quality of convo because were tired of debating dead horse topics. Hope the mods will help out

Agreed but what is more is that we got confirmation from Rod that it won’t be in D2R, his quote exactly was “relax people, we are not doing it”, yet the ploot spam still flows.

Its literally been stated by Devs : Hard no to ploot - and now these irrational, insane, delusionists are flooding the forum making it impossible to hold any decent conversation.

Absolutely, I agree one hundred per cent, i miss the days when everyone on this forum shared their excitement for all things D2, but the plootists just turned it into an S-Show, even after the confirmation.

The problem isn’t the discussion of ploot, the problem is the people making new ploot threads every 10 minutes with the exact same people responding in the same way on all of them. The mods should combine all these posts into 1 thread.

wanna know why a lot of topics of the same type are made?

I constantly get flagged and put on hold, not because i break the forum rules, the flag reason is always “trolling” just because people disagree with my view of what D2r could/should be.

Do you really think moderation will answer your request when they dont even care about flagging abuse, harassment and the fact that the flag system has been mass weaponized to silence people you disagree with

The problem isn’t the discussion of ploot, the problem is the people making new ploot threads every 10 minutes with the exact same people responding in the same way on all of them.

Yes you make a good point, this is what I have been saying for a long time now, there is only so many times you can have the ploot debate with the same people, this feeling was exasperated even more after Rod’s confirmation of no ploot.

Rod had 4 tweets on August 30-31 with relevance to the current topic. The second tweet was: 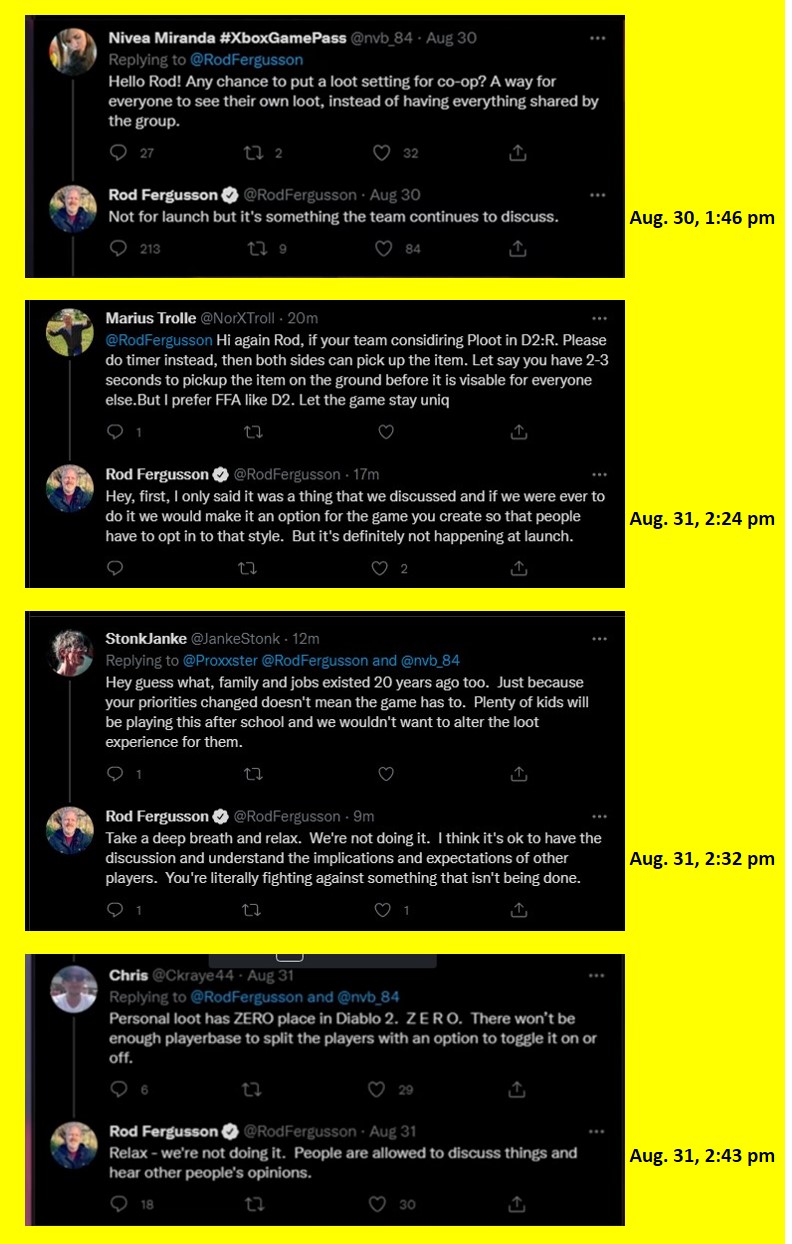 The problem isn’t the discussion of ploot, the problem is the people making new ploot threads every 10 minutes with the exact same people responding in the same way on all of them. The mods should combine all these posts into 1 thread.

In reality, since it is the exact same people responding in all of them, one wonders why the umpteenth thread adds any value at all. I mean, beyond the people dedicating many hours and thousands of posts trying to push the agenda.

I get that people are excited for release, and while “not yet” doesn’t entail “never”, thousands of posts here, including selective quoting and “gaslighting” of any contrary view, isn’t a good look for a “discussion”. So it’s no wonder that Blizzard ignores those threads.

MicroRNA I can’t see your comment, it’s just your name and “ignored content”, I have repeatedly told you that you are muted and ignored, yet you keep replying to my comments… If anyone can answer me this I would be very appreciative, but how do you ignore someone who is already muted and ignored?

Your literally trying to turn this thread into another ploot debate…

Eventually, the posts just resemble a blur like a Jackson Pollock - or like a drunkard’s puke on an NYC sidewalk. Aside from the unpleasant smell, it becomes fairly easy to ignore those posts. Much as Blizzard does.