Well, give them some time

California is an oddly relaxed place. Most work does not start until between 9 and 10am. Blizzard in particular tends to do that and they stay later in the afternoon instead. It matches up better with when gamers in the US are awake and playing.

I am sure we will hear something later today. Let them have their coffee first

It’s almost 20h00 in the EU. I just got the message while playing PTR that a new patch is available. But it is not starting yet, so I guess it is being deployed now.

Is there there an updated notes? I’m on lunch at work. I check the notes a little bit ago but they looked the same.

California is an oddly relaxed place. Most work does not start until between 9 and 10am. Blizzard in particular tends to do that and they stay later in the afternoon instead. It matches up better with when gamers in the US are awake and playing.

It’s less a California thing and more a games industry thing for West Coast developers. We start a little later because it matches up to when the rest of the US is active - we’ll still be in the office when the East Coast starts to hit peak gaming time.

I do have an update though - we’ve just finished deploying the PTR patch! I’m in the process of hitting all the buttons to update patch notes. That’ll take a bit, but they should all be up and available by 11:30 AM PT this morning, after caches update and such.

You may notice the Leaderboards are currently locked; this is because we’re in the process of draining them for your testing. That should be done within the next half an hour or so as well.

Edit: I just finished deploying the NA English patch notes, so those should now be available in the launcher and in the blog. If you don’t see the updates, consider clearing your cache/cookies and reloading the page.

@Nevalistis Buff Impale damage, the highest impale clear right now is Gr120ish, around Gr127… there ARE many other builds doing above this level… it won’t hurt if you buff Impale come on bro.

I was just in the PTR, in the middle of an Act Bounty, when I got disconnected, receiving this message popup: 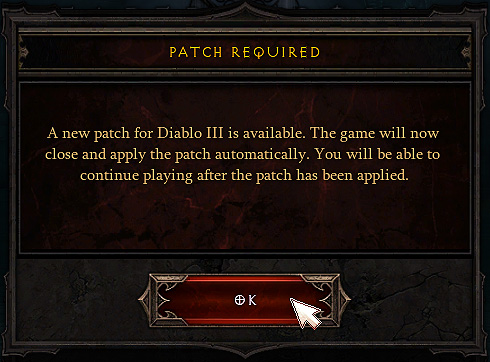 I tried restarting D3 a couple of times and continued getting this message. I thought that maybe the PTR had ended and came here for more information.

That’ll take a bit, but they should all be up and available by 11:30 AM PT this morning, after caches update and such.

I will try again later.

@Nevalistis Buff Impale damage, the highest impale clear right now is Gr120ish, around Gr127… there ARE many other builds doing above this level… it won’t hurt if you buff Impale come on bro.

Demon hunters are dead and even more so in the next season since DH cant even use the seasonal buff considering that our builds require 3 specific cubed items, but even if we could swap one it doesnt matter anyways because every class will just cube furnace which we cant cube giving them 50% more dps than us. This will result in the DH being the worst class by a large margin in the next season.

it won’t hurt if you buff Impale come on bro.

Does any one force you to play dh each season?

Buff Helltooth Gargantuan to do AT LEAST GR120-130 solo, that won’t hurt. This set cannot do even GR115, that’s how weak it is. I dont know why they dont just buff weak sets, and its not gonna be gamebreaking or anything, there are builds doing 130+ out there with less than 2K paragon. Helltooth Gargantuan u can have 4K paragon and u still can’t do GR115, that’s how weak it is. lol

Thank you for adding the QoL crafting mats, it really helps big time for re rolling to ideal stats to meet test requirement for builds. Hate to demand something with such nice QoL additions but nevertheless, what are the possibilities of adding Marquese/Imperial grade gem bags to vendor?? Although we have UNLIMITED mats now, some jewelry re rolls still in shortage of these low grade gems. We can probably farm rift/vaults, but the process really consumes valuable PTR times. Perhaps its too late for this PTR, i ll try to re post before next PTR launch to see if there are possibility of gem bags

what are the possibilities of adding Marquese/Imperial grade gem bags to vendor??

Marquise and Imperial Gems flow freely in Bounties and Rifts.

We are not worried about flawless royals.

Bounties are completely waste of time and not interested in even 1 sets.

Rifts are controlled with focused key pickup only. Even puzzle rings are kinda wasting time.

Low gem bags helps with getting test gears rolls properly. Situation is now we have 1 million crafting mats capable crafting gg primals but lack those gems to roll the jewellery.

Ptr time should be maximised on testing builds. T16 farming factors should be eliminated. Nothing needs testing deeply on t16 level.

It would be really great to also add hellfire amulets crafting materials to the bags so we can easily test with this as well instead of doing the slumbersome boss and restart game combi’s.

Yep imperial gems is the last remaining headache, and jewelry rolls are the most important lol, they can’t win oh well. At least you can make a bunch of ancient puzzle rings and farm goblins for them.

You can buy bags of fortune and just convert the gems. What’s the problem?

As celtic08 pointed out, the problem is not having Marquise and Imperial Gems for enchanting Amulets and Rings.

Bags of Fortune contain 1 Flawless Royal Emerald. This is good for Weapons and Armor. Especially since they can be converted. But, they cannot be used to enchant Jewelry.

It doesn’t take but a few GR runs to gather the lower gems needed. I mean they do want you to actually play the game a little. And again any gems you really need can be converted in batches of 9 regardless the quality.