Before Blizzard officially releases Patch 2.4, I wanted to propose a buff to one of the most nostalgic items in the game, The Grandfather. The developers did say nothing is off the table and the chance this would be implemented is extremely remote, but nonetheless wanted to share a few ideas to Make Grandfather Great Again #MGGA… 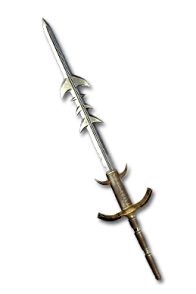 I don’t think 2.4 will have anymore changes to items, but I hope 2.5 will have a big item overhaul patch.

You’re probably right, but hoping for a 0.001% chance the developers could surprise us with a little something extra in the patch.

Well they can take notes for shure.

Man, I remember gearing up a WW bar before 1.10 runewords with a a SS and 40/15 Grandfather and going right into cows games. Honestly the custom 2d art on the sword is amazing. Stands out a lot.

Sadly the Grandfather and Doombringer went the wayside with 1.10 runewords.

Enigma was a mistake, in all seriousness.

There are some runewords that should’ve stayed Ladder only. It was their only porpuse, to hasten Ladder progression, and force players to trade, grind and get the economy moveing, during Ladder.

totally agree with this

I tend to agree with you.

On another note, it would be pretty cool if the developers gave The Grandfather a bonus to experience gained, which fits the name perfectly.

That’s how I would fix it.

That is way the Heck too good.

That is probably too strong, and would remove crushing blow, the 4 open sockets, and ignore target defense.

I like the deadly strike and open wounds on the Grandfather. Plus IAS and All Res is more than plenty to make this a solid choice.

You know what I would do, since we’re on this topic. Keep it simple so its still the same item, but add one fundamental swap out to make it amazing, potentially.

As CharlesJT said, remove Indestructible which allows it to drop as ethereal. But instead of adding or changing any other values, all it needs to become insanely good is one small mod. Adds 2-3 sockets.

That’s it. That way, its still a good cheap 2h sword (non-eth, 2os) version, but if you get a 250%ED eth 3os, you now have a god tier weapon on your hands. Its now a proper chase item. Those three open sockets you could throw in a Zod, & 2 40x15 and now its on the same level as a top tier BOTD. It still gives players a budget option (a ghetto gf) by having a decent rolled non-eth 3os by being able to put like 3xshael or something similar. If going WW, you still got options with ED% jewels, too.

For the record, a perfect 250% ED eth 3os Grandfather in this way, would give it the following damage:

and the 30% IAS would make it very fast attack speed which does cut into a lot of break points. As a WW barb you could even put in 2x Ohm’s for more top end damage or slap some Ber CB for pvm. Ethereal also having a really nice side affect of reducing the required stats, giving barbs far more health too as they don’t need the same stat requirements. A lot of little fundamental changes go a long way here.

Thats a good idea and would make finding an Eth Grandfather worth something with 3 open sockets.

I still like the idea of adding +X% To Experience Gained as it fits its namesake.

Yea I relaly hope they do overhaul unique and set items more. They are mostly garbage and that is very disappointing. There are so many fun weapon concepts that just do nothing. They should cange Indestructible to Self repair. Then it can drop eth and you don’t have to Zod it so if it could then get at least one socket for a shael or something then at least you do some solid damage output.

Make it a Greatgrandfather😃

The Great Grandfather, love it.

I was hoping the overhaul to the sets would bump up the class sets.

I would like for the sword to have these things:

The goal of it would be to be able to drop better weapon than Grief. While it would be damn hard to roll such a thing and therefor a prestige item to have/hunt for eternity.
Ethereal, 2-4 os, 150-250% enh dmg are 3 random stats that need to roll good to have a best in slot weapon.
If it doesn’t roll ethereal, its still nice weapon to use temporarily.
If it does roll ethereal but 2 os and 150% enhanced damage then it is not stronger than Grief anyway.
If it does roll ethereal and 3-4 os and near 250% enhanced damage then it can be on-par or stronger than Grief