Hey everyone, I am hereby sharing my hybrid bone/summon necro build. This build is specifically designed to kill P8 bosses as fast as possible, without having to worry about raising an army each game. Patch 2.4 buffed Bone Spear/Bone Spirit synergies, so it is a bit easier to reach high damage by also using a hybrid necro build.

For ladder Season 1, the build relies on heavy physical and magic damage, so it combines the best of both worlds. Bone Spirit and Bone Spear damage lead the way for magic damage whereas your mercenary empowered by Beast Fanaticism leads the way for physical damage.Feel free to ask any questions you may have. Enjoy the vid! 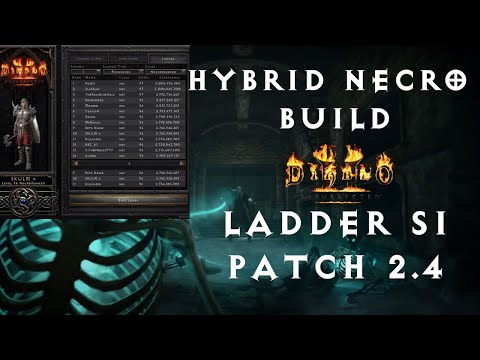 i mean the worst decision was going beast instead of white or something useful for plus skills. beast is just dumb when you have weak summons.

i mean if you’re just going to be a typical boring corpse exploding clone, why not empower your bone spells more and just leave the summons as meat shields instead of wasting might merc and beast on them.

here’s some advice, you already dumped the house into beast, just cap skellies, forget bone spear. i mean you even have enigma for gawd sakes.

i mean honestly you should just get a White and give the beast to your summon druids and call it a day gg, nice booner, nice bearboy.

what you’re doing now is like a kid that loves pizza and also loves cake, but you make a cake pizza and it isnt going to taste good i’ll tell you that for a fact.

Following on your hate on my dclone post, I also see you are also being toxic here as well?

From the looks of it you did not understand anything about the build. It’s a very fast paced P8 boss killer which does not rely on raising an army. It is extremely versatile.

Your advice is bad btw. I still suggest you go see a doctor asap.

you lied in that video, and all i can think is that someone so dishonest and so bad at understanding builds and mechanics must be someone who cheeses and probably buys their gear from d2jsp and doesnt even know how to use it.

your build video is funny because it just Urdars crushing blow doing all the damage and any necro with 1 point in revive can do this forever. Did you just start playing d2 in the last few years? no veteran would even bother making a video like this, it’s pretty common knowledge that Urdars do this.

Wow, I just don’t tolerate toxic people like yourself.

I will just ignore your posts from now on, because obviously you have no idea about what you are talking about.

well, at least i dont have to compensate for lack of knowledge and skill with 3rd party website forum $$$.