When can I connect D2 battle net?

It seems like I got IP ban since I’ve been using VPN.
It is quite strange I’m mostly using VPN and I’ve never got IP restriction before.

But, It has been started on Dec 15th, and It’s been already 2 wks and still I can’t connect D2 battle.net.
Also I’ve seen many posts that it can be extended I’d try to connect battle.net before restricted time.

Could you let me know when I can connect D2 battle.net ?

Hello, here is some information about your situation you may be able to use to determine the time frame:

You are not allowed to play on Diablo 2 Battle.net servers with an active VPN, while behind a proxy and/or if you are using a business class internet service provider. All three will automatically restrict your access to Battle.net for exactly two weeks from the last occurrence. While a restriction is in effect, attempting to connect without any of the three being true will not reset the duration. Blizzard will not remove the restriction for any reason.

Be sure to disable the VPN before playing Diablo 2 on Battle.net and/or don’t try to play at work and you’ll be fine.

Brief history on why this is the case: Hackers, item farming bot runners and illegal item selling advertisement chat spam bots were using a combination of business class ISP’s, VPN’s and proxy setups to engage in their game ruining shenanigans/money making schemes, which was ruining the gameplay for everyone. Due to the games archaic game code and net code, restriction of Battle.net access for usage of VPN, proxy and business class ISPs was the best solution they found to keep the servers stable.

I am not sure when was my last attempt to log-in.
Any idea from customer service? I dont wanna make my restriction reset the duration.

As long as you don’t attempt a connection with the VPN active, it won’t reset the restriction timer. So attempting without the VPN just to check if the restriction is over won’t hurt.

However, you can submit a support ticket to find out the duration of the restriction. You can start the process here.

Hi, I submit a support ticket, but seems like I haven’t got any response. Would you help me out ?

Ticket times are averaging 2-4 days. Unfortunately, folks just have to wait it out.

.
And the best of it if your not happy about they bug the game they says we give you the money back

.
if somebody pay for something its because they want what they pay for

Bliz doesn’t block log ins just for fun, EBAH15, nor is it a bug. It’s done for reasons specifically meant to mitigate illicit activities. As long as the behaviors aren’t repeated, the log in restrictions are temporary.

Oh ok so you mean i do some illicit activities dont you ?
i never mean bliz block log for fun like you said but thers some CLIENTS who paid for your products and you block them to play the game they paid ?
What kind of buisness you are ?

Oh ok so you mean i do some illicit activities dont you ?

No. I mean that there are people who do and the restrictions are meant to help mitigate their impact.

but thers some CLIENTS who paid for your products and you block them to play the game they paid ?

If legitimate players behave in a way similar to illicit players, even accidentally, they will be restricted. In those cases, as long as they don’t do it again, they won’t be restricted again. Like I said, it’s temporary.

What kind of buisness you are ?

It’s not my business. However, like I said already above, Bliz does this to help preserve the integrity of the game by reducing the impact of illicit players.

Ok so explain to me why i buy yesterday the game i instal it and when i go to battle net im restricted ?
I dont understand

i play for years diablo 2 and its the first time ( and i weight my words … ) they did this ì can understand for the players who play bots , maphacks , did some hacks etc … but did all the players need to pay for them ? why they just dont bann them forever ?

Ok so explain to me why

I don’t know, EBAH15. I don’t anything about how you attempted to connect. There’s a fairly long list of behaviors that can cause a restriction. (The list is not 100% inclusive.)

Today I installed D2 to test it and I was able to log into Battlenet on the first try without any issue. So the problem isn’t with the game or the game service.

What you should do is contact support so that they can look into your issue.

The next step is to contact support for one-on-one help.

I can’t. But if your log in is restricted, support will be able to tell how much time is left. If you are not restricted, then they can help troubleshoot your connection problem.

ok thank you for your help but i dont understand about the files they ask on the support … Are you able to help me with that plz ?

If you click on the blue links, they will take you pages with instructions: 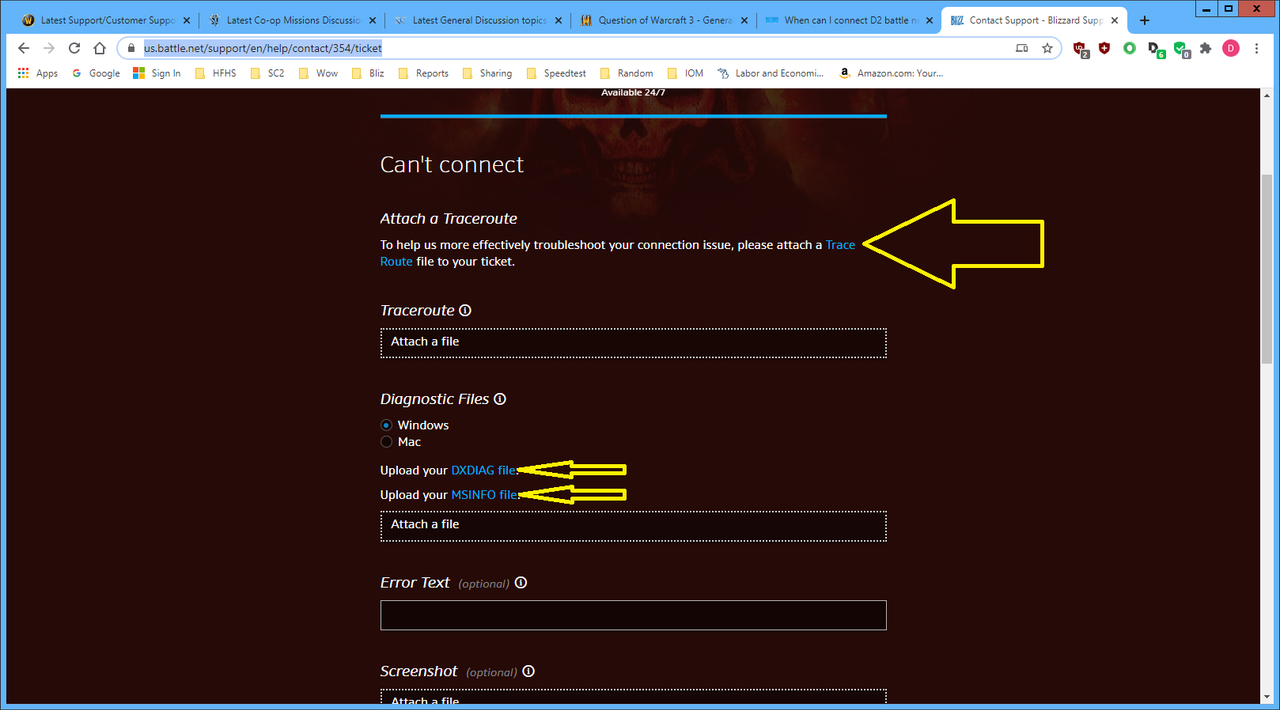 ok thanks again hope it going to work with it