If anyone from the tech support reads this , here is how the remastered Diablo II should look like 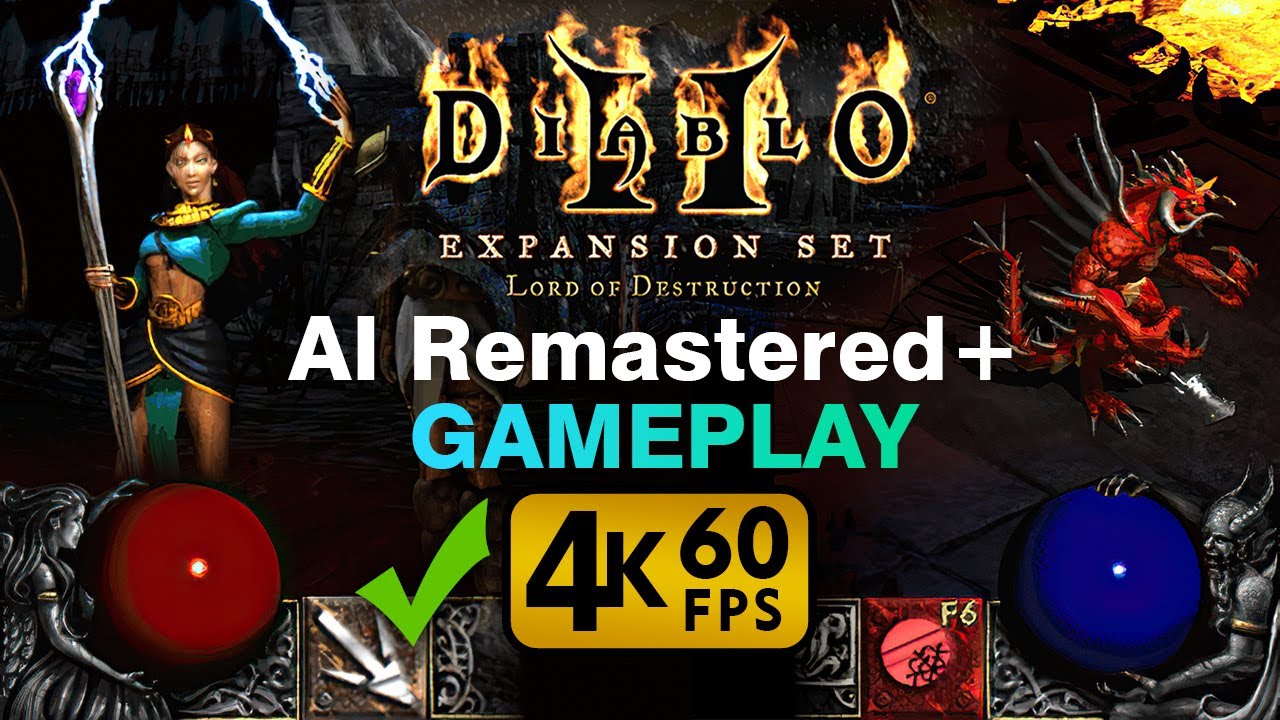 Keep in mind, this video is an upscaled/AI remastered/transcoded production of a video that was originally 25 FPS and the 800x600 resolution we’re used to seeing in game. This is NOT what was seen during gameplay.

Cant you do that Blizzard … like you did in Starcraft Broodwar ???

so will we get such update ?

For the Broodwar remaster, they fully remodeled every single asset, and re-rendered it in 4K. That would also work here, and there’s even rumors that they are doing exactly that, but who knows?

Many things weren’t perfect for Broodwar though. They changed the appearance of many units to fit the modern style of Starcraft. Artanis in Remastered looks nothing like the OG Artanis in Broodwar. The Protoss Nexus used to have a sphere on the tip, and now it’s a shiny rock/crystal that is noticeably not spherical. The same thing happened with Reforged. Many Reforged characters were changed to the current WoW style, or in a few cases completely redesigned. This isn’t always a bad thing, some of the redesigns look better, but they aren’t true to the original, and that will always upset some long time fans. These same imperfections would be present in a D2 remaster. I’d still like to see that remaster, and I don’t think that it’s enough of a reason not to, but it’s something to be aware of.

@Blizzard take my money and make remake like this…

Come on blizzard do that kind of remaster , atleast as first step!

Latest news Blizzard agrees to making the remaster but with very minor additions such as loot boxes, semi-complete outsourced cutscenes and character models, along with unrecognizable song remakes for all your beloved tracks. We also combined servers from the old game that’s right like Warcraft 3! so you gotta get the dlc that strips the original of more than a dozen features including the ladder system of course to play online anymore. We’ve also been developing a new pay to type feature that charges you anytime you write to a party member. I’m just a doofus and took like 8 minutes to write this dont hurt mee haha

Well, if they want a D2 remaster to flop, those are all swell ideas.

I think they learned a lesson from the War3:Reforged mistake. IF they are doing a D2 remaster (which I believe they are), I believe they will follow SC’s remaster model: Everyone gets the same updated game, the original graphics version (or classic) is free to play for everyone, you only pay to unlock the enhanced visuals. There will surely be numerous under-the-hood updates to address several issues that are plaguing the original. The new game client would also be connecting to the newer servers in order to disband the archaic original battle.net servers.

Time will tell. If it’s not announced within the next two years, it’s probably not coming.

I’de love to hear more on why you think they will possibly be releasing a remaster. I’m up in the air with it, leaning towards there’s absolutely no way. They would have to rewrite it all (including the game engine) and it would be near impossible to keep it the same. Brevik has talked on this multiple times. Diablo II was one of those happy accidents that got made into a huge success. (https://www.youtube.com/watch?v=RHF8MzhcKg0)

The biggest ones I can think of is Blizzard reps stating that they are aware and working on a resolution to the MacOS 64bit Catalina issue.
https://us.forums.blizzard.com/en/blizzard/t/diablo-2-not-working-on-latest-mac-os-catalina/820

There was a report that a new diablo 2 launcher/downloader was found and downloaded from Blizzards website, but it doesn’t do anything. The same was found 18 months prior to Warcraft 3:Reforged being officially announced.
https://youtu.be/46kDzkOm9dg?t=595

Then there is the recent uptick in Blizzard doing something about the botting issues and other connectivity problems.

There are other clues, but these are the big ones IMO.

Something is buzzing with Diablo 2.

But heres the thing, they could at any time scrap anything they may be working on… So it’s still a toss up.

@MacOS 64bit Catalina issue: I think that’s a huge leap. Fixing Diablo II to work on a platform it was made to support seems like it’s a critical issue that should be fixed anyways.

As far as the launcher goes, that’s an interesting find. Looks like they will be integrating it into the Blizzard Launcher like StarCraft and WarCraft 3. If they were able to figure out how to tear apart the Battle.net part of Diablo II, then it might be a good sign; however given the track record i’m highly skeptical that it will be any good.

As far as botting issues go, I really hope they are working on that. It’s been a number of years now since any real action has been taken (aside from mass bans a couple years ago i think it was?) so, I suppose we’ll see but i’m not holding my breath. I have a feeling all of this just happens to coincide with the new Battle.net integration. I have absolutely no doubt the team working with Diablo II (classic team) has a lot of passion and talent, it’s a matter of them being able to do it the way it should be done in my opinion. But, this is all complete speculation.

Absolutely, this is exactly how remastered to be made, preserve the original art style, game play, in short retain the core essence of the game and just remaster the graphics to 4K or to any modern standards

These are the latest rumors about a Diablo 2 Remaster called Diablo 2 Resurrected. You will need to replace the DOT with a . for the links to work. At 12 mins Diablo 2 game cover is on stage youtuDOTbe/TwJHhFuX-FI Twitter leak twitterDOTcom/Nari_Ju/status/1258091848939249666 Post www.actugamingDOTnet/blizzard-diablo-2-resurrected-sortirait-fin-2020-329561/ Can anyone confirm Diablo 2 Resurrected is real? Update forbesDOTcom/sites/paultassi/2020/05/10/report-diablo-2-resurrected-remaste…

I feel the same thing when developer stay quite for this long.