Class change not here yet 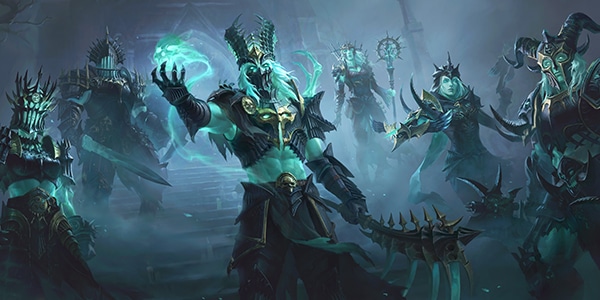 Transforming yourself in Diablo Immortal

Learn about how to change your class, plus cosmetics—including a unique one for pre-registration.

Character progression is incredibly important in Diablo Immortal. When you play games in the MMO genre, you’re focused on unlocking new abilities for your character and keeping up with other players on your server. However, Diablo games always feature a rich variety of classes with different playstyles and fantasies. This leads to a conflict: you want to play every class, but you don’t want to hinder your character’s progress to try them all. How can we let you do both? Our solution, arriving shortly after Diablo Immortal launches: Class Change.

In Westmarch, you’ll be able to change your existing character to a new class and a new visual customization. When you change your class, you’ll retain all your progress on Paragon levels. You’ll receive a new set of equipped items appropriate to your new class, and you can transfer all of your item progress and gems to them. None of your old equipped items or stash will be lost, and your progress on Horadric Vessels and the Helliquary will stick around too.

You will need to start collecting Legendary items specific to your new class, but that journey’s part of the fun of playing. And, if you regret the choice, you can activate the Class Change feature again, returning to your original class, or exploring other new classes you haven’t yet played. When you return to a class, you’ll revert to the visual customization you chose previously, and equip your previous Legendary items.

We didn’t want to force our players into the hard choice of giving up progress on their main character to support an alt. We also didn’t want anyone to feel obligated to keep a roster of alt characters to gather rewards and resources, or to match the shifting demands of Leaderboards, Cycle of Strife, or other competitive systems. Class Change gives you the freedom to explore classes that you get from multiple alts, but without any of those downsides. It also allows us to give full rewards to each new character you play, with no expectation you’ll share resources among them.

We want your original class selection to be a meaningful choice - not something you change session by session. So we’re discussing limits to this system that still give you freedom to try out new classes as we release new content. Because the process of collecting Legendary affixes is time-consuming, we expect players who focus on a single class will have some advantages, like a broader selection of available character builds. But the fun of freely exploring each class should tempt a lot of people into changing things up over time, like it has many of us on the team. Though Class Change won’t be in-game right when Diablo Immortal launches, we’re hoping to add it shortly thereafter in a patch.

Immortal is shaping up to be the most customizable Diablo experience we’ve ever delivered, but the variety we’ll have at release is just the beginning. We’re excited for you to join us in Sanctuary!

So that sounds great and all, but what about the people that have already made multiple characters and spend money on them? Is there going to be some kind of system to combine or refund ?